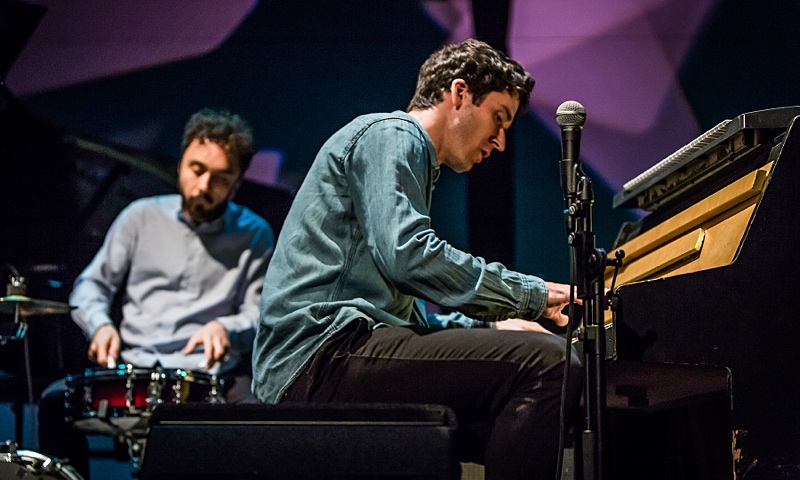 By IAN PATTERSON
October 17, 2016
Sign in to view read count

The golden era of Polish jazz is now. There is such a profusion of incredible talent. Now is the golden era.” —Pawel Brodowski, Chief Editor Jazz Forum

One of the great things about returning to Poland each time is the exposure to new jazz talent, because beyond the internationally renowned marquee names—the historic Polish greats—are a great number of outstanding artists. How could it be otherwise in a country that boasts over a hundred jazz festivals?

Wroclaw is home to Jazztopad, one of Poland's best-known festivals internationally, which has built its reputation in its first decade on commissioned work as well as on national and international showcases. Jazztopad moved to its new location in the splendid National Forum of Music in 2015, a building of modern design with highly advanced acoustics. The NFM was host to the European Jazz Conference 2016, where 200 members of the European Jazz Network, guests and invited speakers gathered for its annual meeting. Over one weekend, the days were given over to talks and working groups, (see separate article) while the evenings served up a generous sample of some of the best that Polish jazz has to offer.

Usually to be found at the end of a clarinet in a wide-ranging variety of musical settings, from collaborations with Ken Vandermark, Hamid Drake, Trilok Gurtu, Evan Ziporyn and Michiyo Yagi, to the southern Indian-inspired ensemble Saagara, Waclaw Zimpel is the epitome of the contemporary musican for whom genres are nothing but restrictions to the imagination.

For "Lines," Zimpel turned to the khaen, a bamboo mouth organ from Laos and Isan/North East region of Thailand. An urgent, chanting organ motif and long bass clarinet lines laid the foundations for keening clarinet improvisations. Like the previous piece, "Lines"' effect was based on repetition and minimal variation, which will have resonated with fans of pioneering minimalists La Monte Young, Terry Reily, Steve Reich and Philip Glass.

Zimpel remains a restless sonic adventurer and one of the most distinctive voices on the Polish jazz/improvised music scene. This solo project felt like the start of an epic journey, whose main adventures, perhaps, lie ahead.

Formed in 2012, the Aga Derlak Trio has won multiple awards in its short career to date, but perhaps most notably the Polish Phonographic Academy's Best Jazz Debut Award for First Thought (Hevhetia, 2015). Derlak has earned glowing praise from legendary Polish saxophonist Zbigniew Namyslowski and this showcase, which presented Derlak's original compositions from her as yet to be released follow up, gave plenty of evidence of her talents.

Beginning with the dynamic "Suspension" the trio set out its stall with Derlak blurring the lines between the composed and the improvised, her accelerating melodic contours supported by the fulcrum of double bassist Tymon Trabczynski and the brisk industry of drummer Bartosz Szablowski. The heart of the perofrmance featured an uninterrupted three-song suite of sorts, beginning with the spacious ballad "The Word," where a sotto voce bass ostinato and pattering mallets underpinned Derlak's gradually unfurling solo; greater impetus colored "Recovery," with the patient tapestry of Derlak's expansive soloing punctuated by striking percussive accents and oscillating tempos; the adrenaline-charged "Repetitive Dream" saw the trio at its most cohesive, exhibiting a fiery chemistry and a sense of drama that should take this trio far.

Poland has a long history of free jazz/improvised music but the current scene, as witnessed in Jazztopad's Concerts in Living Rooms series, is particularly fertile. This quartet, consisting of brothers Maurycy Wojcinski (trumpet), Szymon Wojcinski (piano) and Ksawery Wojcinski (double bass), and drummer Krzystof Szmanda drew from the free tradition, but with a sense of control and nuance more akin to chamber music.

Bowed bass, mallet-coaxed cymbals, damped piano strings and dark-hued trumpet lamentation announced the opening number, which moved patiently, seamlessly, from brooding atmospherics to feisty collective fire. Strongly sculpted trumpet lines moved against rumbling bass—Ksawery dancing with his instrument—percussive piano accents of stabbing precision and Szmanda's cajoling attack. The direction, however, was never predictable, with a pocket of lyricism steered by trumpet then piano arriving like a gradual parting of the storm clouds. The lull proved temporary, with drums and bass conspiring to reignite the quartet's flames, which burned brightly before dimming and eventually dying without ceremony—drama without the theatrics.

The immediate dynamism of the second number, which sprang from an infectious drum intro of carnival-esque fervour, grabbed the attention and set the dial for the high tempo and collective intensity that followed, with trumpet and piano negotiating the propulsive rhythms with a passion not quite bordering on abandon. This duality of free flight amid underlying structure, the sense of individual adventure and collective responsibility, created a tension that was at the core of a fine performance.

Over the last decade alto saxophonist Maciej Obara has carved out a reputation as one of the leading figures of Polish jazz, with half a dozen releases as leader to his name.

Obara is slowly but surely becoming known to an international audience through his collaboration on Tomasz Stanko's Balladyna project, his participation in the Serious/EFG London Jazz Festival-promoted Take 5: Europe, an appearance at 12 Points 2012, his Polish/Norwegian quartet Obara International—documented on Live at Manggha (For Tune, 2014)—and not least, through his ongoing association with Jazztopad. In the past few years, in a bid to more widely promote its name and that of Polish jazz , Jazztopad has toured Polish showcases abroad, with Obara leading his quintet in Japan, Turkey, North America and Mexico.

For the EJC showcases, Obara was flanked by double bassist Max Mucha, drummer Max Andrzejewski and pianist Dominik Wania, the latter a former colleague in Stanko's band. Obara led the quintet through a set marked by melodious charts and lyrical improvisation that bobbed back and forth between passages that were energetic and seductively introspective in turn.

The opening number served notice of Obara's strong, direct writing approach, with the quartet locked in tightly woven interplay of emotive import from the off. Wania's unaccompanied solo formed an extended bridge between the collective lyricism of before and the burning, saxophone—led charge that followed. Likewise, Mucha's solo spot provided a sonic tangent whilst maintaining the propulsive continuity. The quartet's eventual regrouping ushered in a ruminative exploration, with Obara and then Wania casting a quieting spell, underpinned by a flickering bass pulse and spare percussive accents.

Stark the contrast between group introspection and freewheeling adventure—both explored courageously at some length—though at either extreme, Obara and his excellent quartet's choreography was compelling. A wonderful musician, Obara will soon reach the wider audience his talents undoubtedly merit with his forthcoming debut (roughly scheduled for the first half of 2017) on the ECM label.

Male vocalists in jazz, particularly those ploughing their own furrows, are not numerous. Gregorz Karnas is one notable exception. With half a dozen albums under his belt on reputable labels such as Slovakia's Hevhetia and Hungary's BCM, the award-winning vocalist is a true original. That his website is available in seven langauges, including Mandarin Chinese, is perhaps revealing, for as this showcase performance revealed, his invented musical language transcends conventional notions of musical vocabulary and grammar as grounded in a given culture; Karnas' uniqueness is what makes him universally accessible.

Karnas' opening salvo of wordless vocalization was, curiously, as rooted in jazz improvisation as it was outside the jazz vocal tradition. Karnas' vocal innovation—strings of long vowel sounds crowned by falsetto high notes, punctuated by punchy nonsense scat—contrasted strikingly with pianist Elchin Shirnov, double bassist Mariusz Prasniewicz and drummer Sebastian Frankiewicz's driving accompaniment, one rooted in post-bop terrain. Karnas was arresting at both slow and faster tempi, his wholly personal improvisations—interspersed with quirky, English-spoken tales—being consistently defined by their melodic coherence. Though plenty of improvising vocalists channel instruments in their vocalisations, few do so in such an uninhibited way, and for such extended periods, as Karnas.

A four-minute drum solo, which graduated from whispering accents to stormy release, served as a dynamic diversion, allowing both Karnas and audience a sonic rest, of sorts, before the quartet reunited, energized by Shirinov's feisty soloing. Karnas hitched a ride for the finale, as the quartet burned fiercely, ending on an explosive note.

Karnas' original idiom, dramatically portrayed against a familiar rhythmic canvas, made for an arresting listening experience.

Whilst it's possible to find modern day exponents of just about every form of jazz from throughout its century-long history, it's quite rare to encounter an artists who breathes new life into decades-old styles. Multi-faceted pianist/composer Marcin Masecki is one such artist. Over the course of his forty five-minute set, superbly accompanied by drummer Jerzy Rogiewicz, Masecki shot a bolt of electricity into the EJC audience with an exhilarating exhibition of ragtime piano that provoked cheers and slack-jawed admiration in equal measure.

Masecki's initial inspiration came, oddly perhaps, when as a child he witnessed a stride pianist at Disneyland, California in the Wild West saloon who cast a hypnotic spell on the young Pole. Fast forward a couple of decades to the EJC 2016, where the spirits of Scott Joplin, Eubie Blake and especially James P. Johnson were alive and kicking in Masecki's wonderfully spirited performance.

Masecki's masterful delivery, on an old honky tonk piano, was mirrored at every step by Rogiewicz, whose rhythmic panache and incisive percussive accents contributed much to the music's power. Breathless virtuosity rubbed shoulders with slow-spun, rhythmically bobbing tunes of irresistible charm. Yet, even on numbers that started sedately, an almost inevitable gravitational pull exerted itself, pushing pianist and drummer into dizzyingly speedy dialog.

Occasionally, hints of Masecki's classical training peeked through, and in his roughly chiselled, single-note improvisations, a little of Thelonious Monk's artistry—the boundaries of ragtime, like jazz, are flexible. A couple of times Masecki tweaked a knob on a small electronic device on top of the piano, producing a tiny car-horn squeak, though for what effect or purpose was not clear. No matter, for the duo's joyous delivery, on tunes that oscillated pace-wise between gentle stroll and Keystone Cops caper was never less than enthralling. "Steeplechase Rag"—the tune that began Masecki's fascination with the style—and a Polish-penned number called "New York Baby" rounded out the set with a flourish.