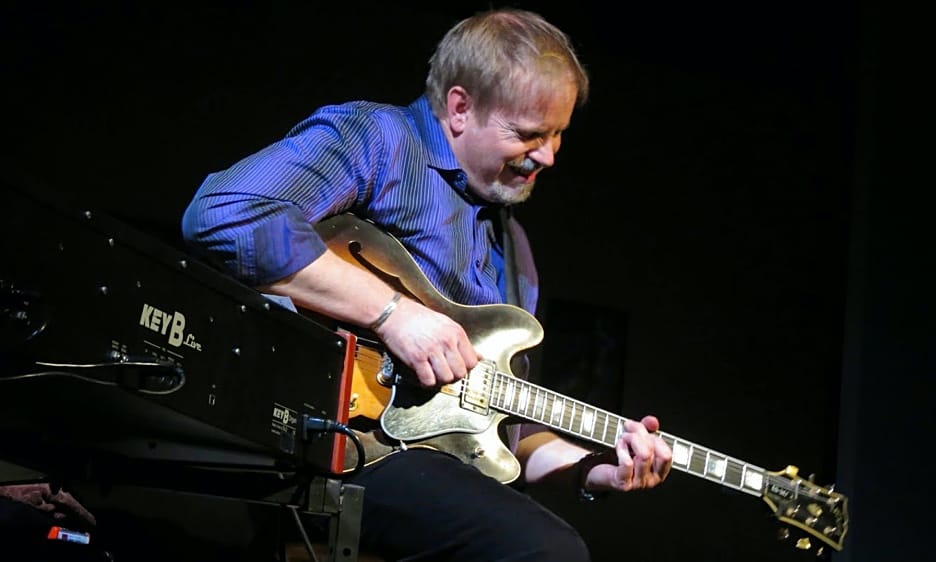 By MARK SULLIVAN
February 10, 2020
Sign in to view read count
Guitarist Dave Stryker grew up in Omaha, Nebraska and moved to New York City in 1980. His big break came when he joined organist Jack McDuff's group for two years, from 1984-85. It was through McDuff that Stryker met tenor saxophonist Stanley Turrentine, who would occasionally sit in. After leaving McDuff, Turrentine asked Stryker to join his quintet (1986-1995, then again at the end of Turrentine's life). Stryker began recording his own albums in 1988, and has also had a long association with saxophonist Steve Slagle, first recording with him as The Stryker/Slagle Band in 2005. The previous All About Jazz interview Dave Stryker: Soulful Sound covers his early career in detail.

Stryker has recently made a series of albums with the title "Eight Track." Younger readers may need an explanation of the eight-track format, which is now regarded as an obsolete technology. The format employed a loop of magnetic tape mounted inside a cartridge, eliminating the tape handling and reels used in reel-to-reel tape recordings. Introduced in 1965 for use in cars, it began to fade in popularity in the late 1970s, and was replaced by the compact cassette, which had been introduced in 1963, but did not become popular for music recordings until the addition of noise reduction technology in 1971.

This interview was conducted in advance of performances at Middle C Jazz in Charlotte, NC.

AAJ: In the last few years you have returned to the organ format in a big way. Was there a particular group you were modeling for the Eight Track albums? How did you choose the songs to cover?

Dave Stryker: Some of my first jazz gigs in Omaha were with an organist named John Miller. When I moved to NYC in 1980 I got the gig with Jack McDuff. Two years later I worked with Stanley Turrentine for over 10 years. In all of these groups it was common to take occasional pop tunes and put a jazz spin on them. Stanley did a whole record of Stevie Wonder's music while I was in the band.

So the idea of playing pop tunes in a jazz setting was always part of the music for me. I got the idea for Eight Track from seeing the positive connection with the audience when I would throw in a Carpenters tune or something and I would joke on the mic: "That's from my next record Dave Stryker Plays the Hits of the Eight Track. People would laugh, but then some started coming up to me and saying "hey when is that Eight Track record coming out I want to get that" ...well, a light bulb went off and that's how it came about.

Since the classic organ trio sound is with tenor I thought it would sound good to play with vibes instead. I was a fan of Grant Green's record Street of Dreams (Blue Note Records, 1967) with Bobby Hutcherson, Larry Young and Elvin Jones so I called Stefon Harris and my regular trio of Jared Gold and McClenty Hunter.

AAJ: How did you choose the Eight Track cover songs? Were there many that were tried and rejected, either by you or the band when you first played them?

DS: For each album I made a list of songs from the '70's (the eight-track era) that I liked. Then I had to narrow them down to songs that I felt I could put my stamp on and that would be good vehicles for improvisation.

AAJ: You have been producing your own albums, in addition to recent ones by Jared Gold and McClenty Hunter (as well as playing on them). Is producing different when someone else is the leader on the date?

DS: I try and help whoever I'm producing to be able to play their best without having to worry about all the logistics. Jared and Mac are in my band so that was something I wanted to do to help them get their music out there.

AAJ: What inspired you to take up jazz guitar, and who have been your main inspirations?

DS: When I started, I was into rock (Cream, Hendrix) and blues. In high school I went to a jam session at the Union and they were playing [pianist Horace Silver's] "Song For My Father." One of the guys told me I shouldn't be playing those rock licks (haha) so I went to the record store and asked where the Jazz section was. I walked out with a Coltrane and a George Benson and got hooked. Wes, Grant Green, Pat Martino, George Benson, Kenny Burrell, Jim Hall, later Pat Metheny and Scofield. Plus all the greats: Miles, Sonny Rollins, Coltrane, McCoy, Herbie... I loved them all.

AAJ: For the guitarists: please describe your current guitar, amp and effects setup. How has it changed over the years?

DS: I've played a Gibson ES 347 for many years. I also play Benedettos now as well. I use a Fuchs Jazz Classic live and a Fender Blues DeVille 4x10 in the studio. I also collect Polytones [compact solid state guitar amplifiers which were favored by jazz guitarists, but are no longer manufactured] and have lots of guitars.

AAJ: Do you use any electronic effects (now or in the past), or have you always stuck to just the guitar and an amp?

DS: I mostly run directly into the amp. Sometimes I'll use a delay/reverb pedal. On some projects I've used effects if the music called for it but usually not on my records. I feel getting a good tone and sound without effects is longer lasting.

AAJ: When asked to share his thoughts after the recent passing of guitarist Vic Juris, he provided this edited version of his remarks at Vic's funeral:

DS: Well you would hope when you move out to New Jersey that you would be the best guitarist on your block....haha I was lucky to have Vic Juris as a friend for the last 25 years.

When he and his wife Kate were looking to buy a house I told him about the one across the street from us...and there you go.

The late great John Abercrombie said it best: "Vic is the best, there are none better." Vic was New Jersey. But Vic also was the world. All of us knew that this was one of the greatest to ever pick up a guitar. There is not one guitarist alive who doesn't give it up to Vic Juris. Those of us that play music know the time and dedication it takes to reach that level of artistry. Vic put in the hard work but also had that special magic...

I feel very fortunate to have been able to spend the last 6 months being a friend to Vic and doing what any friend would do. Mainly just hang out and talk a little and play a few tunes.

Because of all of the great recordings Vic made and his incredible performances we were lucky to hear over the years, his music will live on. But especially through the hundreds of students he taught over the years at his house and in college. Several of them also stepped up when Vic got sick, by coming over to play and hang. That is where his legacy will live on from having passed his knowledge on so freely.

Vic really got to feel the love from everyone the last 6 months. When all the incredible donations started pouring in from the Go Fund Me campaign, he was truly touched. Also making the readers poll in Downbeat this year for the first time and by getting some overdue recognition really lifted his spirits.

We will all miss Vic, but his music lives on.