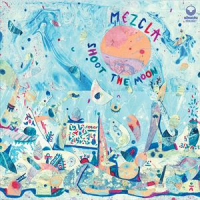 It is not only in London that UK jazz is being revitalised by turbulent young rebels. London is certainly the most exciting centre, with black and women musicians gaining unprecedented visibility, bringing particular sensibilities with them. But other cities, notably Birmingham and Manchester, have developed vibrant new scenes, too.

Viewed from down south, Glasgow seems to lag behind, although that may be because news takes a while to cross the border. Whatever the reason, 2017 BBC Young Scottish Jazz Musician of the Year David Bowden's Mezcla septet is good news. Shoot The Moon, the band's debut album, is a get-on-the-good-foot, Saturday-night romp with an enthusiastic embrace of African, Latin American and funk musics. It delivers a good portion of the heat, though less of the invention, of trumpeter Colin Steele's feral Stramash (Gadgemo, 2009), which eleven years on is still perhaps the high water mark of new(ish) Scottish jazz.

Mezcla will be fun to see live and summer festivals will be an ideal platform. By the end of its one-hour playing time, however, Shoot The Moon's relentless party vibe is beginning to outstay its welcome and you may feel a need to get the Hoover out. It is not until the penultimate track, the relatively reflective trumpet feature "Firefly," that we get something that does not run away with itself. The saxophone showcase "Winter Walk" and highlife and township jazz derived "Akpe," which immediately precede it, start out promisingly but both soon return to familiar territory. Next time out, Bowden might try moving the scenery around a bit. Meanwhile, club and festival audiences will care not a jot for such nit picking.