By Mark Corroto
February 10, 2020
Sign in to view read count 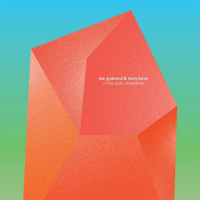 Homeostasis is defined as a steady state of internal conditions, i.e. your comfort zone. A body prefers to maintain a temperature of 98.6 Celsius and a pH reading of 7. But homeostasis also describes a resistance to change. That is why we heat our houses in winter and cool them in summer, to live within our comfort zone. What if moving out of this territory was good, no, actually great for you? Science and physiology studies postulate the benefits of strenuous exercise or cold exposure as keys to improving metabolic fitness. Into The Arctic Dreamtime by guitarists Ivar Grydeland and Henry Kaiser is the aural accompaniment to that trip outside of homeostasis.

The music is the score to Roald Amundsen's 1925 silent documentary film Ellsworths Flyveekspedition 1925. Not only is the music stark and austere, but it might cool your listening space by several degrees. Kaiser, who has made several trips to Antartica to film underwater and record music, has the bona fides for this documentary about an expedition to the North Pole. His photography and music were utilized in Werner Herzog's 2007 Antarctic documentary Encounters at the End of the World.

Kaiser collaborated with Norwegian guitarist Ivar Grydeland (No Spaghetti Edition, Ballrog, Hunstville) in the studio to create this one-take improvised soundtrack. The film (available on the internet) clocks in at 80 minutes, but for this release the duo edited the music to five tracks and 65 minutes. Two guitars simulate the unsympathetic and hypothermia-inducing conditions the explorers faced in 1925. In the cold, time slows just as water freezes. To city dwellers living in homeostasis, ice is static. But the sounds are glacial and very much alive. What is required to observe this secret life of ice is the austere conditions of the polar regions. Kaiser and Grydeland animate the babble and tumult of the cold. The noise is elegant and elongated or simply picked against reverberations. Your ears, like the explorers, are traveling on another planet. One that just happens to be at the top of our world.

Roald Amundsen 1925; Spitsbergen; To The North Pole; N25; Into the Arctic Dreamtime.