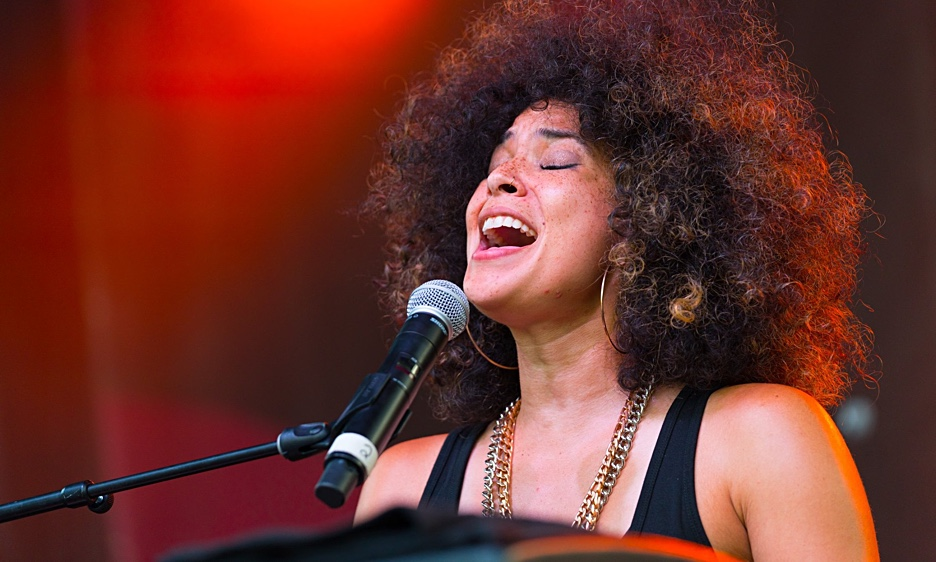 Last year the festival operated under the threat of rain all weekend. This year's 42nd edition saw record-tying high temperatures: 93 and 94 degrees Fahrenheit (ten degrees above the historical averages). No doubt it is a coincidence that the programming was cooler than last year's: lots of contemporary/smooth jazz and pop, and very little progressive jazz or Latin. Not that this had any apparent effect on the size (or enthusiasm) of the audiences. It should also be noted that several of the acts have current or past associations with Blue Note Records, giving the festival a bit of contemporary Blue Note flavor overall.

Israel-born tenor saxophonist/composer (now a New York City resident) Ofer Assaf played contemporary jazz with a heavy rock tinge. And he brought a crack band: rock/fusion guitarist Alex Skolnick; fusion/Latin jazz electric bassist Lincoln Goines; and Latin drummer Robby Ameen. The leader and Skolnick were a dynamic duo all the way through, frequently doubling the heads as well as playing high-energy solos. "Burning Desire" gave Goines an opportunity to demonstrate his soloing gifts. The single "Altruism" (Assaf recommended checking out the YouTube video, which also features Skolnick's guitar) was a kind of power ballad, with soaring saxophone and guitar lines. There was also space for a very controlled drum solo from Ameen, accompanied by a repeated riff from the rest of the band. The set ended with a rousing funk tune.

Vibraphonist Joel Ross and his Good Vibes band presented what turned out to be the most modern jazz of the festival. The sound and instrumentation matched his album KingMaker (Blue Note Records, 2019): a quintet with vibes, alto saxophone, piano, double bass and drums. The first tune featured a lovely unaccompanied piano interlude from Jeremy Corren, and blazing traditional double-mallet technique from the leader. Ross favors a very percussive attack, which was emphasized by a broken mallet head that went flying into the audience. The second piece began with an unaccompanied drum solo from Ofri Nehemya, which was joined by the vibes, before featuring trading between alto saxophonist Immanuel Wilkins and the leader.

The third selection began with an unaccompanied vibes introduction, leading into a lyrical alto saxophone theme. The anthemic chord progression inspired a lyrical sax solo, followed by a very contrasting vibes solo, much more rhythmic and harmonically "out." At this point there was definitely dueling vibes, as bleed-through from the Meadow Stage carried vibraphonist Stefon Harris and his band into the space. The fourth tune in the set again began with unaccompanied vibes, playing a rhythmic, etude-like passage, followed by another lyrical (but complex) head. This is a band with a clearly defined identity, as well as a cooperative, mutually supportive playing style. It also boasted Kanoa Mendenhall on double bass, the sole woman bassist at the festival.

Vibraphonist/marimba player Stefon Harris and his Blackout band's set overlapped with Ross, and no doubt the bleed-through was not their fault. Their current album Sonic Creed (Motema Music, 2018) is a tribute to jazz heritage from the iconic Blue Note years, but with their own twist. "Dat Dere" is a tune by pianist Bobby Timmons made famous by Art Blakey's Jazz Messengers. An original evoked a family barbecue atmosphere, while another original presented soul jazz with vocals—Harris' approach encompasses both hard bop and contemporary black pop. Pianist/composer Horace Silver's "The Cape Verdean Blues" featured a mallet solo that transitioned from vibes to marimba, ending with a dramatic repeated rhythmic riff. Other tributes included saxophonist/composer Wayne Shorter and fellow vibraphonist Bobby Hutcherson. Keyboardist/vocalist Marc Cary took the final vocal, with help from bassist Luques Curtis, drummer Terreon Gully, and saxophonist/vocodorist Casey Benjamin. Several of Harris' previous albums were recorded for Blue Note Records, and his sound with Blackout fits in with the blend of bebop-based jazz and contemporary influences (such as hip-hop) common to many of the label's recent releases.

Saxophonist/composer Marcus Strickland plays acoustic instruments, but his band Twi-Life has a very electric sound, with electric bass and synthesizer sound effects. Their set drew from both of his Blue Note Records albums: Nihil Novi (2016) and People Of The Sun (2018). Music from the debut included "Tic Toc" and "Sissoko's Voyage," which was built around a sampled African griot's performance. People Of The Sun was represented by "Lullaby," and "Timing," which featured an anthemic head (with a spooky synthesizer riff), and an organ solo punctuated by call and response with an echoed synthesizer. "Black Love" was inspired by Strickland's parents, and the album included recorded interviews with family members. Strickland joked that the audience would have to buy the album to hear those. But the tune was like a soul ballad, with Strickland switching to bass clarinet. Vocalist Christie Dashiell and Queens rapper Pharoahe Monch were promised for later in the set, but another show overlapped. The previous act on the Meadow Stage was vocalist Rhonda Ross and pianist Rodney Kendrick. Ross was still signing autographs and taking pictures with fans over a half hour after their set: a real trouper.

Bassist/vocalist/composer Richard Bona is from Cameroon, but he has lived in France and is now based in New York City. Past associations include the Pat Metheny, keyboardist/composer Joe Zawinul (of Weather Report), and fusion guitarist Mike Stern, as well as a string of solo albums. So his performance could have included fusion, funk, and his own original African-based songs. But his most recent album Heritage (Qwest Records, 2016) focused on Cuban and Afro-Cuban music, and this was the project he brought to the festival stage. He actually had three Cuban musicians in the band (trumpet, congas, and drums), along with a Mexican trombonist: but Venezuelan pianist Osmany Paredes was especially impressive. Bona was a groove machine, with a gigantic bass sound (at one point I felt as if I was being punched in the chest). But what is most notable is his discipline. His solos demonstrated massive chops—speed, facility with harmonics, popping and slapping technique—but during the song he held all of that in reserve.

And his singing is not an afterthought: his sweet vocal on an original ballad was a high point of the set. As was his sense of humor: at the end of that ballad he mimicked swatting a mosquito during a held high note. The trumpeter switched to claves for a montuno, with the vocal doubled by trombone. Bona began the next tune in falsetto, accompanied by percussion, and he soon engaged the audience in an enthusiastic vocal call and response. He later led another audience sing-along, more elaborate this time. For the encore he commanded "everybody dance!" He may not have gotten full compliance, but the feeling was certainly there.

Nashville guitarist/composer Slim Gambill has a high-profile main gig, as guitarist with the backing band for the hit country trio Lady Antebellum. He titled his solo album Fake Jazz & Theme Songs (Ludlow St. Records, 2019), but there was plenty of real jazz on offer. The opening tune featured a head in octaves (Wes Montgomery or George Benson style), which morphed into an over-driven rock guitar solo—Gambill is a killer guitarist in both styles. The second tune had a fast bebop head, with walking bass. The band was introduced as first-call Nashville players, and they certainly demonstrated that: this piece included bebop piano & guitar solos, followed by solos from drums and electric bass. "54321" included a quote from Jimi Hendrix's "The Wind Cries Mary," then moved on to big guitar and organ solos.

Gambill thanked the audience, noting that "I'm usually in a country band, so thanks." He introduced a tune titled "Meet The Family," saying that it was a working title ("for no particular reason") which stuck, because "I'm bad at titles." They then performed a "name that tune" mashup, which turned out to be legendary jazz guitarist Wes Montgomery's "Four On Six" combined with Stevie Wonder's "I Wish" from Songs In The Key Of Life (Tamla, 1976). "Lyla Marie" is titled for his young daughter. But "it's not a sensitive ballad, because she's a firecracker: she's a little rocker." Dynamic vocalist Candice Devine joined the band for "Over Getting Over You" and "Treat Me Like A Lady." The set ended with the instrumental "Last Time Thing" (which opened the album, but also worked very well as a closer).

Freelance is a seven-piece "New Soul" band from Harlem (New York) with talent and energy to burn, individually and collectively. Although it must be said that the group name is truly ill-chosen: try Googling it and see what happens. Their set drew heavily from their debut album Yes Today (Revive Music, 2018), beginning with the single "Band Plays On." Lead vocalist Tim "Smithsoneon" Smith brought a sweet falsetto sound to "Why Wait," a song mashing up rapper J Dilla and jazz keyboardist/vocalist Patrice Rushen. Powerful drum solo over a vamp from drummer Justin Tyson on this one, too. After the original ballad "Hope" the band launched into a couple of inspired covers: Bell Biv DeVoe's "Poison," followed by Earth, Wind & Fire's "Shining Star." They were joined by a guest djembe drummer for the final tune, bringing the set to an exciting, rhythmic conclusion.

Vocalist/pianist Kandace Springs has a way with a pop song, a jazz/pop hybrid approach not unlike fellow Blue Note Records label- mate Norah Jones. Her set emphasized creative pop covers—including some from her album Indigo (Blue Note Records, 2018)—and jazz standards. She opened the set with "People Make The World Go 'Round," a hit for The Stylistics in 1971. Her vocals recalled Dionne Warwick, and her Fender Rhodes electric piano was accompanied by bassist Chris Gaskell and drummer Connor Parks, her core trio. She switched to the Steinway grand piano for "The Gentle Rain," the bossa nova composition by Luiz Bonfa. She even played a piano solo, a sign of the more active pianism displayed throughout the set. While her recordings do include her piano playing, it is generally sublimated to her vocals—here the two aspects of her musicianship were more equal. For further emphasis, she next played and sang Duke Ellington's "(In My) Solitude" without the rhythm section.

At this point she called pianist Latavius Mulzac and backup vocalist Theo Griffiths onstage, swelling the group to a quintet for Sade's "Love Is Stronger Than Pride." The expanded band also played "Killing Me Softly With His Song" (strongly associated with singer Roberta Flack, although she did not originate it). Declaring herself a huge Roberta Flack fan, Springs later sang "The First Time." War's 1972 hit "The World Is A Ghetto" included space for both bass and drum solos (Gaskell played several outstanding solos during the set). A version of the standard "What Are You Doing The Rest Of Your Life?" provided a preview of Springs' forthcoming album (which also includes a duet with Norah Jones). Last but not least, Springs declared herself a Nina Simone fan, and proved it with a version of "I Put A Spell On You," accompanied only by her piano, and featuring a medley of classical piano works as an introduction. An impressive ending to a set full of charm.