Alex Skolnick, born in 1968, grew up in Berkeley, California. At age nine, a fascination with the rock group Kiss led to a desire to learn guitar. At age sixteen, Alex tried out for a local band called Legacy. Shortly after graduating from high school, he found himself recording his first album with the group, who by this time had changed their name to Testament. What followed were five albums and countless tours with, among others, Megadeth, Slayer, Judas Priest, and White Zombie. Alex received critical acclaim for his lead guitar work, which had been inspired by heroes such as Eddie Van Halen and Randy Rhoads, ranking high in many guitar magazine polls, often as 'Best Thrash Guitarist' and 'Most Underrated Guitarist.' In addition to his metal accomplishments, Alex has made a mark that no one would have predicted: as a jazz guitarist 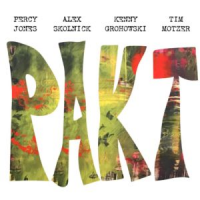 Recent internal polling serves to prove that most actively conscious homo sapiens are seriously seeking out a few more hours of headspace a day. With that comes the need to fill it with anything but blinks, tweets, notifications or the incessant slate of current events. And with that comes a soundtrack: equal measures invention, noise, humor, ...

More from PAKT plus Adam Holzman and John McLaughlin

On today's program we feature more music from PAKT, Percy Jones, Alex Skolnick, Tim Motzer, Kenny Grohowski from their album recorded in August 2020 and the more recentPAKT Live in Pawling. Also John McLaughlin and Liberation Time, Adam Holzman fromThe Last Gig. The new one from Band Of Other Brothers and Australian progressive music from The ...

New and recent music from Alex Skolnick, The Mad Lab, Nicklas Brannstrom and The Fat Suit. Plus, more from Adam Holzman with The Last Gig and guitarist Samo Salamon from his album Almost Alone Vol 1.Playlist Alex Skolnick “Conundrum" from Conundrum (Palmetto) 00:00 The Mad Lab “The Maze in the Mind" from Design of ...