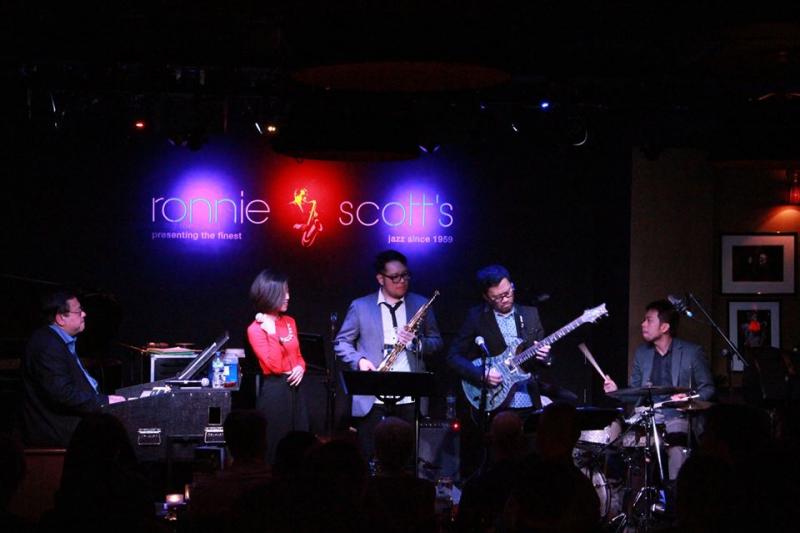 One of the most pleasing aspects of the EFG London Jazz Festival is its reach into the many jazz clubs dotted around the capital. Whilst the concert halls host the big names and draw the tourists it's smaller venues like Pizza Express, The Bull's Head, Café OTO, the Polish Jazz Café, the Vortex and the 606 Club that champion jazz night after night all year round. Top dog in this department, without a doubt, is Ronnie Scott's, where the Asian Jazz All-Stars Power Quartet serenaded a full house into the wee hours.

This was the AJASPQ's second time at the EFG London Jazz Festival following its appearance at Pizza Express in 2012 -part of its Asian/European tour. It was a slightly different AJASPQ from the 2012 version that took to the stage just before midnight. With tenor saxophonist Tots Tolentino unable to travel from the Philippines for personal reasons the slot was ably filled by Malaysian soprano saxophonist Julien Chan. Given that this was his first gig with the band it was perhaps understandable that the band eschewed the near twenty-minute workouts "Make It So," "Offside" and "Tiramisu" for a set weighted in favor of the standards.

The AJASPQ takes as its inspiration the longstanding trio of Larry Goldings, Peter Bernstein and Bill Stewart and much of the evening's music fitted that groove. It was with Jimmy Cobb's swinging "Say Little Mama, Say" that the quartet launched the set. Chan and guitarist Eugene Pao delivered the melody in unison before Chan, Jeremy Monteiro on organ and Pao all stretched out. Larry Goldings' breezy "The Grinning Song" followed a similar blueprint. Chan, showing no signs of first-night nerves led the front-line with a soulful break, with Monteiro and Pao's bluesy solos providing contrasting textures.

The quartet was joined by Singaporean singer Melissa Tham on "Falling in Love Again" Originally a Monteiro instrumental, Tham's lyrics brought life to a melody that had the timeless feel of a jazz standard of yore. Tham's pure, lilting tone shared something of the seductive quality of Julie London and her scatting skipped with a light, playful rhythm. Tham's evocative lyrics transformed the sultry "Seul a Paris" -another Monteiro original that had started life as an instrumental. Pao, Monteiro and Chan each played emotive solos but it was Tham's wistful delivery that lingered in the memory.

"Swing with Me"—written by Monteiro and fellow Singaporean Rani Singam—showcased Tham's personalized scatting before the increasingly assured Chan, followed by Pao, cut loose with melodic solos. Tham left the stage to be replaced by the great Alan Barnes. The English saxophonist quipped that he's in the "Who's He of Jazz" but this thirty-year veteran of the British jazz scene has collaborated with Humphrey Lyttleton, Don Weller, Stan Tracey, Martin Taylor, Scott Hamilton and David Newton, as well as gracing recordings by Björk, Bryan Ferry and Van Morrison. He illuminates every session he plays on and tonight was no different.

Barnes brought his trademark fluidity and elegance to the melodious Monteiro/Pao tune "Monk in the Mountain, from Jazz-Blues Brothers (Verve, 2014), a rousing group workout with plenty of sweat-breaking improvisation.

In 2013, to mark the twenty first edition of the EFG London Jazz Festival twenty one artists were commissioned to write new work. A great idea looks set to become a LJF tradition and this year Monteiro was in the illustrious company of Guy Barker, Jean Toussaint, John Surman, The Bad Plus, Trish Clowes, Laura McDonald and Regina Carter as one of those called upon to pen new material. With Monteiro switching to piano the group was joined by Scottish double bassist Callum Gourlay on the pianist's freshly minted "Lion City"—a swinging, solos-charged number carrying Monteiro's melodious stamp. Drummer Hong Chanutr Techatananan—who kept exemplary time throughout the evening—featured briefly towards the end.

Following the intermission Monteiro's "Samba Apaxionado" began the second set, with Barnes taking a sing-song clarinet solo. Tham returned for a swinging version of Richard Rogers/Lorenz Hart "My Romance," her delicious scat paving the way for one of Monteiro's best solos of the evening. Saxophonist Alex Han—straight from a gig with Marcus Miller's band—dovetailed nicely with Barnes on "Softly as in a Morning Sunrise and effectively kick-started a jam session. Han's band mates, drummer Louis Cato, trumpeter Lee Hogans and pianist Brett Williams stepped up and roared through Nat Adderley's classic "Work Song."

A mid-tempo swing interpretation of Isham Jones/Marty Symes' "There is no Greater Love"—with Tham again on vocal duties—rounded off another memorable evening at Ronnie Scott's—home of jazz legends and of those in the making.