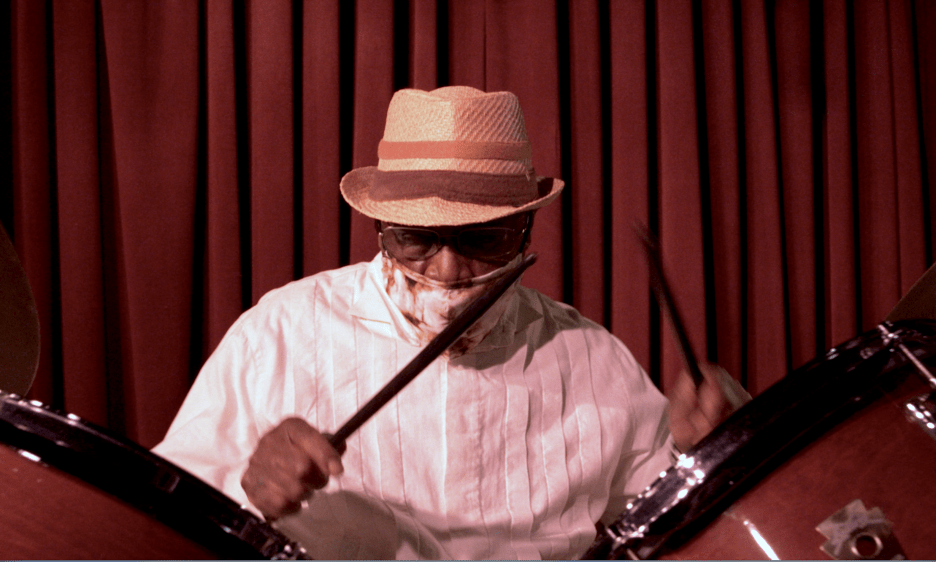 Drummer/composer/bandleader Andrew Cyrille opened this livestream from the venerable Village Vanguard jazz club speaking about the oddness of playing to an empty room, noting the absence of applause at the end of numbers. Or booing: "I've been booed, too" he noted ruefully. But ultimately it's about the music. "Even when we rehearse we play hard. We play life."

Cyrille was joined by guitarist Bill Frisell, pianist David Virelles and double bassist Ben Street. The absence of an audience did have one positive effect, allowing the group to set up in a circle. The nearly 90 minute set covered a range of Cyrille's recordings and projects. They opened with Frisell's "Worried Woman" from Cryille's recent album Lebroba (ECM Records, 2018), an Americana tune which recalls the traditional song "Black Is The Color (of My True Love's Hair)." After a rubato beginning with Frisell playing the head, Virelles' piano solo went into angular, Thelonious Monk-like territory. Frisell's solo continued in an abstract fashion, employing some looping. The album version's instrumentation was sparser: Cyrille and Frisell plus trumpeter Wadada Leo Smith. This quartet is closer to the personnel on Cryille's earlier The Declaration Of Musical Independence (ECM Records, 2016), with Virelles in place of synthesist/pianist Richard Teitelbaum. Surprising that none of the evening's repertoire was drawn from it.

"Under Surveillance" by pianist Curtis Clark was introduced to Cyrille by Trio 3 (his trio with saxophonist Oliver Lake and double bassist Reggie Workman). Its sprightly, up tempo hard bop head was a great contrast to the opener. These players all have considerable avant-garde/experimental credentials, but they sounded great just playing swinging jazz, too. Cyrille's "Pretty Beauty" came next, also from Lebroba. Another nice contrast, a rubato ballad with arco bass from Street. Cyrille's "Special People" was originally on his quartet album Special People (Soul Note, 1980). After a sing-song Monk-like theme it sounded very free.

Virelles' "Mañongo Pabio" was recorded on his album Continuum (Pi Recordings, 2012), with a band including him, Street and Cyrille. Its rubato, ritual sound was colored by his keyboards and laptop electronics and arco bass. Frisell's "Drink" (which Cyrille acknowledged as something that would have been standard procedure at a jazz club like the Vanguard) is from Frisell's album Disfarmer (Nonesuch Records, 2009). A rubato Americana tune, it was contemplative until disrupted by Virelles' wild outside flourishes during his piano solo. It was reminiscent of Cecil Taylor, one of Cyrille's longest associations.

Cyrille acknowledged his wife Cindy Robinson Cyrille's birthday before introducing "Energy Cycles" by drummer Milford Graves. It came from Pieces Of Time (Soul Note, 1984), a percussion ensemble with Graves, Cyrille, Kenny Clarke (who Cyrille acknowledged as the premier bebop drummer) and Famoudou Don Moye. He played an excerpt of the original, with the occasional percussion accompaniment of Street's claves and Virelles' shaker. The drumming was punctuated by the chant "Milford Graves." Ben Street's "Berlitz" was the last group original, a pattern oriented piece using the whole band as rhythm section. The show closed with a Thelonious Monk medley of "Mysterioso/Rhythm-A-Ning." The band again played Monk straight, with Verelles really channeling the great composer/pianist. The performance featured drums and bass trading fours in call-and-response. Cyrille back-announced the titles, while also introducing Monk to anyone in the audience who were unfamiliar. It seems unlikely that any livestream subscribers to this show would be unfamiliar with Monk's music, but it was still a splendid ending to the show. Nice to hear such a varied song list, with representation of Cyrille's musical history, contributions from all of the band members, and nods to the jazz tradition.