By FRIEDRICH KUNZMANN
August 25, 2020
Sign in to view read count 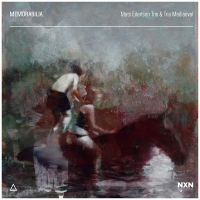 Talk of an album sounding highly reminiscent of something that could be released on Manfred Eicher's ECM label is quite common. But it does not come as a surprise anymore that much of today's music shares similar melancholic and minimalist contemporary leanings with the aesthetic found on the pioneering Munich-based label. However, this debut date, led between bassist Mats Eilertsen, his trio and Trio Mediaeval, screams ECM. Not only have both Eilertsen and the vocal trio recorded extensively with ECM, but the special fusion of seemingly liturgical music blending with modern jazz sensibilities on Memorabilia would fit in to the ECM canon perfectly, alongside other experimental classical releases such as Maria Pia De Vito's modern take on 18th century composer Giovanni Battista Pergolese's oeuvre, featuring the likes of Anja Lechner.

The liturgical association is quite obvious. Between instrumental interludes and more song-oriented exercises, prayers ("Kyrie," "Sanctus," "Agnus Dei"), as typically featured within Christian masses, tie the stream of pieces together in a ritualistic way and lend the music its contemplative allure. Not that the reflective and patient interplay between Eilertsen and his trio-mates Harmen Fraanje on piano and Thomas Strønen on drums, who feature on the bassist's recent ECM outing And Then Comes The Night (2019), isn't captivating in its own right. Quiet rumblings and careful crescendos on a pedal point shared between piano and bass, as heard on "Memorabilia I," shake up the call-and-return phrasings on vocal-featuring exhibitions, while "Memorabilia II" fills time and space with a hands-off approach, and finds the trio savoring the utterly transparent sonic properties of the recording to their fullest. When the women's voices enter, the instruments take a step back, but their roles remain on a par with those of the singers. On pieces such as "Soma da du" or "Snøfnuggene" this combination of the two trios creates powerful crescendos which live off of polyphonic vocal treatment within minimal harmonic frames. Eilertsen's last trio outing for ECM demonstrated the bassist's knack for tender melodies over friendly harmonic progressions. His sweet tooth returns throughout Memorabilia and especially so on the lovely "Memorabilia V," whose soft harmonic pace sways the ear to a cradling effect.

As the title suggests, Memorabilia works as a collection of ideas and thoughts from the past that have been bundled and bound together, to form a coherent retrospective. The gracefulness with which each musician interacts with the music's core is especially empathic and gives the nostalgia that envelopes Memorabilia the space it needs to unveil itself completely.