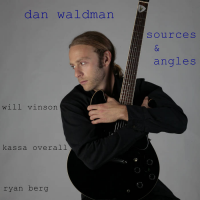 After a couple decades as a busy working player, a fellow certainly should have plenty of angles to play, not to mention myriad sources to draw on in a milieu as exciting as the jazz-fusion tradition. This would explain why Dan Waldman's debut doesn't sound like a debut. He knows his stuff; he couldn't have lasted so long in his adopted home of New York City otherwise. His quartet is likewise as solid as a leader could wish for, and they turn out a spry and classy disc with style to spare.

Sources & Angles leans toward the smoother side of fusion, keeping it classy with the electricity mostly kept to Waldman's clean guitar tones. He's equally classy in the arrangements, where he spends as much time in a rhythm role as he does stepping in front. Will Vinson's sax seems at least as prominent; his melodicism fits the leader's ear-pleasing compositions like a good-fitting suit, and if the contemporary jazzy moods are familiar ones, the performance doesn't lose any luster for it. Even at the slowest ebb through the lugubrious "Bowery & Patternation," they're carefully weaving a slow dance rather than simply drifting or dragging.

The dreaminess never goes away completely, even while "Planet Vulcan" glides into territory too party-like to be logical, and the ending "Beginning" turns up the juice most of all with dashes of echo and wah-wah. Waldman's quartet swings, banters and reliably charms through it all. If it is all a dream, it's one as sharp and suave as the city-wide melting pot from which it comes.