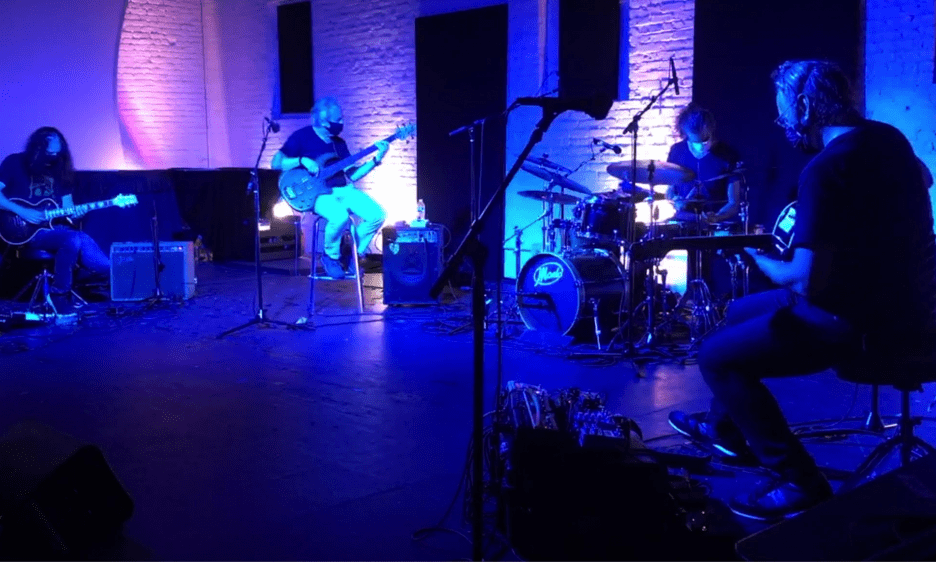 For their live stream concert from Brooklyn's ShapeShifter Lab, guitarists Alex Skolnick and Tim Motzer, fretless bass guitarist Percy Jones and drummer Kenny Grohowski followed New York's pandemic guidelines: they wore masks and maintained a six-foot social distance. So retroactively, organizer Leonardo Pavkovic dubbed the group PAKT. They are all very experienced players. Skolnick is best known as the lead guitarist in the thrash metal band Testament; he went on to freelance work, playing jazz with his Alex Skolnick Trio, and experimenting with World Music. Motzer has a long background in free improvisation as well, including the bands Bandit65 (with fellow guitarist Kurt Rosenwinkel) and Orion Tango, plus many other recorded collaborations for his 1k Recordings label. Welsh bassist Jones (now a New York resident) is known for his tenure in the jazz fusion group Brand X, as well as extensive studio work (especially with Brian Eno). Grohowski does not have a comparable discography—apart from the recently released Reuter Motzer Grohowski: Shapeshifters (MoonJune Records, 2020)—but clearly held up his end in this equal partnership.

The music was presented as two sets of completely improvised music, each a little over 50 minutes long. The first set began with gentle guitar, joined by bass and cymbal washes. After conversation between the guitarists the full rhythm section engaged (including a bit of call and response between Skolnick and Jones' fretless bass). Skolnick took his first real solo, full of long sustained notes, reserving more virtuosic display for later. About ten minutes in they dropped down to low volume and a group texture. This sensitivity to dynamics continued for the entire show. The sets were each played continuously, but there was a strong sense of movement: both volume and texture ebbed and flowed, like a set made up of a group of songs. After Motzer's first solo the volume went way down, into a rubato feel with bits of sampled news voices, scraping guitar noises, and Motzer's bowed guitar —an abstract soundscape. Other set highlights included a big Skolnick solo with overdrive and harmonizer (and his trademark speed); Motzer's solid-body guitar solo (switching from the acoustic-electric he favored most of the time) with wild whammy effects worthy of David Torn; and a section with a full stop, followed by Skolnick manipulating loops. The set ended with Skolnick's unaccompanied guitar and an electronics fade out.

After a brief intermission (just like a live show in person!) the second set began with Skolnick's electronic looping with gentle bass and drums with brushes. Motzer took a rare acoustic guitar solo (he usually employs electronic processing, even when playing an acoustic-electric instrument). As the set built in intensity Skolnick took a full-on heroic solo, full of ripping and shredding. As in the first set, this was followed by a breakdown with loops and a light rhythm (drums with beaters). An ostinato built into an overdriven Motzer solo, with additional electronic processing as part of the mix. A rubato section again included bowed guitar, with Skolnick employing tapping and his whammy bar—another abstract soundscape variation. Motzer played a bit of slide; Jones got a couple of striking solo spots; and at one point Grohowski played his drum kit with his hands. A slow rubato fade with bass harmonics, delayed guitar and textural drums looked like the end of the set. But then the band went into a final rhythmic buildup, with a Skolnick solo and big drums, before coming to a sudden end. A satisfying conclusion to a fearless, rich night of music making. Fascinating to watch as well: like being a fly on the wall at one of the improvisational MoonJune Records recording sessions. In fact a mixed and masted album from the 24bit multitrack files is promised before Christmas.