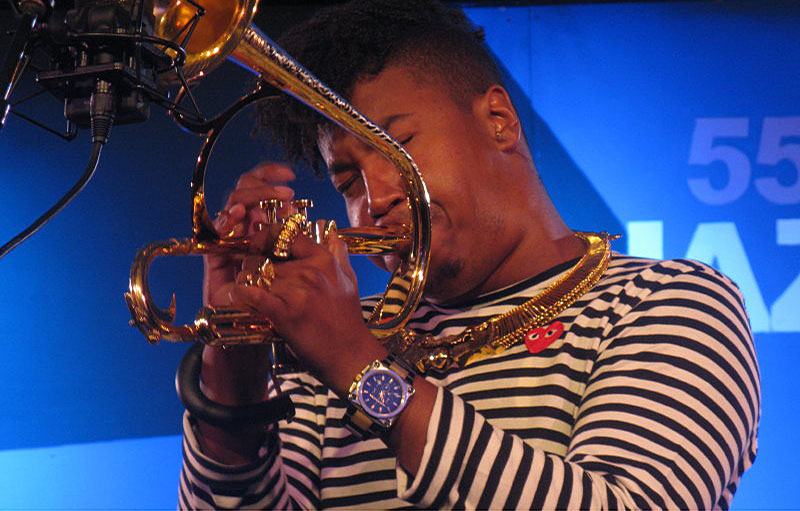 By Larry Taylor
October 18, 2012
Sign in to view read count
Monterey Jazz Festival
Monterey, CA
September 21-23, 2012
Standing out this year at the 55th Annual Monterey Jazz Festival, as expected, were the three honorees—Ambrose Akinmusire, Bill Frisell and Jack DeJohnette. Besides receiving accolades they also had busy schedules, appearing in concerts in the festival for three-days, Sept. 21-23, at the Monterey County Fairgrounds in Northern California.

As always there was a surplus of things to see on the large outdoor Jimmy Lyons Stage and at five additional venues throughout the grounds. Music filled the air, afternoons to late evenings, performed by the best musicians from around the world.

Trumpeter Akinmusire, at 30, was the youngest of the honored recipients. He was featured with his quintet Friday night in the cozy Dizzy's Den. Dubbed as another Miles Davis by many, he was a dynamo during the concert, starting at a low level but soon ascending to full force. He was ably backed by Walter Smith III on tenor, Sam Harris, piano, Harish Raghavan, bass, and Marcus Gilmore, drums.

The Akinmusire group showed why it is worthy of praise, performing unannounced originals in a wholly original style—beyond post-bop. Toward the end, slowing the pace, trumpeter played a moving ballad with the pianist providing grace notes.

Akinmusire was heard again Sunday afternoon with the New Generation Band, made up of student winners from across the country. He was, himself, a member of this all-star band while a student in Berkeley a few years back. The band was precision-perfect under Paul Contos' direction. Midway, Akinmusire came on to join in, resulting in a rousing dueling-trumpets session with none other than Adam O'Farrill, son of Cuban jazz great Arturo O'Farrill. One could bet Adam will be a future featured performer.

Fittingly, Akinmusire ended the festival playing with the Monterey Jazz Festival touring band with personnel that includes vocalist Dee Dee Bridgewater and pianist Benny Green, along with Chris Potter, tenor sax, Christian McBride, bass, and Lewis Nash, drums. Bridgewater stood out in the opening number, a tribute to Billie Holiday, "Don't Explain." Later the band stirred the crowd with a fast-paced take on Bobby Hutcherson's "Highway 1." With the fleet-fingered Green in charge, the band will tour four months next year.

Honored guitar veteran Frisell was given a festival commission to compose, "Glen Deven Ranch," based on the scenic Ventana Wilderness area which contains picturesque views of the Pacific Ocean. This was perfect fodder for Frisell's music, celebrating rustic Americana as he performed the piece early Saturday evening with his newly formed Big Sur Quintet which included viola and cello. The music of Frisell expands the range of jazz to include folk and country. What stood out in the performance is the way his group of musicians played around, going back and forth with chords, riffs and traces of melody. As soon as one picks up and expands on an idea, they are off. Following that pattern in the number "Shenadoah," the traditional folk tune breaks through. As it increased in force, it was truly an inspiring moment. The set closed with Kang's viola taking the lead on Billy Strayhorn's "Lush Life."

Jack DeJohnette is clearly a seeker of the new, as was his first boss and mentor, Miles Davis. One of the best traditional jazz drummers, at Monterey he ventured into new territory with his new group: Rudresh Mahanthappa, alto sax, David David Fiuczynski, guitar, George Colligan, piano and keyboards, and Jerome Harris, electric bass, acoustic guitar. With the master drummer at the helm, they brought in elements of Indian and Middle Eastern music, merging them with smooth jazz and post bop. This group is a good illustration of one of the roads jazz is taking today. The crowd, with many young attending, appreciated it and applauded loudly.

Over the years, there have been many great piano trios at the intimate Coffee Gallery. With an early show, this venue was the first performance stop on Friday to see the great Mulgrew Miller. This veteran pianist from Mississippi is the go-to guy on many recording sessions. Highly respected by fellow musicians, he seldom receives the personal recognition he deserves.

Miller was in Monterey with his regular trio, Ivan Taylor, bass, and Rodney Green, drums. A commanding figure, he adds stature to everything he plays. He lifted "If I Should Love you" to new heights, assisted by the muscular pull of the bass and drums. On an earthy version of "Monk's Dream," he proved the adage: "You can take the boy out of Mississippi, but you can't take Mississippi out of the boy."

Later Friday, Gordon Goodwin's Big Phat Band on Lyons Stage was a truly modern, revved-up band with a big sound. Tenor sax man Eric Marienthal contributed a blistering solo on "Hit the Ground Running," and it brought the crowd to its feet.

Vocalist Melody Gardot, a woman making strides on a new path, was up next. A self-proclaimed citizen of the world, this Grammy winner brings a variety of influences to her work, including elements of Spanish, Portugese, vocalese, even birds and whistles. She sang fetchingly from her collection of compositions, but, unfortunately, was hindered by the large outdoor venue's und system which often made it impossible to make out her lyrics.

Saturday afternoon is for the blues, and Trombone Shorty and his group from New Orleans were the stars. Shorty, with his rapid-fire bursts on the horn, streaking over his eight-piece band's wall of sound, became a mixture of new and traditional Orleans sounds.

Shorty's vocals went back to the mid-fifties into Cab Calloway territory with his riff on "Minnie the Moocher" and brought in touches of Ray Charles. The whole long set was truly good-time music. Perfect for the sunny day outdoors.

Anther vein of New Orleans was on display with trumpeter Christian Scott aTunde Adjuah's group in a standout set in the Night Club. Also from the "Big Easy," Scott and his music deals with bad times, particularly problems and hardships from post-Katrina. He has a message that could be understood by an angry James Baldwin from the sixties.

Regarding "Klu Klux Police Department," Scott said that it deals with his frustration from being picked up and detained, apparently because he was black. Before playing, he readied his group for battle as he crouched. Rising from a coiled position, his trumpet unleashed a battle call. All intensified with the guitar of Matthew Stevens, and bass of Zweleke-Duma Bell adding to the turmoil. But Scott is able to calm down and did, with a lovely ballad with pianist Lawrence Fields accompanying.

Tierney Sutton is not just a singer of the American songbook. Her arrangements make a number she sings uniquely her own. This was well illustrated Saturday night in the Night Club.

Her group, featuring Christian Jacob on piano, has been together for 20 years. It shows in the band's crisp, cohesive sound, from the very hip "Devil May Care" to the frenetic tongue-twisting version of "I Get A Kick Out of You." Her opening medley from "Porgy and Bess" was particularly effective as well, putting the Gershwin tunes in a new light and making it difficult ever again to think of Porgy as "beat down" and subservient.

Catherine Russell was another singer who made a big impression Saturday during her packed Garden Stage appearance. She sings in the tradition of Bessie Smith and Esther Phillips, and her rendition of Phillips' "Aged and Mellow," expressing how she likes older guys, had a sea of gray heads shouting: "Yeah!"

Finishing up the night by dropping around the Lyons Stage to see the last of Tony Bennett's set, the 86-year old great was amazing, never flagging during a 20-song set. He ended up with the transcendent ballad "Fly Me to the Moon."

Following Sunday's appearance of the student bands, the very popular Esperanza Spalding took the stage late in the afternoon. She had her 11-piece Radio Music Society Band, which combines jazz and new age-like inspiration music. With a large following of fans in the seats, her bass in hand, her small stature belied the strength of her voice. She urged the crowd to sing along with her on "Radio Song," and they happily obliged.

At the Night Club, the Sunday night Organ Blowout is always popular. The first act was guitarist John Abercrombie's trio. The audience quickly turned-to with the scorching starter, "Gone With the Wind," Gary Versace pulling out the stops on Hammond B3, followed by Larry Goldings and Chester Thompson.

Serendipitously, one of the best performances had been saved for last—pianist Tigran Hamasyan and his trio at the Coffee Gallery. A truly spectacular player, this creative musician from Armenia astutely blends jazz with middle-eastern folk music. On the way, he brought in wailing, technically-enhanced vocals and bombastic solos that had the crowd on its feet.

One of the things festival-goers look forward to is the variety of foods available in stalls on the grounds. There is never any need to leave the festival to get something to eat. It was all here, and delicious, from Ghanian chicken, beef and pork barbecue, sushi and rice bowls, to Indian fare and fried artichokes, strawberry shortcake and lots more.