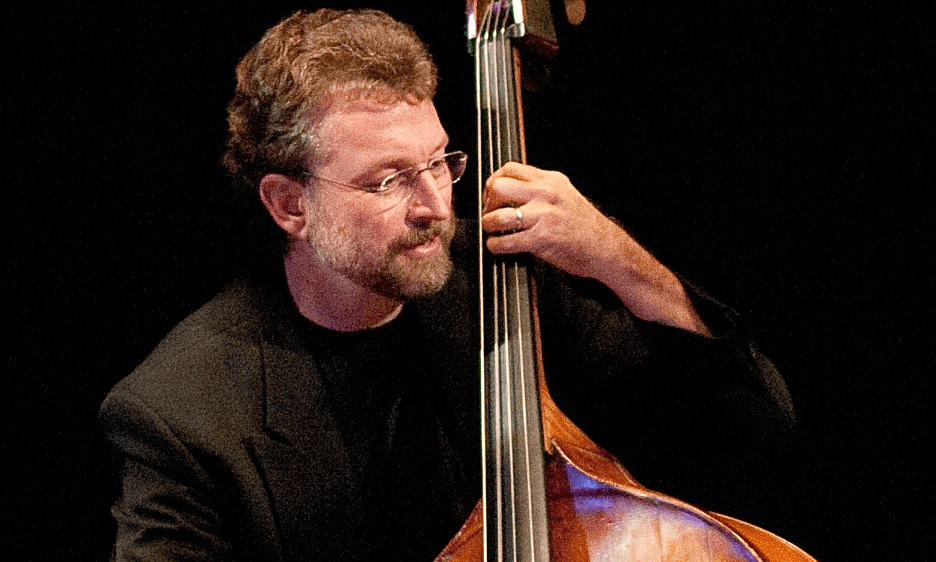 As a bassist, you're singing, but you're also hanging on to the groove.
&#151Chuck Deardorf

With this series of features, I will introduce you to twenty jazz musicians currently living and working in Seattle. It is not to be seen as any sort of ranking, it has no positional value in that regard. It is simply an effort to introduce the jazz world at large to the vibrancy and innovative nature of the jazz scene in and around the jewel city of Seattle, Washington.

The first time a jazz fan in Seattle would have chanced upon bassist Chuck Deardorf, would likely be in the confines of Jazz Alley on University Way, a club Deardorf fondly refers to as his "graduate school." The small bistro in the University District neighborhood of Seattle was at the time a 100-seat club that presented touring artists, often accompanied by top end local players. Despite a notable jazz history, Seattle remained a bit of an outpost even then, in the mid-seventies, when Deardorf began to make his mark.

At Jazz Alley, and other clubs such as Parnell's in Pioneer Square, Deardorf became the first call bassist, setting the standard on his instrument, in his city, that exists to this day. Over time, one would see him performing with the likes of Chet Baker, Zoot Sims, Art Farmer, Monty Alexander, Kenny Burrell, Marian McPartland, Mel Lewis, Joe Williams, Kenny Werner and Tal Farlow. He has since gone on to record and tour with Don Lanphere, George Cables, Kenny Barron and Larry Coryell.

" It started with Parnell's actually. It was the first jazz club in Seattle that I worked in. I was working a lot with Denny Goodhew, and Barney McClure at that time. Barney was getting gigs there at the time with his own band, and backing up people like Eddie "Cleanhead" Vinson, Chet Baker, Zoot Sims, Monty Alexander, just a whole bunch of people like that. Playing gigs like that at Parnell's and then at Jazz Alley was my graduate school. I never went to graduate school, but that was it. For a while, Jazz Alley went down to just piano and bass. I got to do two weeks with Kenny Barron, two weeks with Alexander, Kenny Burrell. That's where I met George Cables. Finally he brought drums in and Dean Hodges would be on the gig. It was a fun time, I learned a lot," he recalls.

Deardorf is largely self-taught, and at first played primarily electric. By 1975 he had pulled the frets off his Fender bass, and begun learning upright. His education on the bandstand became a profound influence on his approach to education when he began teaching at Cornish College of the Arts in Seattle in 1979, ascending to full professor and Director of Jazz Studies. In an art form that increasingly is influenced by institutions of higher learning, Deardorf offered the grounding wisdom of his experience playing with artists of the highest caliber.

"I was the Jazz Program director at Cornish. Being self taught, I learned all of the pitfalls of that. At the same time, I learned that if you're determined enough you can learn how to do stuff. Do the work, not just the schoolwork. Do your own independent digging down to learning your instrument, listening, transcribing, taking the time to get good at what you're doing," he says.

The question then arises concerning being a musician performing with a wide variety of original voices. How then, does an ultimate sideman such as Deardorf find his own original voice within the music of others, and the expectations of groove that come with being a bassist?

" I think it's imperative. You do it through other people, it doesn't happen in a vacuum. Part of what I do as an improviser comes from being a trombone player. I could play lines, I already had that in my head. When you're a bassist, everyone is pounding it in your head to play the root. When it's time to solo, play what's in your head. You have to find a way to just sing. As a bassist, you're singing, but you're also hanging on to the groove," says Deardorf.

Deardorf's recent solo release Perception (Origin, 2019) features covers from composers as diverse as Keith Jarrett and Steve Winwood. The album is divided between two bands of his closest musical associations. The opening quartet of Deardorf, pianist Dawn Clement, saxophonist Hans Teuber and drummer Matt Wilson, have a lengthy history together as colleagues at Jazz Port Townsend. Pianist Marc Seales, drummer Gary Hobbs, trumpeter Thomas Marriott and multi-instrumentalist Jay Thomas fill out a roster of the best the vibrant jazz scene in Seattle has to offer. Rising to the surface through it all is the elegance of Deardorf's playing plotting the direction the music takes, moment by moment. He is a stylist in the true sense of the word, employing the groove with grace and innovation.

Deardorf's time at Cornish, and in Seattle, has placed him in a veritable incubator of forward thinking musical souls. He cites a long list of colleagues that he has worked side by side with, performed and recorded with, and just plain had the good fortune to befriend. Among them are two historic bassists of very different accord from whom he benefited.

"Gary Peacock was teaching at Cornish when I first arrived. I started teaching there because Gary didn't want to teach the electric bass students. Jim Knapp hired me. I never studied with Gary, but I got to observe him a lot. He was, and is, an amazing artist," he recalls. He adds, "Buddy Catlett was a great guy. I loved hearing him play because he played who he was. He didn't try to sound like anybody but him. He took his time during a solo, he was melodic, and played time. I learned a lot from him. Don't try to play like anybody else, play who you are."

Deardorf can be heard performing regularly in the quintet of celebrated Brazilian pianist Jovino Santos Neto. Between the energetic virtuosity of Santos Neto, the one mind percussion of Jeff Busch and Mark Ivester, and the eclectic interactions of vibraphonist Ben Thomas, Deardorf creates a foundation rooted in the jazz tradition. He seems to be the conduit through which the energy of the band flows, leaving room within the groove for innovative, original thought. In many ways it typifies what jazz fans in Seattle, and around the world have seen and heard from Deardorf for more than four decades in terms of virtuosity delivered with elegance. At the same time, he has set a standard of professionalism that has been, and continues to be, hugely influential on the scene in his home city of Seattle.