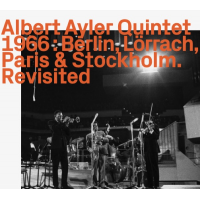 It may sound odd to describe the music that Albert Ayler's quintet performs here as the musical equivalent of comfort food, but these sounds can be associated with security and nostalgia. They are a reminder of the spark ignited by this tenor saxophonist from Cleveland. Ayler, maybe more than any artist of his day, paved the way for free jazz by linking it to the music of New Orleans, African-American spirituals, marching bands, and national anthems. If no Ayler, then no Mats Gustafsson and, although he disagrees, no Peter Brötzmann. In Ayler's brief eight-year recording career (1962-1970), he revolutionized jazz, shocking critics and listeners alike.

For those just catching up with his music, these 1966 concerts maybe the best place to start. Unlike the fierce and frenzied music Ayler produced in 1964 and 1965, these tracks, although not tame, act as a salve. Ayler's quintet was booked on this 1966 European tour by George Wein's famous jazz festival organization and dubbed "Newport in Europe." Ayler's quintet performed alongside Dave Brubeck, Stan Getz, and Sonny Rollins. Touring in the wake of Brubeck's Time Out (Columbia, 1959), Getz' Bossa Nova, and Rollins' East Broadway Rundown (Impulse!, 1966) we find the revolutionary Ayler. How would he be received?

Judging by the response heard on these four dates, splendidly. The word on Ayler's music must have circulated around Europe after his 1964 tour with Don Cherry, Gary Peacock, and Sunny Murray. The crowds were ready and hungry for this 'New Thing.' Ayler didn't disappoint. While this music has been released before, it is nice to see it all in one package. This new quintet includes brother Donald Ayler on trumpet, and violinist Michel Sampson from the At Slug's Saloon (1966) sessions, but on drums Ronald Shannon Jackson is replaced by Beaver Harris. Bassist William Folwell would stay with Ayler through his last official releases, New Grass (Impulse!, 1969) and Music Is The Healing Force Of The Universe (Impulse!, 1970). Most of the Ayler's (both Albert and Donald) compositions are repeated at the four venues, with the addition of Pharoah Sanders' "Japan" heard only in Stockholm.

The key to these recordings was not only the crowds' reception, but Ayler being in his happy place with brother Donald at his side. Also, the addition of Sampson's violin elevates Ayler's music. The classically trained violinist helps to shape and establish Ayler's bona fides by validating the sound. "Bells," "Ghosts," "Omega (Is The Alpha)," and "Truth Is Marching In" are magnified and ennobled here. What was conceived as a march, a spiritual or folk music sounds almost sacred in these performances.