By Mark Corroto
February 8, 2017
Sign in to view read count 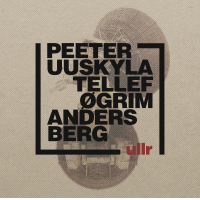 Thirty years ago, the trio Power Tools made a one-off recording Strange Meeting (Antilles New Directions, 1987). The long out-of-print LP by Bill Frisell, Melvin Gibbs, and Ronald Shannon Jackson is on many a collector's want list. While only a short-lived band, its memory persists. It was for many, a perfect storm of free-metal-jazz music. If I had one wish, it would be for drummer Ronald Shannon Jackson (1940-2013) to still be with us. And Tony Williams. Okay, two wishes. I miss Elvin Jones, too. Let's stop there.

Jackson and Williams were pioneers in the synthesis of jazz and rock. Both created a fusion music that did not dilute either genre. While we have no more Power Tools music, there is the Scandinavian power trio led by drummer Peeter Uuskyla to fill the void. Uuskyla is probably best known for his work with German free jazz saxophonist Peter Brötzmann. In addition, he has worked with the legend Bengt Nordström and released a captivating solo session Daydreaming Nerves (Omlott, 2014). The drummer is joined here by bassist Anders Berg and guitarist Tellef Øgrim.

The music is charged with the distinct accents of free jazz, rock and blues. All cemented together by Uuskyla's drums. The title track opens with a flurried electric bass run, some scattered guitar, followed by machine gun blasts of drums. The piece thunder crawls behind energized drums and the resurrection of some Sonny Sharrock licks. Uuskyla, the ever inventive pulse master, opens "Shine Your Soul" with handclaps, then simple sticks and brushes on metal and skins that frame the most meditative piece on the recording. The trio plays a phantom funk and blues. Øgrim's guitar on "Disembark Then Board" has the same disaffected sound you might hear from a mutinous Marc Ribot session and Berg's bass hovers somewhere between that of 1970s Stanley Clarke and Last Exit's Bill Laswell. Pulse master Uuskyla glues this affair

Disembark Then Board; Ulrr; Lusk; Shine Your Soul; By The Southward Verging Sun; Wulpuz.