By Roger Farbey
February 8, 2017
Sign in to view read count 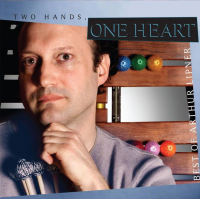 Arthur Lipner is one of the most prolific vibraphone and marimba players working on the New York scene. His musical influences are eclectic having performed with Tuvan Throat Singers from Russia, The Saakumu Dance Company of Ghana, in Chiapas Mexico's "Marimba Park," at the Royal Palace in Marrakesh, in the mountains of Norway on an ice xylophone and many other locations. Brazil has also played a big part in his life, Lipner having toured there repeatedly and premiering the concerto "Mallet Fantasia" he co-wrote with Jens Wendelboe in Rio de Janeiro.

Two Hands, One Heart is a double album, one CD comprising an acoustic set, its counterpart an electric one. This is also a 'best of' album and the 24 tracks are gleaned from Lipner's numerous recordings. His first solo project was entitled In Any Language released way back in 1991. Most of the numbers are Lipner originals (he's composed around 100) but there are also a handful of songs written by others including a lively version of Jimmy Giuffre's "Four Brothers."

The acoustic set boasts some very strong tunes including "Rio," an elegant paean to the Brazilian city and "This Is What The Silence Sounds Like," an excursion for both marimba and vibes. An affecting reading of Don McLean's "Vincent" is followed by "Cool Desert Rondo" which amply demonstrates, in addition to his obvious virtuosity, Lipner's not inconsiderable ability as a composer.

Of the electric disc, the tunes never stray into heavier jazz rock, but remain nearer to Yellowjackets / Rippingtons fusion territory. The music here is convincingly skilful and again benefits from imaginative and lithe arrangements such as is heard on "Lime Juice" or the sultry and aptly titled "Mood Vibe." There are occasional musical diversions such as use of steel pans on the sunny "Mango Man" and more Latin American allusions with "Blue Tango" and "Brasil's Hold On Me." This is indeed a rewarding and satisfying "best of" compilation by a fine and hugely talented instrumentalist.