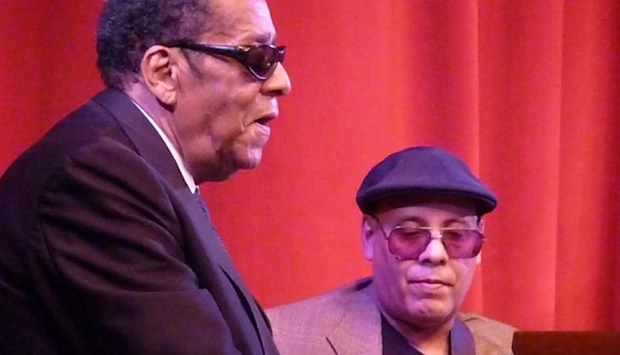 Like most jazz festivals, the Tri-C JazzFest Cleveland, now in its 32nd year, features a fair share of tributes to jazz legends. Slated this time around were tributes to usual suspects Miles Davis, John Coltrane and Ella Fitzgerald. But caps were also set to be tipped to singer Betty Carter and prog-rocker Robert Wyatt. Oft-repeated in the opening days of the festival was artistic director Willard Jenkins' mantra of featuring "artists new to the community," a promise fulfilled in the booking of artists such as France's Orchestre National de Jazz, Ambrose Akinmusire and Tia Fuller. The festival also continued its tradition of giving a stage to local talent, with both locally and nationally known Clevelanders out in force, among them saxophonists Ernie Krivda, Howie Smith and Dave Sterner, bassist Glenn Holmes, and trumpeters Sean Jones and Dominick Faranacci. The tradition of staging many free shows continued as well. And a welcome wrinkle came in the festival's reach into a broader array of Cleveland venues, including Severance Hall, The Hermit Club, the Rock and Roll Hall of Fame and various area churches.

The festival kicked off with what was technically a "Special Preview," returning to the historic community arts center Karamu House where, as in years past, the venerable Eddie Baccus, Sr. held court with his Hammond B-3 organ. Joining Baccus for the summit this year was organist Bobby Floyd, setting up a contrast in styles similar to last year's show with organist Tony Monaco. Baccus, whom radio broadcaster Michael G. Nastos once pegged as "the bridge between Jimmy Smith and Larry Young," maintains an ever-cool demeanor, as his right hand releases fluid and intellectual—yet soulful—passages, while Floyd favors chest-tingling power and emotion over subtlety. In his introduction to the show, festival artistic director Willard Jenkins dubbed Baccus the heavyweight champion, Floyd the contender. And, as they say, styles make fights.

And for several rounds, the bout was, indeed, enjoyable. Along with the organists, saxophonist Eddie Baccus, Jr., vibraphonist Cecil Rucker, guitarist Bobby Curry and drummer Perry Williams III ran through a set of hard-bop and R&B fare well suited to the band's makeup. The guys were up and the crowd was with them. Eddie Jr. blew deep, impassioned soul, Rucker pounded away in bright, if predictable, fashion, and Curry rode a relaxed, full tone. Floyd opened with vibrant, sustained notes, undercut by a swampy blues feel—a mode he adjusted nicely throughout the evening, attacking a power-soul core from various angles. Eddie Sr.'s solos—intricately patterned counters to the bombast about him—delighted each time they rolled around. With a dexterity and nimbleness untouched, seemingly, by age, the Champ dictated multidimensional thoughts effortlessly, often lifting Floyd's preceding statements and twisting them into sharp, skating lines that rose, plummeted, broke and surged back upon themselves like waves.

But after a couple tunes, the program became predictable, following the same solo rotation and adding little new, with the exception of Eddie Sr.'s passages and some by Curry, in particular his sly quoting of "My Favorite Things," à la Grant Green, in the midst of his "When Johnny Comes Marching Home" solo. Still, after eight tunes and 80 to 90 minutes, the group had turned in a lively set of jazz-organ music, and had reached a natural conclusion. Unfortunately, they went on, bringing guests Roger Baccus (Eddie Sr.'s organist brother) and singer Michael Cady onstage to push on to the two-hour mark. Better to have substituted these last numbers for a few of the first eight, instead of tacking them onto the end. Still, the set, undeniably, provided an energetic boot to get this year's party started.

The official kick-off day started with a second line parade featuring the Stooges Brass Band from New Orleans and Cleveland's own celebrated Shaw High School Marching Band. They paraded from the Terminal Tower at Public Square a few blocks east to the House of Blues. There, the Stooges turned in a rollicking, at times slapstick, set that meshed traditional Crescent City jazz with hip-hop. Augmenting their amped brass attack with repeated calls like "We Got That Fire" and "You Gotta Wind It Up" (the latter as they split the audience for a dance contest), the Stooges duly stoked a crowd that ran broadly from those in their mid-teens up to middle-agers still fit (at least in mind's eye) to boogie. 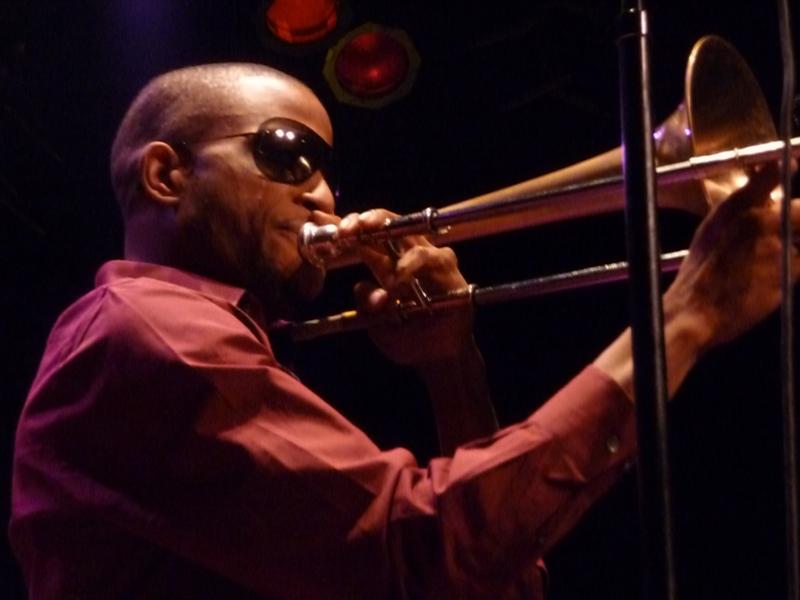 Later came young New Orleans phenom Troy "Trombone Shorty" Andrews, strutting on stage with his trombone and trumpet held aloft like boldly scored hunting trophies, the funk from his Orleans Avenue band thumping wickedly, heroically about him. Shorty soon joined in, his right leg set forward in a solid, athletic stance that supported the in-your-face blast from his trombone. He and his band never let up, keeping the crowd grooving to hits like "On Your Way Down" and "Something Beautiful" in the mode of what the horn player has termed "superfunk rock": a loud pulsing music that also incorporates heavy doses of traditional New Orleans jazz.

The most traditional—and most mellow—they got was on the swinging "Sunny Side of the Street," on which Shorty blew an impeccably phrased Louis Armstrong trumpet solo, capped by a bright high note, stretched out for minutes without pause to the great delight of the crowd. But the band's take on the standard "St. James Infirmary," while equally pleasing on the surface, spooked with shades of necrophilia once more fully considered. There's something a touch creepy about addressing a girl's corpse ("So sweet, so cold, so fair") in a sexy-sweet, Stevie Wonder croon to a salsa beat. Not to mention striking up a call and response of "hidy-hidy-ho!" Elsewhere, Pete Murano's heavy-metal guitar wailings didn't always mesh with the rest of the band's groove.

But on the whole, Shorty and his troupe put on a hell of a show. Andrews is nothing if not a top-notch showman, morphing through characterizations of Michael Jackson, James Brown and Mick Jagger, to complement his own, athletically flamboyant stage persona. That he has the considerable trombone, trumpet and vocal chops to back up the playacting (and a wonderfully accomplished band—they all traded instruments on the encore and still kept up a powerful attack) means he's a new force on the scene that has to be reckoned with.

Originally scheduled to appear at the 2010 JazzFest, Orchestre National de Jazz had to cancel owing to visa problems. This time around they had problems getting out of New York and had to catch a bus to Cleveland after their flight was cancelled. Once they arrived, however, and squeezed onto a small stage at the Rock and Roll Hall of Fame, the ten-piece ONJ was unstoppable. In an interview with The Plain Dealer's John Soeder, the group's artistic director Daniel Yvinec had said that he "always thought jazz could be more open" in the music it interprets, and, appropriately, ONJ's gig was scheduled against Dee Dee Bridgewater's tribute to Ella Fitzgerald, taking place across town with The Cleveland Orchestra. Yet ONJ, a project-based unit that has fashioned programs based on the music of Billie Holiday and John Hollenbeck, among others, was pulling off something of tribute of its own in this performance of its Around Robert Wyatt (Bee Jazz, 2009) program. 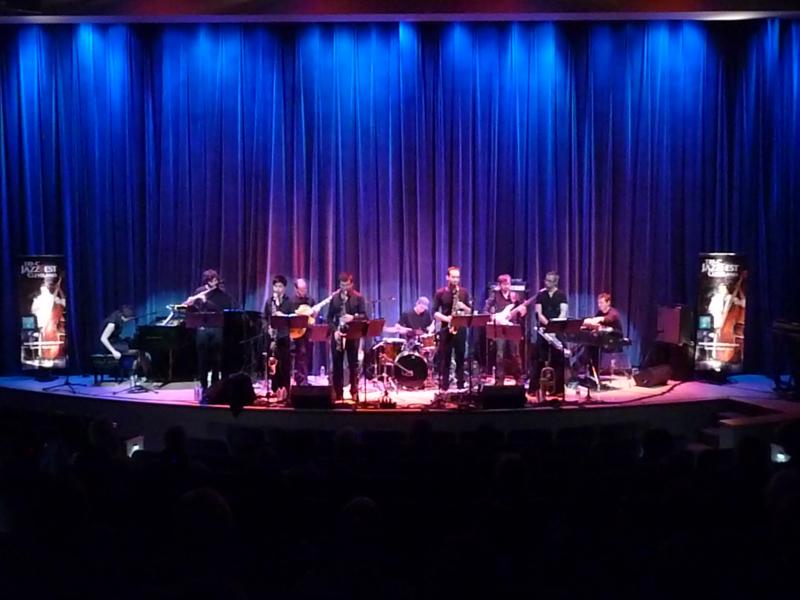 Storied prog-rocker Wyatt collaborated with the orchestra in the construction of this program, and lent his voice to it. But here, Wyatt and the other male and female vocalists existed only in a recorded context, which gave them both a more pronounced presence and an ethereal distance. (Why, perhaps, in his introduction, Yvinec termed these "ghost voices.") Yvinec spoke also of cinema, of restoring the voice to its primal, lead-actor role in the recording process. And, indeed, many of the arrangements rose and fell with a lush, cinematic sweep, creeping even into Hitchcock terrain on "Kew Rhone" with a repeated horn arrangement that might have set Bernard Herrmann on edge.

Elsewhere, the group employed various scrapes, clanks, bleeps and other clattering percussive devices that recalled latter-day Tom Waits (especially when guitarist Pierre Perchaud switched to banjo). "Rangers In the Night" lifted from solo drum rim taps into a full, percussive composition made of fluttering saxophone keys and horn-filtered human breath. Wyatt's voice, when it arose, repeated the lyric over and over as if in warning: "Strangers in the night. Strangers in the night." With flute and trumpet solos, came more crashes and electronic noise, including something of a siren that fed into a pounding piano solo from Eve Risser that saw the piece into a rollicking climax—the end to an amicable sexual encounter or something more sinister and violent, the terror of a world of passing strangers on darkened streets.

Risser later fashioned layered constructions of her own, reaching into the bowels of her instrument to scrape, pluck and knock out enchanting, enthralling stretches of percussion piano music. Her intro on "Just As You Are" even included strains of a wind-up music box. But her several-minute solo piece, built entirely of these piano manipulations and including vibrant string swipes, sustained ringing, rhythmic knocking of blocks, sounds of a clanking harbor bell, the whir of finger-traced glass, plus traditionally struck keys, was the marvel of the night. Yet through a set that could have easily (in lesser hands) deteriorated into nothing but abrasive clanking and electronic whining, ONJ kept matters wonderfully musical, even melodic. Unlike many a music show, there was a fully formed and fully realized musical vision that, to Yvinec's undoubted pleasure, operated in multilayered, cinematic fashion, telling a complex, often illusive, but fully satisfying story.