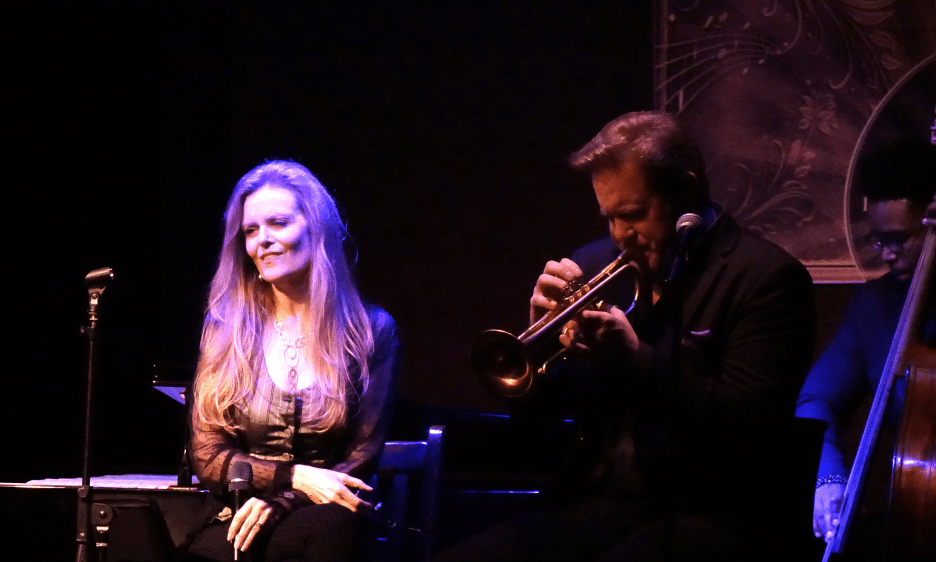 When a lady has chosen nine new outfits, attended nine nerve wracking awards dinners and been nominated for nine Grammys since 2006, it would simply be impolite not to vote for her to win next time. Tierney Sutton certainly deserves to win a Grammy for the quality of her work. In the audience at The Jazz Corner was another of this year's crop of Grammy nominees, Canadian popular and classical orchestral conductor John Russell Morris, who commented diplomatically that receiving a nomination was a tremendous honor and all the musicians were exceptional and deserving.

Tierney Sutton was born in Milwaukee and studied at Berklee College of Music. She now lives in Los Angeles, but has visited Hilton Head Island since she was a girl. She was joined on stage by the leader and trumpeter of Joe Gransden's Big Band with whom she had performed a collection of Johnny Mercer songs the previous day in Atlanta. After visiting the Mercer Museum there, she recounted anecdotally that Mercer sometimes drank too much at parties and feeling remorseful about how he may have carried on, sent flowers to those he imagined he had offended.

The duo were backed by The Eric Jones Trio with Jonathan Baptiste on bass and Robert Sanders on drums. The band set off with "I'm Old Fashioned," one of the many Mercer standards from more than 1,400 lyrics that he wrote. Although Mercer was often depicted at a piano or writing on a score, he was a lyricist not a musician. His contributions were poetic, romantic and descriptive words set to the music of others. His work appeared often in Broadway shows and movies where he won an Oscar which is displayed in the Mercer Museum. Gransden sang and played trumpet while drums tapped the high hat and the piano lid was raised only on the short stay. That set the tone for the evening, the music was played quietly and precisely, enticing the audience to listen and giving space for all the musicians to concentrate on detail and delivery of exceptional quality. They switched to a Gershwin standard next "(It's Very Clear) Our Love is Here to Stay" which Sutton and Gransden sang as a conversational duet. As the music progressed Gransden added trumpet phrases to the conversation. Throughout the delivery was impeccable, nobody was going to strain or split the notes of those romantic ballads. The band continued on in the same style with Days of Wine and Roses capturing those heady times of first infatuation expressed in Henry Mancini's music for the 1963 film of the same title, with lyrics again by Mercer.

Hoagy Carmichael wrote the music and Mercer the lyrics for the beautiful "Skylark" which Sutton sang in rich tones, floating the tune on air, singing on the wing like a skylark, after a light piano introduction and just touches of cymbals from drums. The music moved back to another Mancini/Mercer film score, this time for Charade from 1963. Sutton drifted into a scat opening clicking her fingers to state the waltz tempo played in F minor. The trio picked it up easily, which was remarkable since they had only met three hours earlier. Sutton's finishes were long and often overran the end of songs, hanging gently in the air to fade away.

"Day In, Day Out" is another Mercer lyric which Sutton sang fast, accompanied just by Sanders' cymbal taps and a stick on the snare drum. Her diction was crystal clear and they ended cleanly and sharply together. The band ended the first set with another beautiful standard, "East of the Sun and West of the Moon" written by Brooks Bowman while at Princeton. His songwriting career was tragically cut short when he died in a car accident four days before his 24th birthday.

The second set opened with Gransden demonstrating his recent interest in the Bel Canto style of singing, projecting his voice long and strong without microphone as an opera singer would, in "Fly Me to the Moon." Tierney Sutton returned to the stage to start a conversation just with the bass in "(Tell Them) I Remember You" another Mercer lyric which was a hit for Frank Ifield who in a novelty recording, yodeled it with great gusto. Sutton delivered the tune without yodeling at all. Passing on, they arrived at the sadly dramatic but calm story-telling Nancy Wilson song "Guess Who I Saw Today"? After casual arriving-home conversation, the story line was set, the lady described to her husband how she had seen two lovers together that day. The title question, "guess who I saw today?" was answered in the final poignant line, accusing a cheat, "I Saw You." Nothing more.

Sutton called for suggestions from the audience which Gloria Krolak answered with Tierney Sutton's The Sting Variations (BFM, 2016) which was nominated for a Grammy in the Best Jazz Album category. The album featured a mix of Miles Davis' "So What"? used as the groove with Sting's "Driven to Tears" over the top. On another track, the union of "All Blues" with "Walking in Your Footsteps" was completed in an inventive and thoughtful mix. For some reason this album was discussed but not played so there is a video below to illustrate the concept. Instead, the band moved back to Mercer music for "Early Autumn." Next, a 1943 show and later movie tune from Rodgers & Hammerstein's Oklahoma! followed. Sutton treated "Surrey With The Fringe On Top" as another conversation with a single instrument. On this occasion she chose drums again looking across and saying "It's you and me." Sanders picked up a fast rhythm from her clicking fingers and they raced together brushing along, breaking only for four measures of double time drum solo before they came to a crisp finish together. Sanders broke into a wide smile. It was a fast and intuitive piece, conducted masterfully with simple hand movements and looks from Sutton. To end the performance the band chose Nat King Coles "L-O-V-E," (Is Made For Me and You) from his final album made for Capitol in Hollywood, 1964.

A very fine, quiet after midnight performance rolling easily into inventive territory in some of the best known tunes from the golden era and beyond. The trio and trumpet never once played over Tierney Sutton's precise and delicate voicing. They stayed respectfully within the limits of a soft piano notation, concentrating on style and delivery as Sutton called tunes and suggested keys, gently indicating solos with feather light gestures.