By Ian Patterson
February 12, 2020
Sign in to view read count 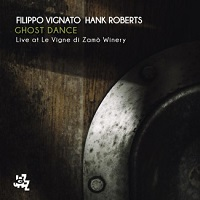 Usually the watering hole comes after a gig, but there would have been enough wine to float a ship at this concert by cellist Hank Roberts and trombonist Filippo Vignato, held as it was in the Vigne di Zamò Winery in North-Eastern Italy. The interplay between the veteran American and the younger Italian on these nine originals is so finely tuned, so intuitive, as to suggest total sobriety, at least at the time of the recording. Ghost Dance is their second collaboration following Pipe Dream (CAM Jazz, 2018)—an absorbing quintet outing with vibraphonist Pasquale Mirra, pianist Giorgio Pacorig and drummer Zeno di Rossi—though this is their first as a duo.

Each musician lends their own compositions, with co-writing credits on three tracks. Improvisation is a key part of the equation, though the challenge is to figure out where freedom navigates episodic form. Cellist and trombonist are both credited as employing electronics, though if so, they do so with the lightest of touch. Vignato, though, needs no tricks to make his trombone sound like a didgeridoo or puttering static on "Carla." Shifting from woozy minimalist textures to greater rhythmic impulse, and from ghostly abstraction to chamber elegance, this atmospheric opener sets the template, to a large degree, for the performance as a whole.

The musicians delve into the timbral possibilities of their respective instruments, with Roberts' vocals breaking the instrumental mould on a couple of numbers. On the rhythmically repetitive "Remembering Then/Now," Roberts' wailing voice seems to emanate from the back of the wine cellar, at the furthest point from the mics. The title track, by contrast, sees the American embrace the self-penned lyrics, and whilst his voice is no great shakes it is distinctly his own. His wordless harmonizing with Vignato, on the other hand, lifts the music to another realm.

"Necklace" is a song within a song; rustling percussive sounds, randomly plucked notes, creaking strings and breathy fluttering give way abruptly to a chamberesque dialog of melancholy vein. Whether luxuriating in essentially the same melodic line, as on the simple yet arresting "Lost Found," or taking circuitous routes to the final destination, as on "Sherwood Z"—where sombre abstraction morphs into gentle waltz—the duo's conversations command attention. The greatest drama is reserved for last, with "Encore. Here, the tense, shifting patterns of Robert's sawing arco and Vignato's pulsating riffing allow for each musician to improvise over constantly churning rhythms. In tune with the unpredictable trajectory of the duo's hour-long journey, the rhythmic intervals lengthen, dissipate and eventually finish on a drone-like plateau of quite serenity.

The fine acoustics of the Vigne di Zamò Winery and the high production values of this CD are important actors in the music. In the end, though, it's the openness and mutual trust in Roberts and Vignato's play, where small and grand gestures carry equal weight, that makes for such a rewarding listening experience.