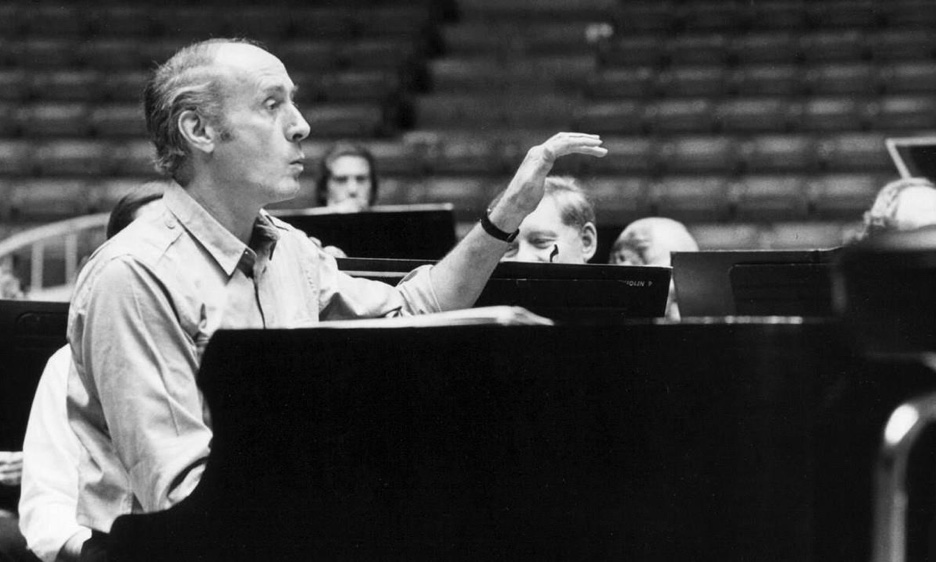 By TISH ONEY
June 28, 2018
Sign in to view read count
Ever known for his peerless and timeless musical masterpieces created for the silver screen, Henry Mancini (1924-1994) opened the 1963 motion picture, "Charade," starring Cary Grant and Audrey Hepburn, with a masterfully written theme bearing the same title. Over his storied career, Mancini won six Grammy awards plus fourteen additional nominations as well as a slew of Oscar and Golden Globe nominations and wins for his film and stage compositions, among several additional awards. His 1961 classic, "Moon River," also co-created by his frequent collaborator, Johnny Mercer, (1909-1976) for yet another Hepburn film triumph, Breakfast at Tiffany's, won the Grammy that year for Best Music, Original Song. The Mancini/Mercer team managed to churn out some of the finest Great American Songbook standards ever composed for the film industry, including those mentioned as well as "Days of Wine and Roses" and "Dear Heart."

Being the mind responsible for the universally recognizable Pink Panther theme with its mystery-evoking use of sneaking, chromatic figures leading to a lingering "sharp four" (reminding us that dissonance can sound wonderful), Mancini treats the melody of "Charade" no less brilliantly. Beginning this waltz in a double-time feel with a Phrygian figure in the first three notes, the composer sets up the listener's ears for a delight of the senses. He then leaps the melody up a perfect fifth where it lands on the ninth of the minor scale, a bold departure from most popular songs of the era whose conservative, often stepwise melodies lent themselves to be sung or played easily by the average listener. The Phrygian semitone relationship returns in the next sub-phrase, but turns its contour downward, eventually finding the ninth an octave lower, in contrast with its initial jump skyward in measure two (the author considers this piece as having sixteen-bar sections instead of the usual eight as in other AABA form tunes). At mm. 9-13, a two-bar motive appears thrice in repetition with a modification on the end. This being the case, the first two (identical) A sections can be broken down into sub-phrases thusly: 4 measures + 4 measures + 2 +2 + 4, with the final sub-phrase having an extension that steps down to tonic.

At the bridge, Mancini shifts the tonal center up a third to the relative major key, giving the minor melody soaring climactic energy at a crucial point in the song. Playing up the potential for a rousing climax, he sends the melody up a full octave from whence it had just resolved into a cadence, to begin the new B theme. The melody continues to climb by step to the new tonic before falling downward by leap through a long string of thirds. The leap of a sixth and a descending delineation of a major triad precede another sixth leap to the fifth of the new key. Then the whole process begins again for the second half of the bridge where the first sub-phrase remains the same, but the last is modified to include stepwise motion that stays in a lower register, reserving its energy for the last A section's late release of built-up tension. The phrase structure of the bridge reverts to the usual stock pattern of sub-phrases, providing necessary contrast between A and B: 4 measures + 4 + 4 + 4. In the final A, the melody stays the same as the first two iterations of A until the final three measures of the tune, "best on the bill, charade," where the formerly downward contour sharply leaps upward to the (flat) third scale degree (also the tonic of the relative major key in the bridge), then resolves down by step to the minor tonic.

Mancini penned one of the most striking examples of a standard set in a minor key when he created this composition. He opens the piece using what jazz theorists refer to as CESH (Chromatic Embellishment of Static Harmony), a clever, ear-catching compositional device also heard sometimes in other notable standards (as in the first four bars of "My Funny Valentine"). Some scholars refer to CESH as Contrapuntal Elaboration of Static Harmony—both acronyms together help elucidate what is actually happening. A chromatically changing contrapuntal line appears within a harmonic passage where otherwise the harmony remains static (for example, Bmi-Bmi#5-Bmi6-Bmi#5, in the case of this song). The changing scale degrees 5, sharp 5, and 6 within the series of B minor chords provide both the chromatic embellishment and the counterpoint referenced in the name of the compositional device. The resulting sound is one of progressively building, then easing, harmonic tension (much like the tension perceived in the CESH of the James Bond theme in which the tonic drones steadily below a chromatically rising and falling, contrapuntal harmonic element). From this device Mancini balances the complexity already introduced with the simplicity of a ii-V7 series in the tonic key. As already mentioned, the bridge begins with a harmonic shift to the relative major key (a minor third higher than the minor tonic), resulting in a highly energetic opening for a bridge. In this case, the bridge's energy starts strongly and then mysteriously wanes as it moves toward the final A.

Johnny Mercer's contribution to this composition nicely complements the high-energy music, harmonic interest, and jagged melodic intervals supplied by Henry Mancini. The words tell the story of a love affair characterized by pretense, much like players in a theatrical production. Mercer goes further with this metaphor, suggesting the scenario of an actual play with a stage, a playbill, a masquerade and "Fate" operating the curtain. At the bridge the singer wails about losing her lover onstage while the "music box" continues to play a sad, haunting, lovers' serenade. As the singer recalls this tale, (s)he comments about still hearing the song in perpetuity and that their late love was the "best on the bill." The self-contained storyline beautifully connects with the music using language strongly associated with the theater, building a fanciful, almost tragic, bittersweet remembrance of love lost.

Mercer's use of rhyme is truly unique in this sample of how great lyricists turn a phrase. Rather than using common, predictable rhyme schemes within a musical theme, he creates rhymes across entire iterations of the A theme. For instance, he pairs the first rhyme, "-ade" of "charade" at the opening with "masquerade" at the end of the first A, but in the meantime sets up two more rhymes. The second rhyme he prepares in m. 7 ("posing") is matched in the second A theme at the same point in the phrase (at m. 23, "closing"). The third rhyme (at mm. 10 and 12) is known as an internal rhyme—it repeats within a sub-phrase ("games" and "names"). This tri-rhyme-type structure is repeated in the second A section, showing a high level of phrase construction and sophistication. Here three distinct types of rhyme scheme are utilized, overlapping one another, all the while creating the exact picture of the scenario desired. None of the rhymes are in any way contrived, but each flow naturally into or around one another as the storyline unfolds, in the manner of a well-choreographed dance.

At the bridge, the rhyme scheme changes, as it nearly always does for the great standards, taking a more simple, predictable pattern. Not content merely to match the ends of sub-phrases with rhyming words, however, Mercer pairs "strings" at m. 35 with "wings" at m. 43, unifying both halves of the bridge with not one, but two rhymes. He then finishes each half of the bridge with a tidy rhyme of "gone" (m. 38) and "on" (m. 46). In the final A, the rhyme scheme continues with the pattern previously set forth for A, with a final drive to the finish using a set of three rhyming words instead of the previous two ("still," "will," "bill") before finishing the piece with the title word, an apropos sum-up of the entire song's meaning.

Mancini and Mercer successfully blended clever compositional devices with a brilliant display of storytelling and rhyme scheme when they co-created "Charade." Mancini's choice of angular melodic intervals, disjunct (leaping) motion, motivic repetition, and CESH in a minor key melded beautifully with Mercer's foray into the dark realms of tragic theater, metaphor, and intricately designed rhymes. "Charade" reveals the genius of this great songwriting team at the peak of their artistic prowess and remains a standard well worth mastering.