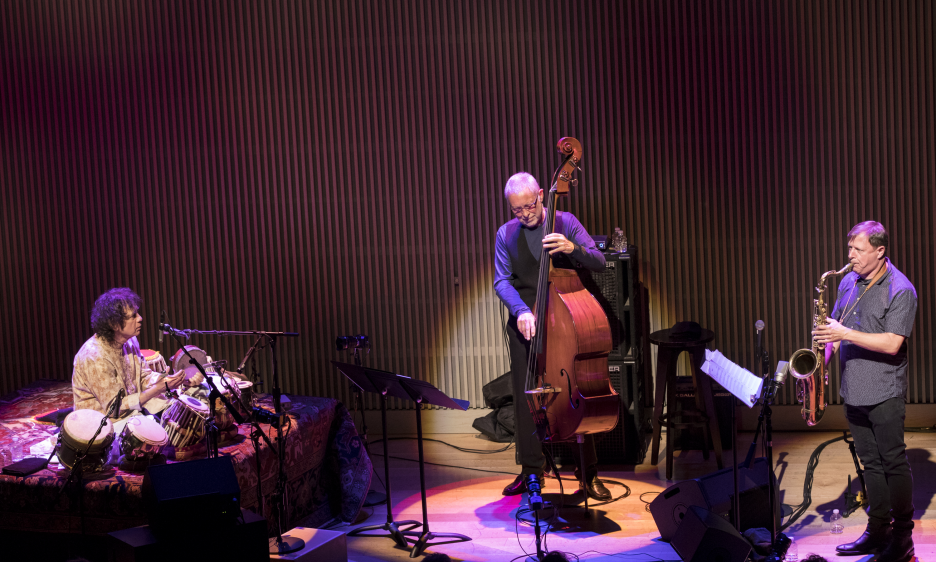 A subset of the fusion group CrossCurrents, the trio of Zakir Hussain, Chris Potter, Dave Holland made their first public appearance ever one Saturday evening at SFJAZZ. Hussain, a San Francisco resident, is legendary for his tabla mastery as well as for his participation in a wide variety of musical groups. Potter, a widely acclaimed saxophonist, needs no introduction. Nor does bassist Dave Holland, a veteran of a number of other combos as well as a bandleader in his own right. At the beginning of the second show, Hussain sat behind his collection of eight different tablas and other hand drums. As "Ziandi" commenced, Hussain dribbled on his tablas while Potter came in soloing vigorously in tandem. Ten minutes into the show, which turned out to be halfway through the tune, the tempo dropped as Holland soloed, playing off of Hussain's riffs. Two of his tablas, placed front and center, received most of the action.

The second number, "Mazad," featured a bass solo from Holland. Potter then re-entered the pastiche by offering sweet yet piquant soprano before soloing exuberantly, his head bobbing up and down. Holland soloed, his blue shirt glistening brightly under the glow of the spotlight. Hussain played his tablas with the back of his hands and with both palms for emphasis.

Introduced by a konnakol vocal, "Jbhai" had a languorous, sonorous feeling before it led into storm surges and circles of rhythm; Potter soloed sweetly on tenor, matching Hussain's tabla moves. The three then played together, with Hussain drumming intensely.

"Doors" opened with a bass solo; then Potter stepped in on tenor, upped his volume and continued along propulsively. "Suvarna" began with a meditative bass solo before the lights dimmed to highlight Potter soloing eloquently on tenor. "Hope," which ended the engaging ninety-minute show, saw Holland solo eloquently before Potter took a turn; the band coalesced into a rhythmic crescendo which then spurred expected and well deserved bows and acclamation.