The True Language Of Jazz 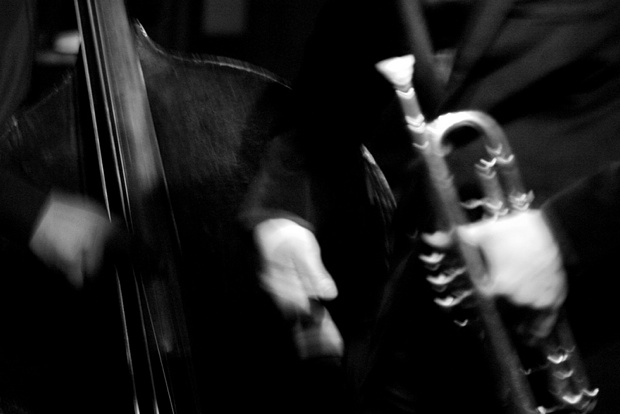 BY DAVID ARIVETT
March 1, 2012
Sign in to view read count
Recently, there has been an upsurge in sales and interest in jazz recordings from the past—especially the 1970s. In a recent Jazz Times magazine article, "1970 Is Happening (Again)," Lee Mergner points out that "at the time rock and funk were, depending on your perspective, destroying or invigorating jazz." Trumpeter Miles Davis, pianists Herbie Hancock and Chick Corea, groups including Weather Report, Jeff Lorber Fusion, Return to Forever...the list goes on and on of the extremely gifted and talented jazz musicians who were committing "blasphemy," according to the jazz purists, by stepping outside the boundaries of swing and embracing funk, rock, R&B and soul beats to create new music.

Downbeat Magazine also recently posited the question: is now the time to reclaim Ray Charles for jazz? The article goes on to state that the pianist/singer's "role, impact and methods as a jazz musician remain underappreciated. Yet ironically, jazz critic Nate Hentoff often related that Charles was a favorite of jazz musicians. Producer Jerry Wexler shares that Charles influenced the shape of jazz..."[pianist] Horace Silver, [saxophonist] Cannonball Adderley, [organist] Jimmy Smith, even [bassist Charles] Charles Mingus—they all dug Ray and got caught up in his spirit." Other well-respected jazz musicians such as [trumpeters] Clark Terry, Blue Mitchell, and Thad Jones all played on Charles' big band recordings. And so the search continues on defining just what the true language of jazz is. Is there even such a thing as "pure jazz'?

Michael Fagien of Jazziz Magazine observes that "for saxophonist Kirk Whalum, it's not about living up to jazz standards; it's about soul music and something even deeper." Whalum goes on to share, in that article/interview, that "when the music gets put on a pedestal, it gets sterile. And that's what's happening to jazz. I'm just not hung up about what's jazz and what's not. I think when people hear me, they say, 'Oh, wow, I thought you said something.' And that's what some of the old jazz cats had. Arnett Cobb would say to me, 'You know what? You ain't saying nothing.' Just like that! 'You ain't saying nothing. You're playing too many damn notes and you ain't saying nothing!'" Whalum goes on to say "I needed somebody like him to help me get that."

Jazz music is the ecstatic, spontaneous, syncopated creation of music that comes from a divine spark. It flows from responding to the musical moment and expressing what an artist feels at that moment. There's way too much jazz music/language today that is basically just "jazz insider" language—C#9b5 with 6 modal scales thrown in, for example. This overly studied, academic approach is what has hurt jazz for the average listener. How much musical dissonance being played is a direct expression of a musician's life and soul? Are you just playing scales or are you really saying something?

Trumpeter Nat Adderley shares an experience that his brother Cannonball taught him, recounted in Rickey Minor's book, There's No Traffic On The Extra Mile (Gotham, 2008). Cannonball told him, "This cat's coming down from Kansas City. They call him "Bird." This cat can put down some sounds." So Nat met up with Cannonball and together attend a [saxophonist] Charlie Parker concert. We arrived at the club and sat down. Bird was playing. A short time later I walked out! I caught up with Cannonball later at a jam session. Cannonball said 'man, where'd you go?' I said 'man, that was nothing but noise...that ain't music!' Cannonball said 'You know the problem with you? You don't like it because you don't understand it! You don't know enough about this style to understand and appreciate it. I'm not saying that it has to be your favorite style of music. But you're ignorant...you're ignorant to what he's doing.'"

While I am all for jazz education (being a jazz educator, jazz composer, and avid promoter of jazz education), the old expression "jazz isn't taught—it's caught" really does make a valid point. Being too analytical of the music can often rob you of the natural emotional responses that should come from hearing and playing the music. Jazz trumpeter Dan Jacobs, ph.d. shares a very profound insight when he says "Don't let an obsession for perfection suffocate your art." Jazz composer/arranger Maria Schneider elucidates this point even further "I want my music to bring people out of their heads and into their hearts so that the most intellectual musician sitting there is no longer analyzing what I'm doing, but I've brought them out of that kind of head space. I think that's where jazz has lost a lot of people and actually lost itself in a way. So many people think that going further and further is getting deeper into the head. It's not. That's not where this music came from. This music came from the heart. And that's not to say that music can't be complex. But when music is complex for complexity's sake, that's where it runs into problems."

The roots of jazz music come from the Negro spirituals, the blues, and church. They are often ecstatic in nature. The dictionary defines the word ecstatic as "an overpowering emotion or exaltation; a state of sudden, intense feeling." A person playing or listening to the music is overpowered emotionally and both the players and listeners can feel it. A person becomes jazzed.

This is not, however, to deny that there are both technical and spiritual aspects to jazz. You have to master the technical aspects to develop jazz language but the rhythmic feel of swing still has a very strong spiritual/emotional element as well—you can't have one without the other. Within the jazz community there are extreme positions taken that only serve to separate and divide it. I think we need to find common ground and the common ground is this: blues and jazz has birthed a myriad of musical styles—swing, funk, R&B, soul, rock, fusion, Brazilian/Latin & Afro-Cuban jazz. And we should be able to appreciate this smorgasbord even though it might not be our favorite style of jazz. Why? Because jazz, in all its flavors, is a gift to be enjoyed and savored.

Leonardo DaVinci once said, "Do you know that our souls are composed of music?" Music and religion are intimately linked and music is one of the most powerful tools to convey religious meaning. I personally think that we have been graciously given the gift of music to transform us from our humdrum, everyday existence, into something out of the ordinary. Whether music excites us or soothes us, it transports us to another place. When we play and listen to music we should be lifted out of ourselves and enjoy the very language of the heavens. So celebrate today and be jazzed!

David is a pianist, composer, arranger, and producer who celebrates and plays jazz in many flavors