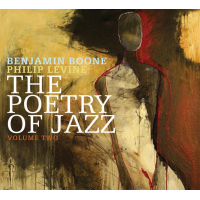 Poetry and music are overlapping forms of expression. Poetry emphasizes the musicality of words. Music has many features of poetry including sound, syntax, and meaning. Still, only a few poets have spoken their poems in a musical context. It is hard to do effectively because speech and music have different functions: speech is about things, intentions, and ideas, about which music can only be suggestive. The spoken word is not the same as a song, words set to a melody. Reading a poem generally calls for background silence, and music does not like distraction either. Yet the late, great poet Philip Levine and saxophonist Benjamin Boone and his cohorts have put together these two forms in ways that enhance both with rarely found depth, sophistication, and listenability.

This review is about the second of two separately released CDs. The first includes special guest artists Tom Harrell, Branford Marsalis, Greg Osby, and Chris Potter. Philip Levine grew up in Detroit, an automotive city which is the basis of many of his poems and which also has a well-known music scene. He always had a love of jazz. The first volume includes several poems that refer directly to jazz legends such as Charlie Parker, Clifford Brown and John Coltrane. By contrast, the poems of the second volume have no direct reference to jazz. The poetry-jazz relationship thus takes place entirely on an intuitive level.

This process is unusual if not unique. If one thinks back over the years, whether it is of Amiri Baraka, Hayden Carruth, Jack Kerouac, Mina Loy, Kenneth Rexroth, Sonia Sanchez, Cecil Taylor or others serving as poets and/or readers, their poems were conceived in a jazz context and sometimes categorized as "jazz poetry." Here, we have poems that do not reference, represent, or imitate jazz. Yet it all weaves together in ways that enhance both the words and the music.

Duncan Heining's revew of the first volume includes an interview with Benjamin Boone that reveals the latter's expertise and craftsmanship with speech, making him especially sensitive to it. Levine, like Robert Bly, was a rare twentieth century poet who knew how to read his poems so that his words flow and pause in a natural way. Boone also suggests that a recording studio was wellsuited to Levine, giving him somewhere to relax yet with good audio and visual access to the music being played. The pairing of Boone and Levine, the affection, rapport, and frequent communication between them, and the felicitous setting, made their efforts work beautifully.

Levine, despite his love of the music, was by no means a "jazz poet." Rather his work emerged through the tutelage of the great American poet John Berryman from the "confessional" and "deep image" poetry that came largely out of the midwest and which spoke of poverty, despair, and personal struggles. Such poetry, which evolved during the same period as modern jazz, is full of the sense of the "blues," tells a story, and has natural "free verse" rhythms rather than the formalisms that characterized the American and European poetry that preceded it. The modern confessional poet is in the same position as the "jazz man," standing alone but revealing himself in every word or note, being fully in the "now," and aware of the multiple connotations and musicality of every phrase. For example, the poem "Belle Isle, 1949" here portrays moments in a youthful love attraction, a frequent theme of jazz standards. The pair goes for a swim, and the whole world, including its dark side, opens up to them.

The detritus at the edge of a city appears repeatedly in Levine's work, but here he endows it with a stark beauty, the "ugly beauty" (the title, by the way of a tune by Thelonious Monk) that jazz redeems with its syncopated rhythm and its blues inflections. Levine's use of vowel sounds resembles the way Louis Armstrong, Ben Webster, Miles Davis, and free jazz trombonist Roswell Rudd varied their timbres and sonorities to convey emotions similar to speech. The situations ("ran down," "baptizing ourselves," "going under," "rising through the layers of darkness") are like the key components of jazz phrasing: pauses, rhythmic shifts, and modulations (a snapshot of it being Billie Holiday's pause, change of tempo, and percussive ending when she sings "Good morning, heartache: sit down!"). These speech-like features lend poignant meaning and rhythmic variation to many jazz songs and improvisations. When Levine wrote his poetry, he built in those "changes," and when he reads them, you can really hear it.

Levine captures the very essence of jazz expression in the poem "The Simple Truth," which describes what many musicians also strive for:

Some things
you know all your life. They are so simple and true
they must be said without elegance, meter and rhyme,
they must be laid on the table beside the salt shaker,
the glass of water, the absence of light gathering
in the shadows of picture frames, they must be
naked and alone, they must stand for themselves.

Armstrong and Ornette Coleman might have said something similar regarding their music. After a curious diversion about a woman selling vegetables from a cart, the poem ends on an existential note about two friends on self- destructive paths:

My friend Henri and I arrived at this together in 1965
before I went away, before he began to kill himself,
and the two of us to betray our love. Can you taste
what I'm saying?

The two friends could have been Charlie Parker and Bud Powell. But they were not; they were just two nobodies lost in the heartland.

This album achieves an exquisite blend of jazz music and the spoken word. The poet reads to the musicians a universal message, and they really hear and respond to the words, their meaning, rhythm, and sonority. Sadly, Levine has left this mortal coil. It will likely take a long time before someone does it this well again. Meanwhile, musicians could benefit from listening to this album for what it can tell them about the inner core of their music. As Charlie Parker said, "If you haven't lived it, it won't come out of your horn." Levine, Boone and the group show us by example a little of what we go through in our lives and its intimate connection to the creative process of jazz.

Let Me Begin Again; An Ordinary Morning; The Simple Truth; They Feed They Lion; To Cipriano, In the Wind; The Poem Circling Hamtramck, MI, All Night, In Search of You; Belle Isle, 1949; Yakov; Snow; Godspell; The Helmet; The Simple Truth; The Conductor of Nothing; South; Saturday Sweeping; Blood; When the Shift Was Over; Godspell.