By Glenn Astarita
January 21, 2019
Sign in to view read count 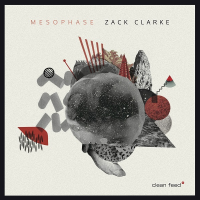 The album press pitch states that, "Mesophase is a term used in physics describing a state of matter that is neither liquid nor solid, sharing properties of both while defining a state unique unto itself." And for New York-based pianist, electronics ace Zack Clarke's second release as a leader for Clean Feed, the Mesophase correlation may allude to the largely unclassifiable music executed on this distinctive and persuasive effort that adjoins chamber, jazz, free-form and experimental mediums.

At times Clarke's brainchild embeds a micro third stream aspect into soundscapes sprinkled with electronics effects, a mini piano recital, stoic cello lines and succinct melodic content in concert with generous doses of improvisation. The pianist's EFX processes summon imagery of nature on "Curtain" along with Chris Irvine's sawing cello parts and Charlotte Greve's wistful flute passages that sway into a rather perplexing ballad. And many of these works flow atop asymmetrical cadences and malleable currents via the pianist's discrete ostinato progressions and mildly chaotic electronics soundscapes that do not overpower the soloists' theme-building efforts.

"Infiltration" fuses a macabre vibe due to fizzing EFX and Irvines' shadowy statements; whereas, "Tilted" is designed with the Clarke's cyclical piano motifs and more electronics that elicit imagery of a dark shroud hovering atop the music, amped by Greve's searching sax lines. While "Reticence" spurs memories of pianist Keith Jarrett's 1970s work with drummer Paul Motian amid swooshing pulses and animated buildups. Nonetheless, each piece contains different characteristics from a compositional viewpoint. "Bridge" features the leader's impassioned and sullen piano voicings followed by cacophonous EFX and oddball alien soundscapes. No doubt, Clarke's prismatic creative streaks and multifaceted regimen proposes a host of captivating aspects to coincide with the implications set forth by the album title. He possesses an arsenal of ultramodern concepts and is most certainly one to watch.