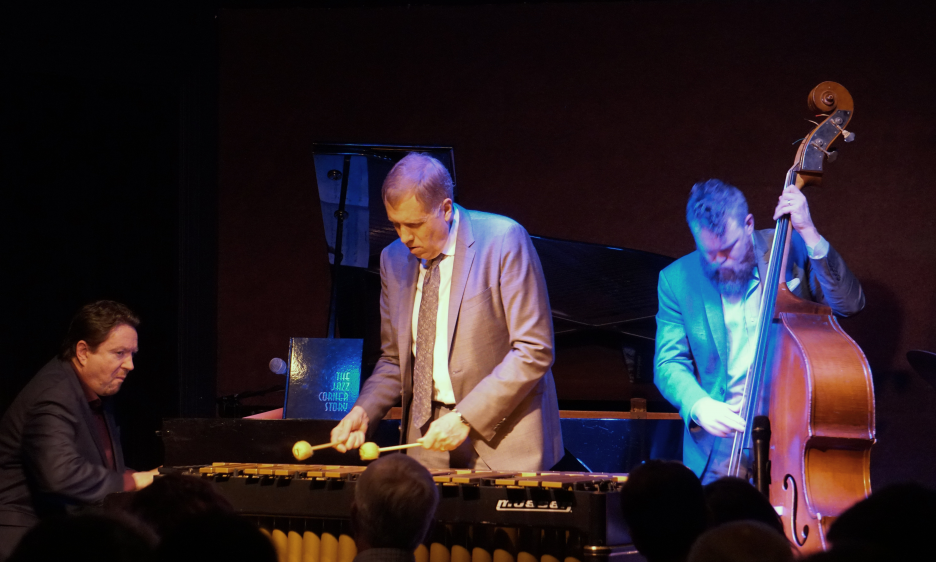 Whenever pianist Kevin Bales comes in from Atlanta to play The Jazz Corner he brings with him a great band and an inventive theme. Whether it's a centennial celebration of the blues or the music of Fred Rogers he never fails to find a sound to vary his presentation and stretch his own tremendous skill. On his most recent visit, Bales was joined by master vibraphonist Chuck Redd with Billy Thornton on bass and Robert Boone, who is drummer for the Count Basie Band.

At the break, Redd declared the house Musser vibes to be of exceptional quality, he remembered them from an earlier visit some four years ago. His name was on the bucket list which the late Bob Masteller, founder of The Jazz Corner, had drawn up before opening the club. Masteller himself played horns and vibraphone and asked Redd to play for him soon after the club opened. That was twenty years ago now. Back on stage, Bales, who actually did play one of the very first gigs performed at the club, hunched over the Yamaha piano keys with the tall figure of Redd beside him. The irrepressible Thornton was center stage with his bass and grand beard. Off to the right was Boone who drummed with big band attack, mollified by sensitive work in the quieter pieces. With only the sound check as rehearsal they played as tight as any band, nodding imperceptibly to switch soloist. In the loud passages it was hard to believe that a quartet could create such a volume of sound. However, there were quiet moments, too. The brushes swept across the drums for a softly swinging version of "Moonlight in Vermont." Enthralling everyone, the piano became a foil to the haunting quality of the vibraphone sound.

The first set featured a composition by Redd himself, dedicated to his charming wife who was in the audience. The piece was entitled "A groove for Gail." In the next piece Thornton opened, picking out the melody while Bales walked the bass line at the lower end of the piano for a blues version of "Frankie and Johnny." It's a 1904 song which gave rise to a number of films of that name or same tragic story line. The song depicts a love triangle which ends in a crime of passion shooting, a disastrous murder. Piano and vibes each played eight measures back and forth against the drums, keeping the excitement level high above the story line. After a spirited bass solo, the pin had to be reset because Thornton had played his instrument into the ground with overwhelming energy. The blues stayed hanging in the air waiting for the following tune which was Billy Strayhorn and Duke Ellington's "The Intimacy of the Blues," a deep exploration of those blues chords which continue to sustain a world-wide industry after more than a century.

Antonio Carlos Jobim's "Triste" (translated from Portuguese as Sad ) developed into a therapeutic musical antidote to melancholy, expressing optimism in the face of adversity with the unsung words "Sad is to live in solitude...Dreamer awake, wake up and see."

"Taking a chance on Love" was a here-we-go-again version, which Bales continues to review and reconstruct from the original 1940 number in collaboration with Australian bassist and vocalist Nicki Parrott. They are both fellows at the Hilton Head Jazz Camp where they teach aspiring young musicians from around the United States every summer. At the break, one of the camp students boldly asked Professor Bales if he might sit in. The student was trumpeter Trent Patten who played a very passable version of "Freddie Freeloader" from the classic Miles Davis album Kind of Blue (Columbia, 1959) while Redd played drums with Thornton on bass. At one point, Bales was singing a suggested counterpoint line for the trumpet to play during the bass solo, which Patten picked up. A brave young man can now truthfully say he once played with some of the great musicians of our time. It's a rare thing to find top musicians who have the patience and technique to enjoy teaching.

Hoagy Carmichael was reputedly inspired to write the next tune while searching for Bix Beiderbecke, who had fallen asleep in an Iowa cornfield. It was the soaring, timeless melody "Skylark" to which the lyrics were later added by Johnny Mercer. Redd reached down to the control box on the vibraphone to raise the heart rate of the butterflies spinning above the pipes. That increased the echoing vibrato on the sustain pedal to mellow the mood. For the last few measures, Thornton bowed them out while Boone delicately drew just the point of a stick across the crash cymbal.

In memory of the late bassist Ben Tucker, one of Bales' guiding mentors, the band chose "Midnight in the Garden of Good and Evil." The music was inspired by a classic tale and film about life in Savannah with its famously haunted cemetery. Ben Tucker became the club owner of Hard Hearted Hannah's in Savannah. He had a record label, he played, wrote and composed the Mel Torme hit "Comin' Home Baby." Ben Tucker was the first African American to own a radio station. A painting of him hangs on the Jazz Corner wall; the stocky figure of a kindly man and dedicated golfer, playing his well-worn bass with his head up high and a bristle of mustache across his good face.

Bales was full of praise for pianist Monty Alexander, whom he described as a big spirit to look out for when he visits The Jazz Corner in March. They played Alexander's composition "Reggae-Later" which was pronounced Regulator, even though it is not a reggae rhythm and was played not later, but right then and there. Boone opened with a long, crisp drum solo followed by Bales playing the piano muted inside the case by one of his hands on the strings.

It's hard to pick a favorite from an evening of excellence but music by George and lyrics by Ira Gershwin are always a solid choice. They played "Embraceable You" from 1928, a year after the vibraphone was first developed. The sound, style and era were a perfect fit.

Vibraphonists Tony Miceli, David Freeman, Joe Locke and Warren Wolf were also on Hilton Head Island that same weekend and dropped by to hear Redd play. They were in town for Jazz Vibes Showcase, produced by radio host Gloria Krolak the next day at the Arts Center. Redd was invited to the stage for the last number and they played a vibraphone anthem, Milt Jackson's "Bag's Groove."

Redd's talent is intense, he is one of the grand gentlemen of jazz with nothing left to prove. He clearly loves the music and makes it appear easy to play at his pace while still placing every note with precision. During someone's solo, he can aim one single loud strike of the mallet in exactly the right spot as a highlight, and make everyone on stage smile. Redd has done it all in a long career, played all around the world from Carnegie Hall and back to the White House. Clubs, festivals, even cruises have featured his music and he has played with all the great names.

When it's done right, live jazz generates a tide of infectious enthusiasm which ebbs and flows between audience and players. Fast runs tripped off fingers and strings, sticks and mallets and out into the audience, creating shared excitement which ended in an ovation.