The Billy Hart Quartet at the 21c Museum Hotel 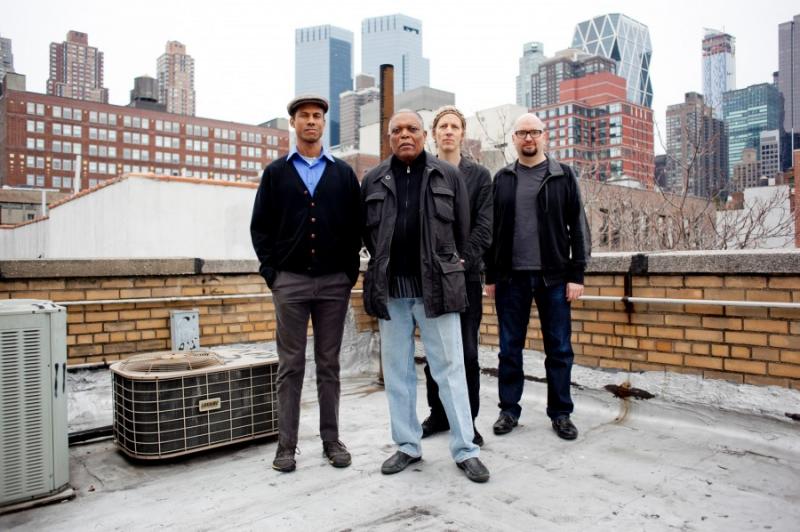 Nearing the end of their first set at the 21c Museum Hotel in downtown Durham, Billy Hart stepped out from behind his set and looked out into the crowd. When he plays the drums, Hart's face often looks strained and stressed, as if every rush across the toms and intricate series of cymbal play comes from some deep place and must be wrought out with great energy and care. Taking a breath, he paused, smiled, and said, "On some enchanted evening, you will meet a strange band."

As the band—with Ethan Iverson, Mark Turner, and Ben Street—delved into a dense, richly colored take on the Rodgers and Hammerstein classic, Hart's words rang sweetly true. Iverson laid out the melody with a deft touch, but as Hart entered with cymbal stabs and Turner and Street followed, what ensued was a take that was both true to the original and delightfully different.

Although this was one of only two standards of the evening, the rich melodic interplay between Iverson and Turner and the intricate, swelling sense of motion provided by Street and Hart was characteristic of what has come to be expected of this fine group since its formation in the early 2000s. Their two sets in Durham drew mostly from their two albums on ECM Records—All Our Reasons (2012) and One is the Other (2014)—and demonstrated the strong songwriting skills of Hart, Iverson, and Turner alike. Similar to their method on "Some Enchanted Evening," they had the same loose but faithful approach to their own work. "Song for Balkis," for example, was defined by the rich, deeply emotive playing of Turner, who maintained the beautiful rising and falling line of the melody while building off of the high energy and dynamism of Hart's playing, in contrast to the slightly more subdued original.

One highlight of the night was the Ethan Iverson-penned "Aviation," which, true to its name, consisted of Turner and Iverson imperceptibly shifting around a bebop-inflected melody and a relentless push from Street and Hart in the rhythm section. A similarly intense approach was taken with the Sonny Rollins-inspired "Nigeria," composed by Turner. As Turner delicately ran around the mid and higher ranges, demonstrating ecstatic playing that at times invoked late John Coltrane as well as Rollins, it was not difficult to see why he has come to be seen as one of the most vital and powerful saxophone players in recent years.

Any group comprised of Iverson, Turner, or Street alone would be worthy of attention, but throughout the night, it was Hart's deft and powerful approach to the drums and how he brought the other voices on stage together that propelled the energy and intensity of the group's performance. Inquisitive is not often a word used in relation to drummers, particularly in the context of a traditional quartet, but it was the different turns that Hart took—building up longer swirls of sound on the cymbals, only to turn to a traditional backbeat groove and then an intense battery on the toms—that proved to be one of the most entrancing aspects of the night. Although Hart's fast-paced playing, particularly when he swiftly moves around the cymbals, is evocative of the classic sound of Tony Williams, his sense of melody and the range of colors and textures he was able to create over the band's 12 songs was thoroughly rewarding and melded beautifully with the driving bass lines and feel of Street's playing as well as the leading lines of Iverson and Turner.

Indeed, the most satisfying moments of these sets was when, after magnificent, wandering solos and take on the melody from Iverson and Turner, Street and Hart would charge right back in, completely changing the tone and taking it to some strangely beautiful, mysterious other place. With Street moving swiftly and intricately up and down the bass, Hart would similarly develop an ocean of sound from his four cymbals over which the high-register playing of Turner and a methodical line from Iverson would simply seem to float.

Although his long career has taken him from playing behind Shirley Horn to Herbie Hancock's Mwandishi band—including stops with Wes Montgomery, McCoy Tyner, and Miles Davis—this performance in Durham confirmed that Hart's decade-plus collaboration with what were clearly close friends might be his most enduring and satisfying work to date.