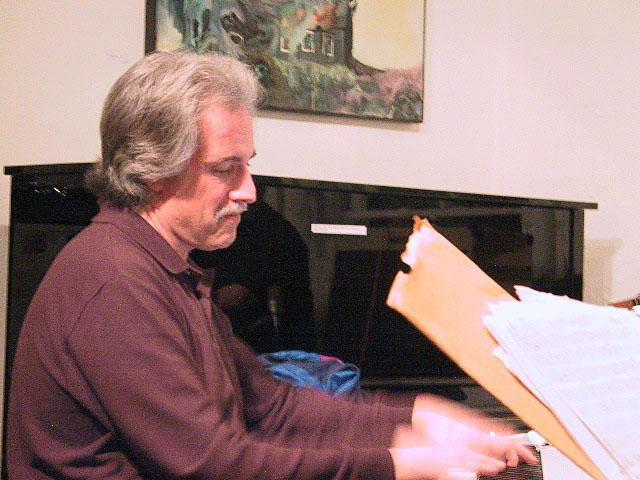 Teachers and/or influences?
I went through a lot of teachers, but my favorites were Fred and Shirley Clements when I was growing up in my home town, and Bruce Thomas and John Arcaro at Berklee. I also have fond memories of Berklee classes with George Garzone, Ed Tomassi, Herman Johnson, and Paul Schmelling. Best jazz pedagogy I ever witnessed? An afternoon spent (as a guest) in the studio of drummer Lenny Nelson}, an inspiration that's lasted a lifetime.

For electric keyboards, I loved all the Moogers: Keith Emerson, Jan Hammer, Wendy Carlos. For pop, I'm a child of the sixties: The Beatles, Brian Wilson, Eric Clapton, Bob Dylan. In classical music, Bach and Prokofiev have been two particular favorites. I also enjoy different forms of traditional music from India, East Asia, and the Middle East.

I knew I wanted to be a musician when...
I was always listening to and trying to play music when I was a kid, but thought I might want to be an artist. Then, I remember reading a letter in a magazine from someone who was a music major in college, and suddenly had this "I could do that!" moment.

Your sound and approach to music:
I like music that has a good balance of the basic elements—melody, harmony, rhythm. I think that's what drew me to jazz. But, to be fair, there's a lot of great music that doesn't strike me as being particularly well balanced in that way.

Your teaching approach:
I try to be the teacher I always wanted, in terms of both content and approach. I've been very fortunate to encounter some kindred spirits in the classroom.

Your dream band:
Well, you know, I've had wonderful experiences playing with students, and miserable experiences playing with celebrities. As much of a thrill as it would be to play with any of my favorite musicians, I guess experience has kind of disabused me of the "dream band" notion. At this point, I would say I find it useful to evaluate a band more as a collection of relationships than as a collection of individuals. How it looks on paper don't count.

Favorite venue:
Playing Royal Festival Hall in London with Ornette a couple of times—for such a big, auspicious place, I remember it having kind of a warm vibe. As a listener, I remember seeing Jack DeJohnette years ago at the Famous Ballroom in Baltimore. People were sitting at picnic tables eating fried chicken, and ladies from the neighborhood were selling pies in the back. I think it's admirable to aspire toward certain standards of status and respect in the presentation of this music, but as an expression of integration with the community, that worked for me.

Your favorite recording in your discography and why?
Only two released as a leader: Shock Exchange and The Eternal Hang. I choose both.

The first Jazz album I bought was:
Heh. Mahavishnu Orchestra, The Inner Mounting Flame. For extra credit: first album I asked for as a child was Allan Sherman's My Son, The Nut.

What do you think is the most important thing you are contributing musically?
There's something about being inspired by someone else's work that invites a reciprocal response. If I can try to "pay those inspirations forward," I think that's pretty important. Also, integrating acoustic and electronic instruments is a special interest of mine. But ultimate "importance" would have to be ascribed by the listener.

CDs you are listening to now:
That big Mosaic box of early Ellington.

What are some of the essential requirements to keep jazz alive and growing?
I'm always encouraged by how jazz seems to spontaneously diversify its gene pool by bringing in influences from other styles and cultures. Marketers and some historians might complain, but it's a sign there's still a pulse there.

By Day:
I work for a book publisher, and teach.