Keyboardist and composer Dave Bryant has many friends. Many who also happen to be notable local, national, and international jazz artists, who have collaborated with Cambridge-based Bryant on different projects over a span of decades. Those connections began to grow in the early 1980's, within a year after Bryant completed his formal undergrad studies at Berklee. ... 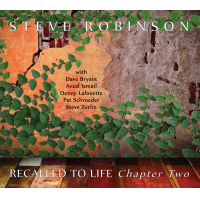 The Garden of Equilibria

Label: Self Produced
Released: 2016
Track listing: Four Ways In; Solo No. 2; The Garden of Equilibria; Check Your Lid; Solo No. 1; Salutations; Secret Handshake.

World beat purveyor Lawson Rollins boosted by in-store play for his newly released album; the virtuoso guitarist to be profiled in Guitar Player magazine. San Francisco, CA: The guitar-guided world music excursions that you hear this month in Barnes & Noble stores throughout the United States come from the recently released Traveler, the critically-hailed fifth album ...

Lawson Rollins: Have Guitar, Will Travel

Lawson Rollins is a virtuosic tour guide on a musical exploration around the globe on his fifth album, Traveler, which will be released February 17. San Francisco, CA: Many people travel from an encapsulated distance, staying at posh brand name hotels and dining under the golden arches while others prefer to explore by blending amongst the ...