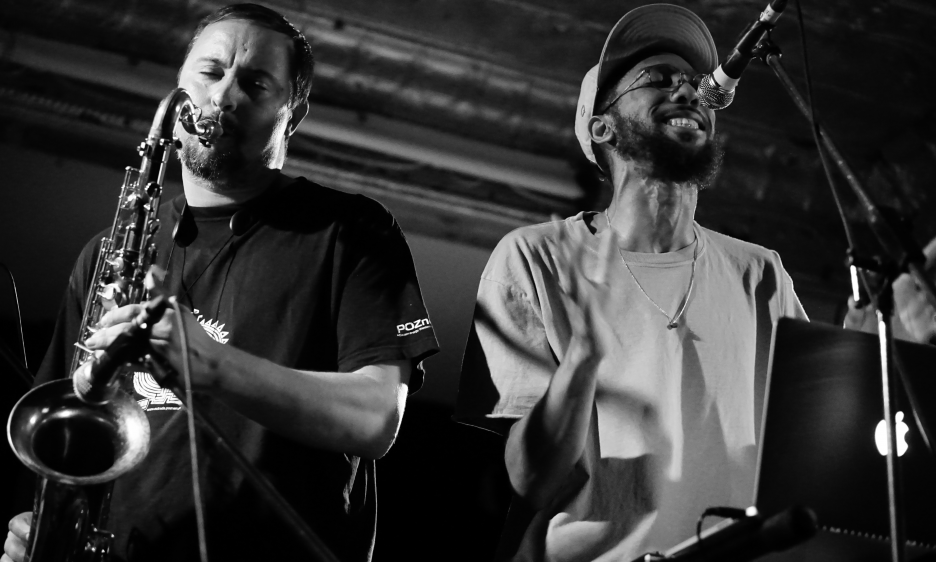 The Casa del Popolo and Sala Rossa, the hub of the annual June celebration of avant music known as the Suoni Per Il Popolo, sit across from one another on Saint Laurent Boulevard just below the major intersection of Saint Joseph. Likewise, for its three weeks, the the Suoni is an intersection for many of the most interesting musicians in the world. Musicians come to town, hang out for a few days, meet old friends and new, and of course, play some music.

Typically, the program for each evening consists of a set by each of two ensembles. Musicians and members of the audience mingle before, between, and after each set. Connections are made, friendships are strengthened, drinks and cigarettes are consumed. And everyone talks about what a great city Montreal is. They say this because it's June, not February.

Montreal is two different cities: one in the winter, and one in the summer. Montreal never feels more like the perfect hybrid North American/European city than in the summer—everyone out on the streets, a multicoloured laissez-faire parade that maintains a wacky decorum. The Suoni is part of that, a medium-sized and ambitious festival, run on a human scale, as befits the music, and the city.

This year's lineup of free jazz and improvised music was among the best in the 18 years of the Suoni, a blessing after what seemed like an endless winter.

My trip through the festival began at the Sala Rossa, on June 4, when the trio of Susan Alcorn, Joe McPhee, Ken Vandermark, presented a set of airy, delicate textures in which McPhee and Vandermark, uncharacteristically for him in my experience, employed long vibratoless tones that wound above and within, variously, of Alcorn's shimmering vibrations on her pedal steel guitar. Slow blues and romantic microtonality.

The Wednesday, June 6 program at the Sala featured Chicagoans Dave Rempis and Tim Daisy along with Ghanaian balaphone player SK Kakraba. The opening duo set by Rempis and Daisy was underpinned by the heavy African influence in Daisy's drumming, which focused on the toms. Kakraba followed with a set on balaphone, of a type particular to his own Ghanaian tribe, which has fourteen keys and a type of metal vibrator that gives the instrument a certain twang. Rempis and Daisy then joined Kakraba for 30-45 minutes of soulful grooving. My takeaway from the evening was the inventiveness and subtlety of Daisy's drumming, the incisive lines from Rempis on tenor, and the exuberance of SK Kakraba.

The next evening featured the duo of Kahil El'Zabar and David Murray, who were preceded by Castor et Compagnie, the latest project by Montreal's Joane Hetu, the grand dame of the Ambiances Magnetiques family. The set was something of a stripped-down quintet version of Ensemble Supermusique, with Jean Derome, Pierre Tanguay, and Diane Labrosse, in which Hetu's usual musique actuelle approach to old and new compositions added a dimension of funkiness not normally heard from these musicians, while employing the small instruments and poetic word and sound play that one has come to expect from her.

El'Zabar and Murray's set was an intimate, happy affair, charming and beautiful. The two appeared a bit tired, which probably helped, as they moved slowly and deliberately through the music, which was imbued with a deep blues feeling. Murray even threw in a version of "Summertime," which, in his hands, did not sound hokey at all.

For many years, Casa majordomo Mauro Pezzente had wanted to bring Milford Graves to the Suoni. This year, Pezzente finally got his man, as Graves appeared in duo with longtime festival friend William Parker at the Sala Rossa on Sunday, June 10. As one might imagine, this was no ordinary bass and drum duo, given Graves' idiosyncratic approach to the trap set and his singing, a kind of chanting The duo worked their way through a half-dozen improvisations, Parker switching from bass to gimbri back to bass and finished up by playing taragato, in a charming, amusing, and oh-so-groovy performance. Two old masters, two old friends, showing that they can still teach us a few things.

Oftentimes, a festival lineup looks good on paper but disappoints. Such was not the case during the second week of the festival, with a remarkable series of consecutive performances that began with the second set on Monday, June 11 at the Casa del Popolo, when the Party Knullers, a duo comprised of cellist Fred Lonberg-Holm and drummer Stale Liavik Solberg were joined by the remarkable young trumpeter Jaimie Branch. Lonberg-Holm and Solberg have a deep, intuitive connection, and their music is full of twists, turns, and surprises that all sound natural and inevitable, while Branch provided fire with her delicious strings of high notes walking the improvisational tightrope.

The next evening was a high energy affair, starting with a set of burning free jazz by a quartet comprised of Portuguese musicians Ernesto Rodrigues (viola) and Luis Lopes (guitar) with Montreal residents Karoline Leblanc (piano) and Paulo J. Ferreria Lopes (drums), a native of Portugal who has resided in Montreal for thirty years. Leblance is a classically trained musician who comes at improvised music through Cecil Taylor, whose influence was evident in her powerful playing. Rodrigues, the force behind the Creative Sources label, is an extremely flexible musician, having played with literally hundreds of improvising musicians during his career. So, while the viola might not seem to fit in such a context, Rodrigues plays with a subtle strength, lending the performance a balance between power and delicacy.

That set was followed by an energetic set by the Texas explosion known as the Young Mothers, a sextet led by bassist Ingebrikt Haker-Flaten. Anchored by the drumming of Frank Rosaly and Stefan Gonzales, who mainly played vibes, the front line of saxophonist Jason Jackson, trumpeter Jawwaad Taylor, who also does vocals, and guitarist Jonathan F. Horne laid down some serious funk informed by rock, hip-hop, and free jazz, playing pieces from their album, Morose. The Young Mothers were joined by Jamie Branch on their last piece, which was like adding gas to a vigorous blaze.

Wednesday night's double bill of Sylvie Courvoisier and Mark Feldman, followed by the trio of Mette Rasmussen, Craig Taborn, and Ches Smith, lived up to all expectations. Courvoisier and Feldman in duo are money each and every time out, as they played a series of intricate compositions (mainly by Courvoisier) that demanded a high degree of synchronicity from the duo. Courvoisier was a force, both inside the piano and on the keyboard, while Feldman's sure sense of dynamics and tone on violin complemented Courvoisier's fire. Rasmussen, Taborn, and Smith were like hot ice, as their music (I'm sure these were compositions, but no titles were announced) moved from quiet passages in which one or the other of the trio leads to hard-blowing ensemble sections, Rasmussen's sinuous alto sax complemented by the spikiness of Taborn's playing and Smith's interjections.

Ted Crosby's Revival Ensemble, featuring musicians from Montreal and his base of Vancouver, took on Duke Ellington's Far East Suite with aplomb at La Vitrola (a third venue just down the street from the Casa and the Sala) on Thursday, the 7th. Drummer Milli Hong powered the orchestra, which featured three trumpets, three reeds, trombone, and violin in the front line, through their 45-minute Ellingtonian excursion with crisp, precise, and powerful drumming throughout. It was the first time I had seen her, and I was pleased to hear that she is moving to Montreal from the west coast. The front-line playing was full of colour and just loose enough to maintain a gorgeous tension.

Saturday evening at the Casa was a double bill of Toronto saxophonist Brodie West's eight-piece Eucalyptus, who groove in an area somewhere between West Africa and Saturn, and the superb trio of Nicole Mitchell, Tomeka Reid, and Mike Reed. While Eucalyptus jammed it loose and easy, the headliners played it tight and intricate. The flute is the one instrument that I am most suspicious of (i.e., I simply don't like the sound of the instrument), but there is no such fear when Nicole Mitchell is doing the deed. On the other hand, the cello is one of my favourite instruments, and Tomeka Reid was simply magnificent, eschewing her bow for the most part, plucking highly intricate lines that wove with Mitchell, whose forceful playing was inflected with subtle tonal variations. Mike Reed's drumming had the proper touch to both complement Mitchell and Reid and push the music forward insistently. One of the best sets of a festival full of strong performances.

The free jazz and improvised music part of the festival concluded on Monday, June 18th at La Vitrola with Monicker, the trio of percussionist extraordinaire Roger Turner, trombonist Scott Thompson, and guitarist Arthur Bull followed by le GGRIL, bassist Eric Normand's large improvising ensemble from Rimouski, Quebec. Turner was brilliant, the musical ideas seeming to simply fly out of the man, offering a stern challenge to Thompson and Bull, who responded with lines that were more complementary than directly confrontational. Le GGRIL is an interesting, community-based project that does not boast any musicians of the calibre of Turner, for example, but who instead rely on communication and heart, shifting colours in conducted improvisations. Given the ethic of Le GGRIL, this was a fitting conclusion to a festival that speaks to the importance of community.

At the Milford Graves/William Parker show, I asked Mauro Pezzente if he was having fun yet. "I started having fun eighteen years ago," he grinned as he moved on by.

But it's way more than fun for Pezzente and his partner Kiva Stimac and the whole crew of the Suoni Per Il Popolo, from the unflappable and always kind and generous Peter Burton, who puts the whole thing together, to the people taking tickets and selling drinks. It's hard work, but it's done in service of the idea that we need, more than ever, spaces like the Casa del Popolo and the Sala Rossa where people can meet and exchange stories and ideas, and be nourished by the unstoppable creativity of artists from all over the world—or from just down the street.