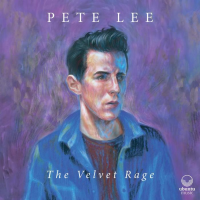 The title of pianist and composer Pete Lee's debut album derives from Alan Downs's book The Velvet Rage: Overcoming the Pain of Growing Up Gay in a Straight Man's World. Perhaps by way of explanation, Lee has added a short word on the inside cover of the CD digipak; "I mean for this album to be the soundtrack to my personal celebration; accepting and learning to understand my place on Earth, enjoying this very moment, and the next, and the next." He concludes this line with the pithy recommendation to "Listen out for the Velvet and the Rage."

The music presented here, however, speaks volumes and eloquently too. The robust electric fusion of the opener, "Writer's Block" belies Lee's ability to compose exquisitely delicate string arrangements such as the title track, sumptuously embellished by The Amika Strings. By sharp contrast, "Edinburgh" is a positive powerhouse of energy segueing seamlessly into "The Mirror Stage" where the downshift in pace is underpinned by a solid rhythmic pulse propelled by Huw Foster's bass guitar, Ali Thynne's drums and Lee's electric piano. Bookended by strings, "Dependency" is a showcase for Josh Arcoleo's fine tenor work. The album concludes with "Stavanger" which slowly builds from a pastoral setting to a crescendo, finally subsiding with delicate strings and piano and featuring Simmy Singh on violin.

The Velvet Rage is unequivocally excellent, sporting twists and turns in mood and sensitivity. The strings are utilised with discretion and don't impinge on the jazz rock tracks which is a good thing. Lee clearly appreciates and understands the importance of context. Lee's keyboard virtuosity is matched by his compositional skills and this album is testament to that.