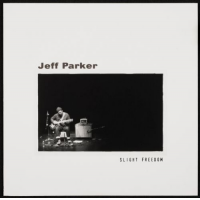 One is tempted to think of Jeff Parker as the first guitar anti-hero. He's a subtle player, first and foremost, not given to showy pyrotechnics and rapid-fire flights of plectral fancy. His chameleonic, almost self-effacing, presence on recordings by Tortoise, Joey DeFrancesco, Isotope 217, Fred Anderson, the Brian Blade Fellowship, Peter Erskine, Nicole Mitchell, Yo La Tengo, Hamid Drake, Joshua Redman, Scott Amendola, George Lewis and countless others is startling for its sheer stylistic diversity. Yet, Parker, unlike pretty much any other guitarist—or musician for that matter—always fits in. His playing, always deeply soulful, is more than just apropos; it belongs. Always somewhat terse and restrained, the sheer melodious strength of Parker's improvisations and accompaniments makes one wonder who's adapting to whom. In any setting, his playing has a sort of clarity that illuminates the music from within. It's the sort of musicianship that comes with a deep understanding that music-making is necessarily a collaborative group activity. Even Parker's albums as a leader—while quite obviously forged from his own unique musical vision—have an even-handed, conversational feel to them.

It's precisely these properties that make Parker's first solo recording, Slight Freedom, so eagerly anticipated. The quintessential group player is finally out on his own. Parker does not let us down; you knew he wouldn't, though. Slight Freedom is a total delight from start to finish. Craftily, he forms an ensemble of one via the subtle use of found sounds, delays, carefully-chosen samples, a few distinct effects, and other manipulations in real time. One gets the sense that sound artists such as Brian Eno, John Cage, J Dilla, and frequent collaborator Rob Mazurek (who, like Parker, maintains an active parallel career in the conventional jazz world) are just as important to his artistic development as B.B. King, James Blood Ulmer, or Derek Bailey. And one can hear all of this on Slight Freedom.

Buoyed by rhythmic-motorik amplified tapping, the title track is hypnotic and minimalist, though its spine is this gritty, nocturnal blues riff. The riff fades as eerily harmonized drones gather and occupy the foreground. Parker's shimmering, slowly unfolding improv here seems allied to the work of European experimentalists such as Hans-Joachim Roedelius. An urban environment—the brief yelp of a police siren, traffic sounds, the beeping of a truck backing up—impart an oddball innocence, and jauntily contrasting rhythms, to Parker's gently percolating, samba-informed cover of Frank Ocean's "Super Rich Kids." Penned by drummer / vibraphonist Chad Taylor, another frequent collaborator, "Mainz" also appears on Parker's trio album, Bright Light in Winter (Delmark Records, 2012). Strongly rooted in the jazz lineage, "Mainz" is right in Parker's wheelhouse; lyrical, mournful, melodic, with interesting harmonies and an eminently grok- able ostinato that's perfect for sampling and manipulation. The piece dissolves into a blinding sunburst of drones and sustained, slightly distorted tones. The presence of "Lush Life" here is strangely unsurprising. Underpinned by what sounds like sampled feedback, Parker plays Billy Strayhorn's timeless ballad faithfully but with the tremolo turned way up, giving it a dreamlike aquatic feel. Throughout this rather brief album, the one constant is that all of Parker's choices are the right ones.

It's worth mentioning that the LP version of Slight Freedom is a deluxe pressing on super-heavy audiophile grade vinyl. Eremite Records has clearly spared no expense to bring this project to fruition. Aesthetically pleasing in every way, Slight Freedom is one of the year's more remarkable recordings.