By Mark Corroto
December 9, 2016
Sign in to view read count
How prophetic is it that we now live in the second century of Sun Ra's earthly existence? Born (maybe) in Alabama 1914, Herman Poole Blount became the pianist, arranger, band leader, poet, and can we say prophet(?) we know as Sun Ra. He was both a man of his times and a messenger from the space. I say he was maybe born in 1914, because the person known as Sonny Blount claimed to have been abducted by space aliens in 1936 and transported to Saturn only to return with his message for Earth. He communicated this message through his poetry written in the English language, but more importantly through his music which is a universal language. We say he is of his time, because this musical language originated in the music of Fletcher Henderson and Duke Ellington, later he dabbled in do-wop, R&B, bebop, and of course free jazz. So much of Sun Ra's time on earth, he left us in 1993, was spent exploring new sounds. He was perhaps the first to incorporate electronic keyboards into jazz. His Arkestra, clothed in elaborate costume, contained first class musicians, like John Gilmore, Julian Priester, Marshall Allen, Tani Tabal, and Pat Patrick, to name just a few. Sun Ra's influence can be heard in the music of George Clinton and Funkadelic, Sonic Youth, Fishbone, NRBQ, and countless free jazz musicians.

The easiest and maybe quickest entry point into Sun Ra's music might be the vocal performances. The disc opens with the ceremonial identification of Ra as "the living myth" and maybe an angel from outer space. All this pomp and grandeur preaches the "children of the sun" are lost and in need to reclaim their heavenly rights. Listeners can dip a toe into the his afro-futuristic immeasurable equations as he reads his poetry over electric keyboards and percussion on "The Antique Blacks," from 1974, which explodes with an electric-Miles Davis groove. His circus of sound though is a most serious endeavor. Ra is teaching the world about the origins of the 'black man' on "Moorish Nights." Signing in harmony with June Tyson, he drawls on mythology to conjure the Moors rise from the Pacific ocean.

Although an oracle from Saturn, Ra was also of his time. His cover of Thelonious Monk's "'Round Midnight" with Hattie Randolph's vocals is lavishly arranged in all the splendor of a late-1950s jazz orchestra. Ra's piano stays within a traditionalist mode. Same for his swinging take on Nat King Cole's "Sometimes I'm Happy" and the Ella Fitzgerald vehicle "Back In Your Own Back Yard." The hipness is juxtaposed by cautionary tale of "Nuclear War," a composition hipsters might have first heard on Yo La Tengo's cover from 2002. Ra's early take on spoken hip-hop warns us that "If they push that button, Yo ass gotta go!" The Arkestra's music has filtered down to punk bands from devotee Thurston Moore.Listening to the cartoon chant of "The Forest Of No Return" one could easily be mistaken for the madcap music of Fishbone. The only missing track here is "Pink Elephants On Parade" from the Hal Willner Disney tribute record Stay Awake: (A&M, 1988).

But this is Arkestra music, and we an "Enlightment" invitation to Ra's space world with it's starry vibrations and, well a sort of awakening. He takes us "Walking On The Moon" with the memorial line, "If you wake up now, it won't be too soon" through the cosmos with "Space Is The Place," perhaps the ultimate hypnotic meditation chant.

This release of thirteen tracks, nearly half previously unissued, comes as either a CD or a limited edition, translucent yellow and translucent blue 2LP set.

This Sun Ra concert from New York on April 20, 1991, is being issued for the first time as a 2-CD or limited edition 3-LP collection. This date is significant because it records a concert that took place after Ra had suffered a stroke which may have affected his left hand. Despite this, Ra continued touring after his stroke. After more than fifty years of composing and performing, the great man departed from this planet in 1993. Even after he had taken his leave, his legacy and Earth mission continued.

After 1993, the ensemble was initially under the direction of first saxophonist John Gilmore, who suffered the effects of emphysema and would pass on in 1995, and then Marshall Allen, who is still going strong at 92.

First things first, the sound quality is first rate. Often, Sun Ra devotees are subjected to lower grade recordings. Here the concert was captured for WNYC at the Inter-Media Arts Center in Huntington, on Long Island. The 106 minutes of music are an exultation of the history of Ra. Opening with a full percussion attack, the music relaxes into June Tyson and Michael Ray's vocals on "Sleeping Beauty," with Allen adding some agreeable flute as accompaniment. Ra's piano is then heard opening the locomotion of "Advice to Medics/Friendly Galaxy." Even with just one good hand, he commands attention. Such is the indestructibility of Ra's earthly mission.

Like most late-Arkestra music, there is a mixture of modern free jazz and jazz history freed of kitsch. The Arkestra splashes through the 1930's hit "Hocus Pocus," Ellington's "Prelude To A Kiss," Fletcher Henderson's "Yeah Man" and Woody Herman's "Early Autumn." Anyone that doubts Sun Ra's ability to swing will be convinced with a listen here. The solos from Allen, Gilmore, Ray are seemingly unending. Disc two, which features the second set, contains the better performances by Ra himself. His piano lifts the stage throughout, on both the perfect simplicity of "Cocktails For Two," or the full force of the Arkestra's take on "Carefree." The ensemble is powerful enough to win any battle of the bands this night. 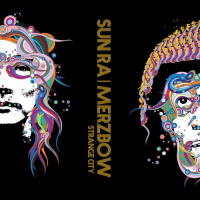 Let's release our imaginations for a spell here. Certainly you can, and probably must, when you listen to the noise (aka Japanoise) of Masami Akito, aka Merzbow. His sound, often a tumult, is as overwhelming in volume as the music of John Cage is in silence. Same can be said for the earthly recordings of Sun Ra, a man not unfamiliar with the cacophonous sounds of free jazz.

Sun Ra, born in 1914, departed Earth in 1993. Some say he returned to his home planet Saturn. Remember, we are using our imaginations here.

These recordings, which are two separate releases, a CD and an LP, share the same name but with feature different music. Both are Merzbow's interpretation and sampling of Ra's releases Strange Strings (Saturn Research), 1967) and Magic City (Saturn Research), 1966), both recorded in 1965.

Now envision the member of the Arkestra blasting off from Merzbow's 2016 studio to be reunited with Ra on Saturn. "Livid Sun Loop," a 32-minute track drops the ensemble on the surface of the giant planet. Our radio transmission back on Earth, this recording, matches the Arkestra's sound with Saturn's 1800km/hr winds. The band is barely heard over Merzbow's onslaught of sound. He delivers a relentless attack, forcing the band to find shelter. The remaining, "Granular Jazz Part 1-4" envisions the next transmissions from some kind of shelter. The noise slackens, but the onslaught continues outside the camp. The music here is less about the Earthly sounds of Sun Ra and more about this new, maybe higher plane Saturn sound. As with all of Sun Ra, some of us earthlings can't appreciate the message. Merzbow fans are better suited to to this communiqué.

The Space Age Is Here To Stay

Tracks: Along Came Ra/The Living Myth; Interplanetary Music No. 1; Back In Your Own Back Yard; Enlightenment; 'Round Midnight; Sometimes I'm Happy; The Antique Blacks; This Song Is Dedicated To Nature's God; 1984; Space Is The Place; The Forest Of No Return; The Truth About Planet Earth; Nuclear War (live); Space Chant (Third Heaven).

Sun Ra And His Arkestra At Inter-Media Arts April 1991