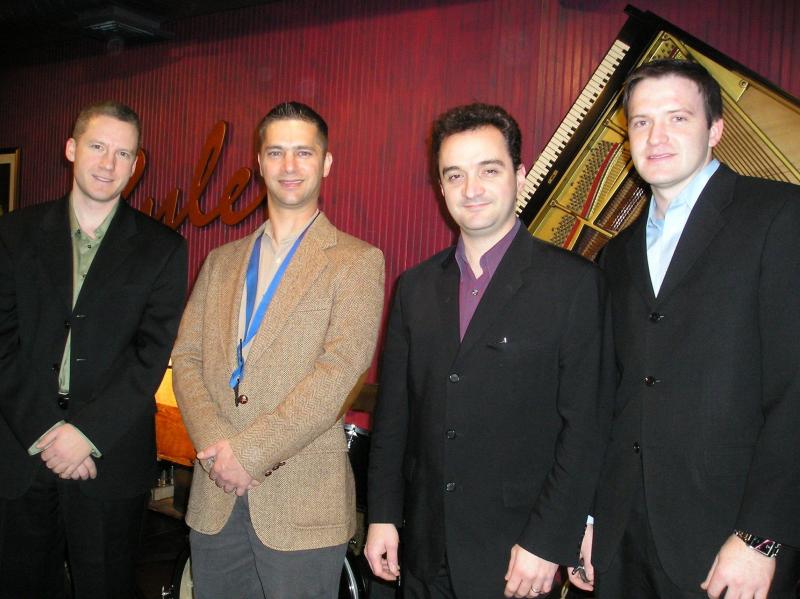 The cold February night, part of a long winter that dropped 60 inches of snow on Boston, didn't prevent a crowd from gathering as Rusty Scott celebrated his release of The Thrill is Gone (CD Baby, 2010). Scott, a Boston area pianist, slid away from the ivories and, for this latest collection of arrangements, chose instead to explore the Hammond B3 organ.

"The organ is great because it opens you up to some different styles," Scott explained. "I try to just play what works on that instrument. The funky stuff works really well. A lot of that crossover stuff works really well on organ, too." In making the transition from piano to organ, Scott cites the time he spent with Mike LeDonne as crucial to his development. "He saved me a lot of time. He saved me about six months time, learning settings and some of the standard stuff."

The set opened with "The CCC," a crisp, straight-ahead contribution by drummer Dave Brophy. The piece began in a trio format, with Scott and Brophy joined by guitarist Ratau Mike Makhalemele. After the opening theme, Mele's sound gently nudged forward—warm and round, the classic tone emitted from a hollow body Heritage. Scott, who has collaborated with Mele intermittently for about 15 years, described Mele as a musician who is "very empathetic, very supportive, but never gets in the way. He really sneaks in there." Throughout the night, Mele worked combinations of gliding notes, meaty riffs, and distinct phrasings in the high, middle, and low ranges of the guitar, demonstrating command of his instrument.

The second selection was "Mean Old Joe," dedicated to bassist Joe McMahon, who Scott has known since his days at Berklee. Laidback and sweaty, the music hinted at Jimmy Smith's sound, and had a greasy, fatback feel. Scott led the piece, working the organ's bass pedals in a steady, driving pace. "The left hand doesn't have enough pop by itself," Scott explained of the Hammond organ, "you have to incorporate the left hand and left foot." Elaborating, he adds "On piano, I have a bassist. On organ I become the bassist. That's one of the things that's challenging about the organ. While you simplify the harmony parts, you have to play all of the things a bassist would do—that's an adjustment and I think it's one of things you have to learn."

The band connected soulfully on "Lover Layne," a work dedicated to Harold Layne, veteran of the Boston jazz scene who has performed with Sonny Stitt, Ben Webster, Eddie "Lockjaw" Davis, Wynton Kelly, Don Patterson and Rahsaan Roland Kirk, among others. As the piece opened, Scott and tenor saxophonist Tim Mayer worked the same riff, explored the melody, and returned in unison. Scott's chord changes took sharp corners as Brophy's light, airy drumming sketched delicate phrasings that created rhythmic patterns of a complex nature. Mayer stepped forward and began to solo, his horn singing with a lyrical quality and the saxophonist's phrasings loud and clear, as he wove through a series of dynamic, well-thought ideas. A horn player who studied linguistics in college, Scott describes Mayer as, "very aural, a very complete musician. He brings it all the time—he has such a great love of music and plays as much stuff as he can."

Going deep-to-well, Scott called Layne to the stage, and a quiet, unassuming man slowly made his way behind the drum kit. Layne settled in, and peered at Scott with a somewhat quizzical expression. "It's a ballad and then swing—you'll know it when you hear it," Scott said, with a smile. In complete contrast to Brophy's light and delicate playing, Layne struck brush to cymbal with a heavy, commanding hand. The band responsively snapped into a ballad, which evolved into Scott's interpretation of a Henry Mancini piece that was used as the theme for the TV series What's Happening.

Scott spoke highly of Layne, explaining that, "He was born in Cambridge [Massachusetts] in 1926. He was playing when he was 10 or 11 years old, and that puts him in the thick of jazz." Layne worked a post office job by day, and played on the local jazz scene by night. "He played gigs around town and was on the scene freelancing with the rest of the musicians" Scott shared, "I've heard recordings of him from back then, and he was fantastic."

Reflecting on the drummer's sound, Scott states "The thing about Harold is, if you listen to modern drummers, they sound great, but there is definitely something that is lost in translation, I think. No matter how hard you try to get it, there is a thing he has in his playing that is very difficult to get these days. He was out paying every night back then. He has a kind of thing, that warm groove, it's a big phat groove, and it's amazing. You play with him and instantly you get this big smile on your face because what he's playing is the groove. Billy Higgins, Philly Joe Jones, Ben Reilly, guys that really have that warmth, big fuzzy balls of lovin' in their playing and I Just don't hear that in many guys. Harold has something you can't go to the store and buy. He's a very organic player. When he hits the kit hard, it never sounds loud to you. It's this overall feel and vibe you can get. It's that sound and the way he hears the music."

As Brophy returned to the drum kit, the band broke into "Who Knew?," a fast-paced tune that Mayer based on the changes to the standard "I Know that You Know." The set was rounded out by Lou Brown's "The Thrill Is Gone"—a rendition so dirty and funky it could make a room smell like sex—and Wes Montgomery's "Trick Bag."

Scott is a mainstay in the Boston area, who can typically be found around town in piano formats. He describes his piano style as rooted in bebop, influenced by the Detroit sounds, and drawing from the Bud Powell lineage. Scott performs weekly at Redline in Cambridge, Massachusetts; his band has an upcoming performance at Chianti's in Beverly, Massachusetts; and he will be sitting in for a New York performance with Brian O'Neal} in March.