Advertise
12
We Travel the Spaceways 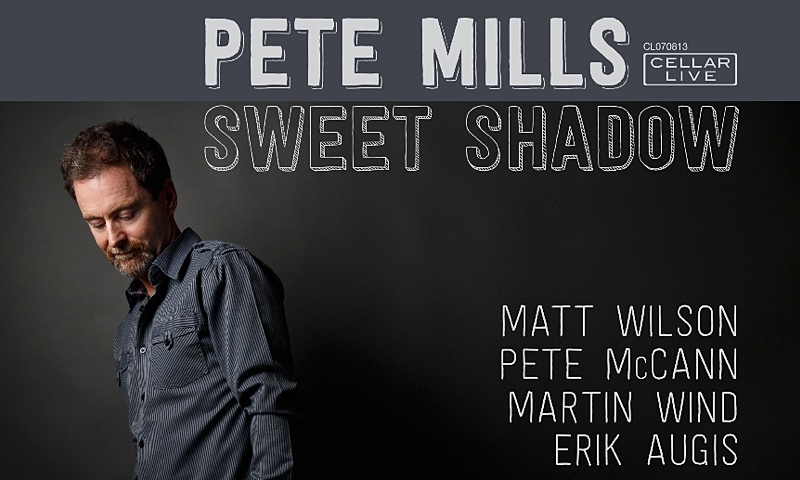 view slideshow
By Mark Corroto
January 28, 2014
Sign in to view read count
I'm here to tell you that everything you thought about the making of a modern jazz records is wrong. The notion that there are talent agents selling concepts to record companies—wrong. That bands work on tunes, perfecting them for months before entering the studio—wrong. That jazz musicians make money from records—again, wrong.

I had the first-hand experience of observing how saxophonist Pete Mills put together his latest recording Sweet Shadow (Cellar Live, 2014) from conception to release. If you take one thing away from this journey, it is that fish got to fly, birds got to swim, and jazz musicians have got to record. And, even though jazz occupies less than 1% of the records sold, and even less if we are talking about music downloads, jazz musicians keep recording and releasing sessions.

Disclaimers first: Pete Mills happens to be a good friend of mine. When you are a jazz critic, me, and an ex-patriot Canadian saxophonist, Pete, both living in Ohio where brass instruments are most noted for dotting the "i" in a certain football team's "Script Ohio," you tend to gravitate towards each other. I wrote the liner notes for Pete's Art And Architecture (Summit Records, 2004) and interviewed him for the notes to the highly acclaimed Fresh Spin (Summit Records, 2007) with Hammond B3 organist Tony Monaco. Mills is a graduate of both the Eastman School and the University of North Texas music schools, he teaches at Dennison University, and plays in the Columbus Jazz Orchestra. He has recorded as a sideman on dozens of discs, and Sweet Shadow is his fourth release as a leader.

Back in the winter of 2012, Pete called and told me he was thinking of recording another album. He had just come back from Winter Jazzfest and his creative juices were percolating. My reaction was, why? Then, why not take your wife to Europe for a month or buy a new car, instead of taking time out from your teaching and touring schedule to write new music, rent rehearsal and recording space, pay engineers, mixers, musicians, videographers, and publicists? He mentioned something about that fish and birds thing. You see, jazz musicians need snapshots or freeze-frames of their lives. These take the form of recordings. One hundred years after we are gone, Pete's music will still be here, probably in bytes and bits in some cloud somewhere, but still here. Not something we can say about Buddy Bolden's sound or countless ensembles over the years that never laid down tracks to wax, analog tape, or digital devices.

But let's back up. Your notion that there is a modern version of Blue Note's Alfred Lion or Verve's Norman Granz signing up talent, paying for recording sessions, and arranging distribution are gone. That is unless your name is Herbie Hancock, Wayne Shorter, or Pat Metheny. Sure those giants can command the attention of large media conglomerates, but if you are today's equivalent of Hank Mobley, or Ike Quebec the onus is on you to document your music. And records aren't made in the early morning hours after a Five Spot date at Rudy Van Gelder's studio. These days, the musicians are spread out over the country, if not the world. Coordinating schedules for a drummer touring Japan and a German bassist who lives in Brooklyn can be trickier than playing Thelonious Monk's "Trinkle Tinkle."

Certainly records can be made on the cheap in home studios, and a lo-fi recording will sound sort of okay on your iPod through those crappy little earbuds. But, to record in studio, with a skilled engineer, and have that session mixed and mastered by a professional is indeed a thing of beauty. One that will cost you some serious bucks.

The question still remains, why go to all that trouble? With the rise in digital downloads and the subsequent piracy, many small (and large) labels tanked. Sure, Miley Cyrus and Lady Gaga know that half of their fans are illegally downloading music, but half of 3 million is still quite a bit of money. Saxophonist and entrepreneur Tim Berne's Screwgun Records sales were cut in half by fans that found no need to support him, and instead stole his music. Berne gave up the independent record business. You can be certain that within days after Pete's music was available, someone posted 'free' digital copies somewhere on a server in an Eastern bloc country.

So, why did this saxophonist go to all the trouble?

Maybe because Pete Mills is old school. He still has his father Ernie's LP library and an autograph book with Charlie Parker's signature in it. I'm guessing that somewhere deep down inside his being, he needs to file Sweet Shadow alphabetically between the music of Mulgrew Miller and Charles Mingus in that same music library. But there is also that question of a tree that falls unwitnessed in the woods. To record Pete's axe in 2013, we can positively state that he has made a sound.

Writing music for this new disc, he drew inspiration from two musicians he has regularly gigged and recorded with, guitarist Pete McCann and drummer Matt Wilson. Both players are musical chameleons, able to change sound and shape according to any situation and both players were featured on Pete's previous discs, Art And Architecture and Fresh Spin. With McCann and Wilson, the possibilities for musical expression are endless. McCann is a member of saxophonist Grace Kelly's band, has recorded as a sideman on over 60 discs, including Anton Webern's music with John O'Gallagher, Dan Willis and The Velvet Gentlemen's Satie Project, and he also stars in the 1970's jazz/rock tribute band The Mahavishnu Project. His shy insurance salesman looks belie his wicked chops. He can switch from sounding like Jim Hall to that of Sonny Sharrock in an instant. Like McCann, drummer Matt Wilson eschews musical labels and genre as limiters. During a performance, he may don a wig and do his best impression of a stadium rock drummer or alternately expound upon Baby Dodds drumming style. He is the class clown who also knows the materials inside-and-out.

With McCann and Wilson, Mills knew he could write complex music and have this band negotiate it without weeks of practice and touring, or ink simple melodies that would blossom in studio with little worries. As his writing progressed, he worked out the music with Erik Augis, his local collaborator and the pianist in Mills' bands for the past ten years. Augis' sound calls to mind mid-sixties Herbie Hancock, one waist deep in tradition, but itching to explode into its own style.

Checking in with Pete over the summer his oft-repeated banter went something like this, "I'm ready—I love these new tunes." Then "I'm not ready—I have to rewrite most of this stuff." "Okay, I'm ready—no, I'm not." When he wasn't playing other people's music in the Columbus Jazz Orchestra or in some touring Broadway musical (this, after all, pays the mortgage), he was woodshedding. That, and scheduling the eventual studio session, coordinating musicians, and engineers, booking flights, finding a videographer, and shopping the concepts to potential record companies.

One year from its genesis, the musicians assembled in New Jersey at Trading 8's studio to record. Matt Wilson suggested bassist Martin Wind from his Arts & Crafts band. An accomplished classical bassist, Wind's bowed bass is the nostrum for Wilson's self-styled hyperactivity disorders. Each came bearing scores of Pete's music, new to McCann, Wilson, and Wind, but, of course now familiar to Augis and Mills from the past summer. As with any successful jazz session, the written music is but a framework which the quintet would build their house.

Over two days the band worked and often reworked the materials. The ease in which the old friends McCann, Wilson, and Mills mixed with the new players Augis and Wind is evident from the recording. The music went in directions not anticipated by the saxophonist. But then, he relied on the players to influence and add flavors to the final product. With studio time left over, Pete and Matt recorded two simple, yet deliciously marvelous duos. I was allowed to hear the rough cuts post-production, and was intrigued to find that most of the final product was cut in one or two takes.

What happens next is expensive. Mixing and mastering a recording is a mysterious and undetectable art that reproduces the music actually played in studio, onto the discs. When done correctly, the listener's experience is three-dimensional and sound is projected as if the quintet is performing in the listener's space. Listening to Sweet Shadow, you can hear the wood of the bass and the warmth of breath flowing through Mills' horn.The mixing process is a negotiation, do you want the drums up front, or is the saxophone the centerpiece? While the 'brand' here is Pete Mills, the music comes forth as a group sound.

With the imminent death of the physical CD, two almost opposite phenomena have risen. Musicians either present their music in purely digital form or press limited edition LP vinyl. The digital route eliminates the need for a label, but the artist runs the risk that his or her music will be overlooked, becoming just another drop in the digital ocean. The vinyl option will of course, slow down (ain't no way to stop them) the digital pirates, but the expense of the pressing and mailing will guarantee that even a smaller number of fans will get a listen your music.

Digital maybe the future, but today's old school sticks with the physical copy.

The spring mixing and mastering moves onto a summer of photo shoots, graphic design, CD production, and the hiring of an expert to handle press relations, all tasks once handled by record company executives are now the artist's job. This new world is something many creative artists are not prepared for. The trade-off of doing these yourself allows for more control of the finished product, but it also requires Mills to negotiate with all the necessary suppliers. Fortunately, Cory Weeds of Cellar Jazz Club in Vancouver is a big Pete Mills fan. He agreed to release the disc on his Cellar Live Records label and provide distribution both digital and physical. In the old days, the label might have signed Pete and told him who his sidemen were going to be and which songs he was going to cover. They would dictate these things because they were taking the financial risks. Well, sort of. They might have owned the rights to the songs and the sidemen might also be in their stable of players. Today, the artist takes most of the risks, and the label well, much of the credit.