'Music In Motian,' by Emmy winning guitarist Carl Michel and his quartet of bassist Dan Kolton, drummer Alex Trajano and piano-man Mick Dobday is an astute and finely curated, crisply performed collection of the drummer’s canon. —Mike Jurkovic, All About Jazz 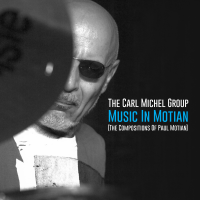 The music of drummer/composer Paul Motian is revered in certain circles of jazz, while resting in obscurity among others. The performing credits of Motian run deep and are extensive, but as a author of highly original music, he lies in the under-documented category. This will not last much longer as, in the years since his passing, his followers are carrying the torch, one such notable being guitarist Carl Michel.

Michel (pronounced Michael) has recognized the contributions of Paul Motian, and he has re-created a complete repertoire of his music. Ann Arbor-based jazz guitarist and composer Michel now has recorded a compendium of Motian's music played with expert musicians from Southeastern Michigan, a one-of-a- kind tribute to Paul Motian's music, with adaptations and extrapolations akin to the fertile musical mind Michael is inspired by.

The late drummer Paul Motian was an icon not only among his fellow percussionists but as a composer in his own right. In addition to performing with his own group, he performed with the great pianist Bill Evans’ trio and the legendary Keith Jarrett-led mid-70s small ensemble, while working sidebar gigs with Charlie Haden and Bill Frisell and recording for the Nonesuch, ECM and Winter & Winter labels, among others. Motian became important in many additional ways as a mentor and unique presence in modern jazz.

In his research on and recording of Motian’s music, Michel discovered a blog of Cindy McGuirl, Paul Motian’s niece, who has self-publishing a book, The Compositions of Paul Motian Volume 1 1973-1989. Volume 2 of Motian’s compositions will be out early 2018. Her blog, titled “Uncle Paul’s Jazz Closet,” has podcasts of radio shows that she curates featuring her uncle’s music.

As far as Michels’ connection to Paul Motian’s music, it goes back to his early interest in jazz. “I got information from record stores—the first record I had was a Wes Montgomery/Milt Jackson album, then Ralph Towner and Gary Burton. I liked the ECM label and the sound. I fell into John Abercrombie and Pat Metheny pretty hard, but I found a promo copy of Dance by Paul Motian on ECM, and at first I didn’t get it, but I loved the spacious sound, and there was no other drummer so unique. I got acquainted with Keith Jarrett’s American Quartet and Quintet. But it was Paul Motian's Live In Tokyo that really turned the light on, and I realized so much in his music- elements of Thelonious Monk, Eastern European music and Ornette Coleman coming together in his writing—and it hit a peak.”

“I tried to get in touch with him, wrote to the record label—his music is not in The Real Book—and he graciously sent me 10-12 copies of his music. There’s a lot of depth, and you see how the writing is becoming stronger. By then, he was not touring, only playing in New York, and I went to the Village Vanguard to hear him, Bill Frisell and Joe Lovano. It was religious and mesmerizing. After he passed away in 2011, I was able to meet others through the internet who were interested in his music and had copies and was able to exchange music with them. I wrote his music administrator to see if I could get more, was able to, and did the recording project of which I’m proud.”

Now, as a definitive statement, the music of Paul Motian is available to the world through the keen lens of Carl Michel for all the world to hear, listen to, and deeply enjoy.