By Greg Simmons
June 1, 2012
Sign in to view read count
In its heyday, Blue Note records had a relatively stable roster of musicians. Leaders including saxophonist Hank Mobley, trumpeter Freddie Hubbard, pianist Horace Silver and saxophonist Lou Donaldson all released lengthy strings of records during recording relationships that were measured in years. Some players, like bassist Paul Chambers, became de facto house musicians for the label, appearing on dozens of titles by a myriad of leaders. Musicians liked the sound that Blue Note delivered, and appreciated owner Alfred Lion's dedication to their art form. There were a lot of titles that never reached popular consciousness, and in fact, some of the albums of the mid 1950s had pressing runs that numbered only in the hundreds, not even thousands. But, the creative support afforded to the musicians allowed them to lay down what is today, arguably the most important catalogue of recorded jazz.

Any good record label has to nurture new talent or risk becoming stale. The best way to accomplish this is to bring in new musicians, cut a record or two, and see if it catches on. Sometimes that experimentation yields productive, long-term relationships, and sometimes it yields one—maybe two—records that quickly fall from memory. Blue Note, like any other label, had its share of one-off recordings, and owing to Lion's ear for talent, many of them are quite good.

Of course, there are always hard-core collectors and students of the label's most esoteric offerings who remember and cherish these records, and understand their musical value. Before pressing his own vinyl, Ron Rambach, owner of Music Matters was—and remains—a collector of original Blue Note records. Little wonder then that when he set out to re-issue the catalogue, he included several of these unique recordings. The Music Matters series of reissues of classic Blue Note records gives listeners a chance to hear some of this music by artists few people have ever heard of. The series has done an excellent job of including rare titles in the series, along with the big- selling favorites. Inclusion of these records is a credit to the curatorial designs of the series.

Unusually in this day and age of digital downloads and the ubiquitous presence of MP3 players, the Music Matters reissues are only released on vinyl, and then only as two-disc 45 rpm sets. Rambach believes strongly in the superiority of analog playback, to preserve the integrity of the original recording, and to recreate the highest possible sound quality. All of the albums are re-mastered directly from the original master tapes, and it's hard to argue with the results. Played on even a moderately good turntable, these pressings offer exceptional detail and scale. A turntable might not be as convenient as an MP3 player, but man, these records sure sound nice! 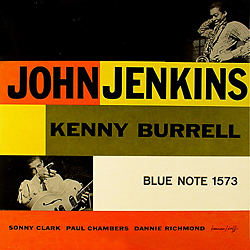 As best as can be reckoned, alto saxophonist John Jenkins recorded exactly two albums as a leader, both in 1957, and only one on Blue Note. His discography as a sideman is almost as short and was mostly recorded the same year. By the early 1960s he was gone. Besides his obvious withdrawal from the life of a professional musician— which is not in dispute—there is very little to known about him. His single Blue Note record, John Jenkins with Kenny Burrell, was recorded in August of 1957 and begs the question: why would a musician with obvious talent just stop playing?

John Jenkins With Kenny Burrell is mostly a straight bebop date featuring three of Jenkins originals. It's clear that he was disciple of Charlie Parker— as almost every alto player was in those days—but unlike some of the contemporary Lou Donaldson records, Jenkins avoids simply copying too many of Parker's licks. Instead, he offers up an unusually fat, warm tone on his horn and he is a competent, if not especially original soloist. Had he continued to play—like most musicians of the era—he likely would have grown into his own sound, making this record a tantalizing exercise in 'what- if?.'

The supporting players on this date are a solid who's who of the Blue Note stable of musicians. Kenny Burrell was a regular as a leader for the label. On this date he lays down some really solid counterpoint to Jenkins' bebop melodies, along with his typically well-crafted solos. The ill-fated Sonny Clark pops the keys with intense fervor, and Paul Chambers' bass propels the up-tempo session ever forward. The only irregular is drummer Dannie Richmond, who nevertheless, keeps solid, swinging time.

Like most musicians of the era, expanding the basic language of bebop was still a few years away. Jenkins' contemporary, altoist Jackie McLean, eventually became one of the more progressive leaders of the post-bop era, and based on this one record, Jenkins had the potential to be right there with him. His chops were there, they just needed a little more time in the oven. Nevertheless, John Jenkins with Kenny Burrell is a fine record, that's a pleasure to hear. 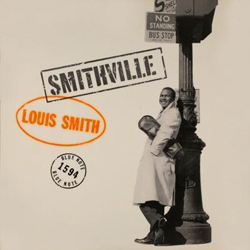 Trumpeter Louis Smith had a twenty-year recording hiatus between his two 1958 sessions for Blue Note and his re-emergence on the Danish Steeplechase label. Perhaps attracted by regular hours, or the steady paycheck, Smith left the jazz scene to be a teacher at the University of Michigan and the Ann Arbor public schools. While that may have been a good decision for Smith personally, it left a void for music fans: this guy was one smoking good player.

His second and final date for Blue Note, Smithville, opens with the title track: a big, mid-paced blues that showcases the depth of Smith's sound which lies somewhere between brass and bronze. He's got taste and soul, and he puts both qualities right up front with quivering vibrato that makes the notes come alive. His sound was more Clifford Brown than Dizzy Gillespie, but he had a pungent dash of Miles Davis' blue smoke as well.

Having established his subtlety Smith dives right off into "Wetu," a seriously hard-swinging bebop jam that shows another side altogether. The melodic line is reminiscent of Parker's fastest compositions of the late forties—the ones Miles Davis regularly complained about. Like Davis, Smith plays his bebop in the middle register, staying true to his burnished sound and staying away from piercing high-note histrionics. What he leaves in his wake is some really fine, fast, powerful trumpet playing. This guy could cook!

Smith is joined on this date by the still under-rated Charlie Rouse on tenor saxophone, and the same pianist and bass players as on the Jenkins record: Sonny Clark and Paul Chambers, both of whom play to their usual high standards. Drummer Art Taylor brings an added depth of time to the record.

Although released in 1958, Smithville is also a monaural recording, suggesting that it was recorded earlier and then shelved (Blue Note switched to stereo recording in 1957). The recording quality is nothing short of amazing, with some tracks creating an illusion of stage width that belies the single-track master tape. There are some very fine mono recordings in the Music Matters Blue Note series, and for sonic excellence Smithville is near the top of the heap.

Smith suffered a stroke in 2005, which ended his playing, but he is still alive. Unlike Jenkins, he has a substantial body of work available through his later Steeplechase recordings. Smith was a trumpet player of much better than average talent and skill and Smithville is a testament to his best qualities. 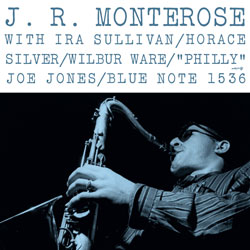 J.R. Monterose was a notable saxophonist in 1956. His playing was already starting to break away from the legacy Charlie Parker, who had died just the year before. He clearly played bebop, but Monterose had a distinct sound on tenor that included some then nascent harmonic ideas and—by the standards of the day—odd bits of discord thrown into his solos. His only eponymous record for Blue Note included some very forward-thinking saxophone playing. Also unusual for the time, the album does not include any standards. Every track on the record is penned by Monterose.

As a soloist, Monterose has a big powerful horn that fairly explodes out of the mix. In addition to well-practiced bebop lines, he periodically slurs his notes between tones, and toys just a little with the kind of arpeggios—sequential chord playing—that John Coltrane would embrace just a year or two later. Monterose is nothing if not confident in his abilities, and this performance is utterly devoid of anything resembling reticence.

His compositions, while mostly bop, also include bits of the Latin tinge that Horace Silver— the pianist on the date—would later include in his own recordings. Silver, who had already embarked on his Blue Note recording career, adds slower improvisations to swinging numbers, creating a distinct contrast. In addition to Monterose's lead performance, trumpeter Ira Sullivan adds some fire, and in places almost steals the show.

Like Jenkins and Smith, Monterose did not linger in the New York City jazz scene, although he continued playing smaller venues in the United States and Europe. His recording career is sparse and itinerant, with no more than half a dozen total recordings under his own name over a fifty- year period, plus sideman gigs with bassist Charles Mingus and trumpeter Kenny Dorham.

Rather than revealing any new stream of jazz, these three records largely reinforce the fashions of the day. These dates are played solidly in the logical—yet at the time—restricting conclusions of bebop that would shortly become the building blocks of a more aggressive, transmogrified, boundary-shattering language. Only Monterose pokes at the obstacles of convention, and even then, just barely.

That's not to suggest that these records are dull in any way, in fact, far from it. The Music Matters vinyl pressings bring out extraordinary details that won't be matched by any CD, which in turn highlights the artistry of the musicians. These are big, bold records with a cast of highly talented, well rehearsed, powerful players. We might not know for sure why Jenkins, Smith and Monterose left the scene, but it's easy to contemplate what might have been had they stayed: It could have been some beautiful music.

Tracks: From This Moment On; Motif; Everything I Have Is Yours; Sharon; Chalumeau; Blues For Two.

Tracks: Smithville; Wetu; Embraceable You; There Will Never Be Another You; Later.