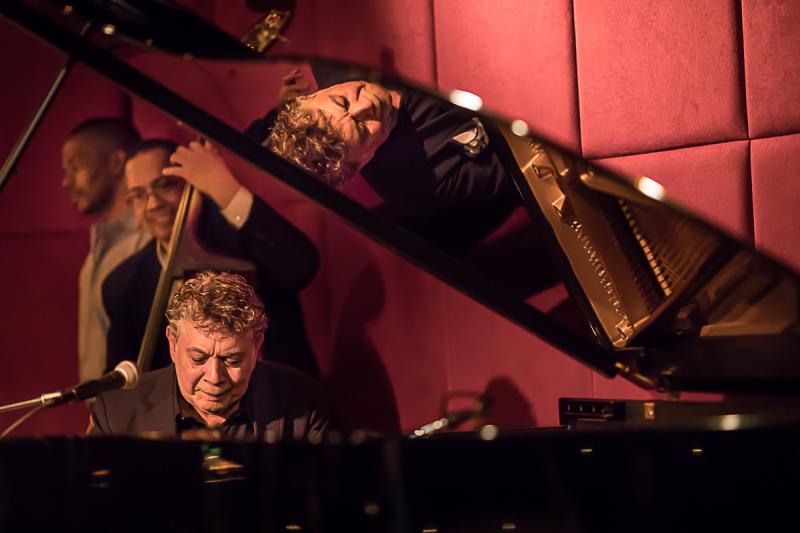 A lot has changed since I started covering the New York beat for All About Jazz in mid-2016. In that time, we have witnessed epic changes in our city, our country, our world—changes that are already affecting our culture, including and perhaps especially jazz and, in the broader context, African-American life. How can music journalists remain unaffected? Since the presidential election in November, rather than experiencing jazz, the New York @ Night beat has moved to protests at Fifth Avenue and 56th Street, in Washington Square Park, and (although technically not at night) the incredibly uplifting Women's March in NYC on January 21. Happy to report, the resistance has just begun.

So where does that leave New York @ Night as a resource for jazz lovers? One answer to that question was suggested recently during a beautiful set played by the great Monty Alexander and his superb quintet at Jazz Standard. Seventy-two years young, the pianist was in town for a five night run called, "Looking Back," during which he and hand-picked associates played highlights from key years of Alexander's remarkable career. The chronological review kicked off with "1969: That's The Way It Is, Remembering Milt Jackson and Ray Brown." Next up was "1977: Jazz at the Philharmonic, Remembering Dizzy Gillespie, Clark Terry and Milt Jackson." The third part of the run connected the Kingston, Jamaica, native's early roots as a session player to the present day with "2016: Jamaica & Jazz: Harlem-Kingston Express Plus, Remembering Studio One."

I was fortunate to catch a set of "1969: That's The Way It Is" where Alexander's sterling support included the masterful Warren Wolf on vibraphone, doing much honor to the late, great Milt Jackson (whose widow was in the house that evening); Ron Blake on tenor saxophone, taking the Teddy Edwards solos; and a rhythm section of Jason Brown on drums with J.J. Wiggins Shakur ably filling the very large shoes of Ray Brown on bass.

As a leader, the ebullient Alexander has been pleasing crowds around the world for decades. The Jazz Standard set provided an intriguing reminder of where he came from and his abilities as a sideman to drive a band where the vibes and sax take primary roles. The "1969: That's The Way It Is" set appropriately kicked off with the tune that begins the album of the same name, "Frankie and Johnny." Swinging solos on the traditional blues were offered up by Blake on sax, Wolf on vibes, and then the leader, Alexander, before resolving in a clever bass solo by Wiggins Shakur. Next up was Thelonious Monk's "In Walked Bud," the swinging ode to Bud Powell led in here by Wolf on vibes and given loose, fun rhythmic interplay between the bass, drums and piano. The familiar "Work Song" of Nat Adderley followed, treated here as a showcase for Wolf on vibes. Deeper into the Milt Jackson songbook the set went, with "Homage to Django," written by Jackson's Modern Jazz Quartet colleague, John Lewis, with Warren Wolf once again tearing it up with his magic mallets. The group next veered into John Coltrane territory and turned up the tempo with "Impressions," a racing showcase for Ron Blake on sax and Jason Brown on drums, with hints of the Miles Davis chestnut, "So What," thrown in to round out the jam.

Last up was a big, brilliant rendition of the Duke Ellington standard, "Things Ain't What They Used To Be." Given Alexander's close association with the music of fellow Jamaican Bob Marley, and his two albums of Marley's songs of freedom and rebellion—Stir It Up from 1999 and 2006's Concrete Jungle—it's likely the choice of this particular Ellington tune to close the set was a message. Things are most assuredly not what they used to be. The tune put us in mind of the tumultuous change the world is undergoing, the dangerous ideologies that appear to be driving the train, and whether or not "this train is bound for glory," as Marley once sang, or it's about to go off the rails—if anything is clear, it's that things ain't what they used to be. And so, as the set ended and the audience stood in appreciative applause for Monty Alexander and his band, we were also thinking of Marley, and the millions of people who now "get up, stand up."