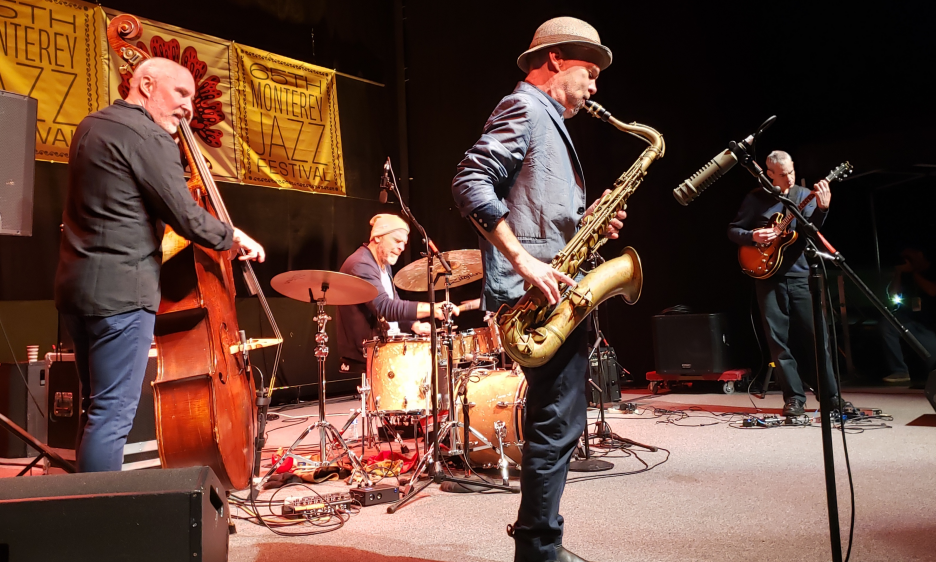 By Josef Woodard
October 5, 2022
Sign in to view read count

For the finale of the arena portion of this year's Monterey Jazz Festival programming, Gregory Porter channeled one of the aspects which make him special in the jazz pantheon, as spirit mover with gospel roots, and with show biz instincts in tow. Launching into his moving, swaying anthem "No Love Dying" as an encore for his festival-closing set, Porter invoked the classic "lighter" moment clause in concert behavior, with thousands of listeners waving their cell phone flashlights in the night sky while singing along to the refrain.

What could have been cloying or a cliché somehow transcended into the stuff of cathartic togetherness of the type only live music can inspire, at a time when we're still in a honeymoon with the experience of live music at all.

On another grander scale, catching the Monterey Jazz Festival, in its 65th anniversary edition and its second program since the COVID-mandated 2020 lockdown/meltdown, delivered its own cathartic impact. The oldest continuous jazz festival on the planet and the best jazz gathering on the west coast continued with the long tradition established especially during current director Tim Jackson's lead, with a carefully-curated and balanced feast of acts both commercial and adventurous. The goal here seems to be laying out an agenda which somehow conveys the current state of jazz, from many angles, while also making the numbers work and satisfying the divergent tastes of a jazz audience grown both more fragmented and more eclectic-eared.

Among the "mainstream" category this year were Chucho Valdes' venturesome La Creacion project, a MoodSwing reunion of Joshua Redman, Brad Mehldau, Christian McBride and Brian Blade, the all-female sensation Artemis—sounding better than ever—the Kurt Elling / Charlie Hunter groove machine SuperBlue and Porter as a righteous benediction. On the more challenging front, we were treated to the new incarnation of The Bad Plus—the guitar and saxophone model—Joel Ross' "Good Vibes" (with ally Immanuel Wilkins, who played multiple sets last year on the Courtyard Stage), the Gerald Clayton Trio (with Ross and Wilkins), and a John and Alice Coltrane tribute set on the mainstage, featuring Ravi Coltrane and guest Brandee Younger, the gifted and unabashedly Alice-inspired harpist.

Last year, the Monterey program was forcibly put together on short notice—due to ever-shifting pandemic conditions—and at about half speed. This year, the program, though still short of its pre-pandemic spread of five stages around the Monterey County Fairgrounds, swelled to a more substantial offering, thanks to the new secondary outdoor stage dubbed the "West End Stage" (the three or four indoor venues remained closed).

An early taste of the West End's robust roster came early on Friday evening with the commanding young singer Samara Joy. Winner of the Sarah Vaughan International Competition in 2019, Joy's career has been fast-tracked ever since—and might have tracked faster were it not for the COVID smackdown. Here, she asserted her easy stage presence and audience interactions and her history-informed musical prowess. She eased into the various challenges and vocabularies of Betty Carter's "Tight," Monk's "Worry Later" and Carmen McRae's "If You'd Stay the Way I Dream About You," with a winning expressive magnetism.

Another more veteran, but still underrated singer, the Dutch/Portuguese/NYC chanteuse Fleurine, commanded the West End stage in a different mode, locking into her deeply-steeped affinity for, and ability within Brazilian music. Her subtle but sure approach benefitted from a strikingly fine Brazilian band in tow. She sang one charming song about her now-grown son at five, in competition with dad for her love (dad being Mehldau, who was playing across the fairgrounds on the arena stage).

Fast forward to the literal tail end of the festival on Sunday night, the last musical statement was also on the West End, in the form of Nate Smith + KINFOLK, the acclaimed, powerhouse drummer's range-y and exciting new project. Funk, prog rock, rhythmic puzzles and lyrical asides are all in the mad yet artful mix, plus expected drum-istic focused fury from Smith—but tastefully applied. KINFOLK ended the weekend on a bracing, future-leaning note.

Particularly given this year's use of strictly outdoor stages, it was possible to enjoy the Charles Ives-ian effect of differing musical sound sources intermingling as one drifted—or raced—from the Arena to the West End. On Friday night, for instance, you could catch a hearty dose of Cuban legend Valdes' potent concept piece "La Creacion"—abetted by the Hilario Duran—directed Youband Orchestra and John Beasley's fascinating band Monk'estra—and veer through two different shades of jazz guitar trios.

On the Garden Stage, mainstream guitarist Bruce Foreman was laying down his mainstreaming goods with John Clayton and Jeff Hamilton, bass and drums. That sound melted into the more contemporary flair and flavor of go-to guitarist Julian Lage's trio, in cahoots with drummer Dave King and bassist Jorge Roeder at the West End as destination. Then yielded to now, but a now with historical "then" inflections. Among the straighter tunes in the set, the most powerful expressive moment came with "Let Every Room Sing," veering from Ornette Coleman—like melodics to ethereality and an energizing climax and back. Jury's still out, but the ten-minute piece may have been this listener's festival highlight.

The agile, poetic and flex-minded King connects with Lage's own remarkably versatile and sensitive playing on some special level: they've got to keep meeting like this.

Next up onstage, King returned with his own now almost quarter-century old band of renown and rebellion, The Bad Plus. The big news at the moment, in Plus-land and jazz buzz, is that the longstanding bass-drums-piano format of the band, for many years with the great and witty Ethan Iverson on keys, followed by Orrin Evans, has given way to the new format of tenor saxophone (Chris Speed) and guitar (Ben Monder). As heard in its gripping Monterey set, the new Plus is both fresh-sounding and, strangely, a delayed manifestation of the inherent rock element in their music, which had been cleverly detoured in its old "piano trio" context. Distorted guitar? Welcome home.

The new-ish band may lack in the old humor and kitsch departments, but if you're inclined towards the Bad Plus aesthetic party line, it will rock you.

Another case of history being revised and revisited came with the return of saxophonist Redman's original band, which recorded the career-launching album MoodSwing in 1994. That line-up revealed to the world significant musicians—Mehldau, McBride and Blade—who would later become major figures in jazz of the past quarter century, especially in the case of Mehldau. The pianist arguably stole the show, with his eloquent soloing and as composer of an alluring and delightful left-of-normal march-based tune from the quartet's new album LongGone. Redman, a skilled chameleon who knows how to tap many sub-directions within jazz, plumbed mainstream jazz directions while satisfying customers of a more general stripe. All these years later, the chemistry and mutual respect within the ranks was palpable.

For the record, Bowers' new work takes its place on the short list of commissions with a site-specific reference. That list includes Jason Moran's radically different 2009 piece Feedback, built up from a live recorded snippet of Jimi Hendrix' mythic guitar-burning Monterey Pop Festival performance on this very arena stage in 1967.

Over on the Garden Stage, the basket of goods included sets with both integrity and a will to party. On Friday night, the masterful and malleable trumpeter Nicholas Payton served up ear-capturing solos and creative electro-acoustic textures and grooves with his trio New World Order. On Saturday, the style clock turned backwards to soul-jazz impulses courtesy of the charismatic wunderkind Matthew Whitaker, on B3 and piano. The blind keyboardist summoned up a whirlwind of infectious energy with his band, and raised the heat level with punchy new renditions of Marvin Gaye's "What's Goin' On" and the iconic Earth, Wind & Fire hit "September," weaving and bobbing with the spirit.

One of the tasty treats from the unexpected aspect of the program came in the form of a dazzling dance team of the three Mukanga sisters from the Netherlands, known as "Let It Happen." In short ten-minute segments all weekend, they unleashed their taut, stunning choreography to jazz, R&B and snippets of civil rights archival recordings. "Let it happen!" could also be an unofficial maxim for MJF, especially in its recovery period.

Another recurring feature of the Monterey festival is the anchoring presence of long-time supporter and veritable neighbor Clint Eastwood. Even after all these years, it's possible to feel a bit of the star-struck buzz when the lean Eastwood walks over to his seats a few rows in front of you. This guy, from working his Dirty Harry persona to directing Bird, Unforgiven, Mystic River and countless other brilliant films, the guy who told us to get off his lawn, rifle in tow, and has championed jazz more than virtually any other Hollywood figure, is part of the fabric of what makes Monterey one of the world's most fertile soils for jazz, for one fall weekend a year.

Festival number 65 is history, with no sign of retirement in sight. Re-firing up, yes.