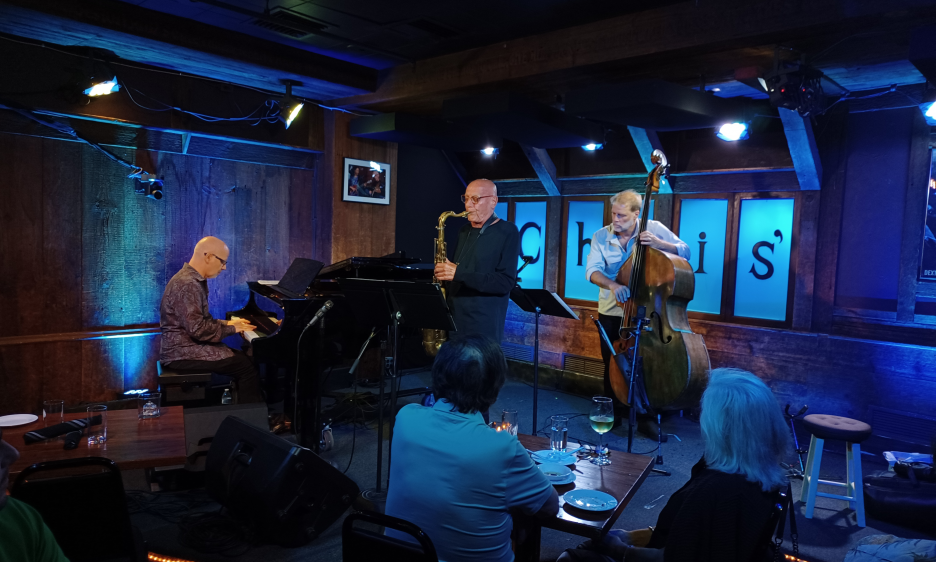 This superb set of mainstream jazz by three accomplished and dedicated musicians: Michael Pedicin on tenor saxophone, Jim Ridl on piano, and Dean Johnson on bass, owes much of its successful execution to the trio format without drums. The absence of drums places more of the rhythmic responsibility on the others, especially the bass, but it also gives each player more ear space to listen and play with greater focus on their craft and art. Utilizing such a format, these fine players created an atmosphere of a music salon in which both musicians and audience were intently focused on the creative process. And the audience was captivated by the musicians' improvisational skills.

Pianist Bill Evans transformed the trio format into a high art form, so something needs to be said comparing Evans' groups with this Trio. Evans, of course included drums, to which he gave equal significance to the bass and his own piano playing. He thus elevated the idea that all three instruments in a trio are equal. "Just the Three of Us" embodies such an equality. The other powerful approach in the Evans trios was a lively musical conversation among the members, which can be heard in their many recordings with various personnel from the 1960s to 1980. By contrast, in this set at Chris,' the emphasis was on giving each musician the space to develop his own ideas in his own way. The rare 'conversation' among them only highlighted the individuality of each player's solos.

It was striking that most of the tunes in the set had themes of love, compassion, and empathy. Dave Brubeck's standard, "In Your Own Sweet Way," a warm expression of affection to his wife, began with Pedicin stepping up with a solo of precision and solidity. Ridl came on Red Garland style with (deceptive) simplicity and then broke out into the open way. Bassist Johnson improvised in an introspective, thoughtful way, mindful of his role in keeping the rhythm.

"Song for My Mother" is a song that saxophonist/composer Walt Weiskopf conceived as a follow-up to Horace Silver's classic "Song for My Father." It retained Silver's Cape Verdean and Brazilian feeling. Pedicin, Ridl, and Johnson each took solos as before. The trio absent drums indeed helped the audience listen intently to what each player had to say. Pedicin's style here was decidedly cool yet lyrical, reminiscent of the immortal Phil Woods.

Both Ridl and Pedicin worked with the late great guitarist Pat Martino after his comeback. As a tribute to him, they did his original, "Portrait," from the album Nightwings (Muse, 1996). The tune has a country feel consistent with a significant phase of Ridl's work such as A Door in a Field (Dreambox Media, 2007) which is based on his experiences growing up in North Dakota.

The group's rendition of John Coltrane's "Impressions" began with bassist Johnson's artful pizzicato that reprised the way Paul Chambers sometimes introduced Trane's playing. Ridl's solo brought out a certain sadness that is inherent in this iconic tune but not often captured. Ridl and then Pedicin traded off with Johnson, having a rare dialogue in the set . Ridl's solo was especially interesting, with staccato notes of repetitive complexity, like a classical piano etude. Pedicin seemed to be looking around for Coltrane, eventually emulating Trane's "sheets of sound."

Martino's classic "Turnpike" began with an unaccompanied introspective solo by Ridl, as if he were telling a story. Bassist Johnson then came in with the pulsating rhythm of the Martino version. Johnson's virtuosity and imagination shone in this piece, placing him on an equal footing with Pedicin and Ridl.

The standard "You Don't Know What Love Is" began with one of the highlights of the set: an extended beautiful cadenza by Pedicin in which he explored the many possibilities inherent in the tune. This led Ridl and Johnson into solos that emphasized the emotions of the broken lover who is the implicit narrator of a song whose lyrics are integral to the music.

The group concluded the session with Ridl's "You Know How It Is" from A Door in a Field, Vol. 2: Songs of the Green River (Self Produced, 2016). Ridl's several recordings expressing his country origins in North Dakota are an important part of the recorded legacy of jazz, and the trio honored that legacy by topping off the set of standards with it.

"The Three of Us" group convened a few months ago as a suggestion of Ridl. The group amply illustrated how the trio without drums gives each musician a chance to carefully weave his own tapestry. It will be interesting to see if future performances include more interactive, conversational opportunities like the Evans trios or adheres to the emphasis on solos. Their first show was live streamed from the Soapbox Gallery, a venue in Brooklyn whose internet availability became an important part of jazz during the height of the COVID pandemic. Pedicin pointed out that a recording of the Soapbox performance is already available: Just the Three of Us: For Peace and Unity (Self Produced, 2022).

Chris' Jazz Café deserves kudos for their near-perfect sound system and for the excellent services provided by their staff. The whole experience brought obvious pleasure to the folks who attended and listened intently. Steven Wright, an acclaimed actor in Philadelphia theater circles, did a brief but highly pertinent interview with the group during the intermission. If there is an award for being the best at the thankless task of emcee for a nightclub show, he gets it.

In Your Own Sweet Way (Dave Brubeck); Song for My Mother (Walt Weiskopf); Portrait—(Pat Martino); Impressions (John Coltrane); Turnpike (Martino); You Don't Know What Love Is (Don Raye and Gene de Paul); You Know How It Is (Jim Ridl).