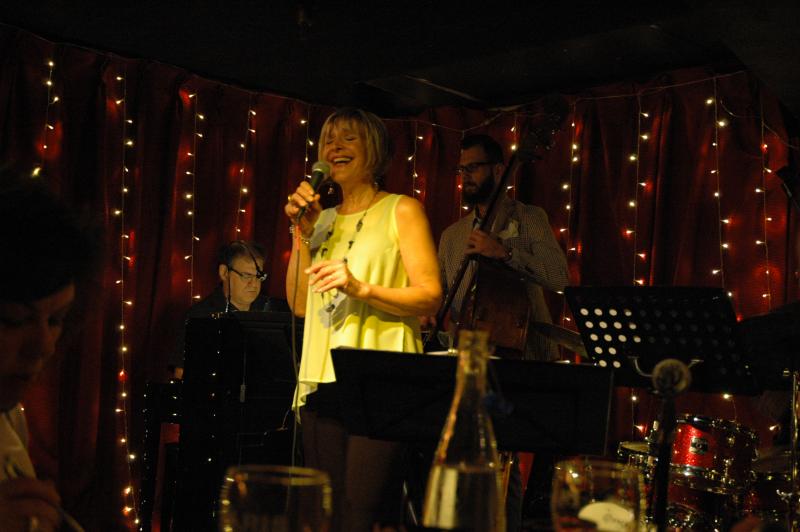 The Paris Bistro and Jazz Café is in Chestnut Hill, a neighborhood in the Northwest corner of Philadelphia that's like an upscale village all its own, with boutique stores and restaurants and the last stop on the Chestnut Hill train line. The jazz café is downstairs from the restaurant and has a small but comfortable stage, warm acoustics, and a very relaxed and friendly atmosphere. It was this reviewer's first visit, and the place proved to be an ideal setting for a set of standards performed by seasoned vocalist Mary Ellen Desmond and her crew of outstanding sidemen: Tom Lawton on piano, Justin Sekelewski on bass, and Jim Miller on drums. The setting and the music gave a taste of some of the Parisian jazz clubs on the Isle St. Louis and around the fourth arrondissement.

As always, it was a pleasure to hear standards sung by Desmond, who has superb vocal control and emotional expression, which makes each tune tell a story. She always picks a great rhythm section for her gigs, and this occasion was no exception. For an instrumental opener, the group chose the Charlie Chaplin theme song, "Smile" (though your heart is aching), booting it up to double time and delivering great swing. Lawton came up with one of his imaginative solos that always grabs attention. Sekelewski and Miller gave the piece real rhythmic punch. No need for heartache in this version.

Desmond came on with "September in the Rain," a swing tune that has a touch of bebop sewn into it. Then she did "I Wish You Love" with just the right amount of measured sentimentality. Cole Porter's "You'd Be So Nice to Come Home To" has been covered by every female vocalist in history, one of the best being Helen Merrill with Clifford Brown (Helen Merrill, EmArcy, 1954.) Desmond added interest with a Latin rhythm. Again seeking spice, she did "I'll Take Romance" in waltz time, a bit awkward since the tune is supposed to sail. (Occasionally, the refrain is done in waltz time for effect.) But Desmond more than made up for it with a song that she herself wisely has brought into the jazz repertoire: "Almost Blue," by Elvis Costello. She made this haunting ballad her own with interpretive grace.

The group gave "Willow Weep for Me" a rhythm and blues backing, which was more successful than the waltzing "Romance." A very smart bass solo by Sekelewski was reminiscent of Red Mitchell's carefully crafted bass lines and Neil Swainson's work with George Shearing. Miller's drum solo added intensity.

Thelonious Monk's tune "Ask Me Now" was done straight ahead with a bare minimum of syncopation and eccentricity. Lawton, one of the best interepreters of Monk, could have done more with it, but he rightly gave Desmond the opportunity to sing it as an unadulterated ballad. The set concluded with Harold Arlen's "Out of This World" in a lively swing rendition powered by Miller's drumming. (Miller's playing is an exceptional synthesis of Elvin Jones' sound landscapes and Billy Higgins' tight hard bop pulse.) On this one, Lawton's solo showed his powers of invention and nuance, a wonderful way to bring this masterful pianist out of the shadows and wrap up a beautifully done set of standards, the kind of thing which happens less often these days since there is an increasing pressure on musicians to beef up their performances with crowd-pleasing flashy innovations.

Set List: Smile (instrumental); September in the Rain; I Wish You Love; You'd Be So Nice to Come Home To; I'll Take Romance; Almost Blue; Willow Weep for Me; Ask Me Now; Out of This World.