By Mark Corroto
September 24, 2014
Sign in to view read count 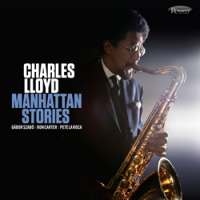 In most cases, the folklore of a happening is much stronger than the actual event. The "older I get, the better it was" credo applies to so much of the remembered past. Not so for the only documented recordings by Charles Lloyd's Quartet of guitarist Gabor Szabo, bassist Ron Carter, and drummer Pete La Roca.

Lloyd who, in 1965, had left his residency as musical director for Chico Hamilton and member of Cannonball Adderly's band, gathered Szabó (from Hamilton's employment) and formed this quartet. He would soon record Of Course, Of Course (Columbia, 1968) with Tony Williams replacing Sims. And that, as they say, was all she wrote. Gábor Szabó moved into a leaders role , Carter remained with Miles Davis's Quintet, and Sims became the drummer of choice for many Blue Note sessions. Lloyd's quartet morphed into the legendary unit of Keith Jarrett, Cecil McBee, and Jack DeJohnette, giving us the classic Atlantic recordings Dream Weaver (1966), The Flowering (1966) In Europe (1966), and Forest Flower (1968).

This short-lived, and until now, unheard quartet is quite the find. Lloyd was confronting the weight of the saxophone innovators John Coltrane and Sonny Rollins, and forging his own path. The two live recordings heard here are quite different. Disc one was recorded in the pristine environment of Judson Hall by then Columbia student (now head of Resonance Records) George Klabin. The second session was made in the rough and tumble environs of The East Village at Slugs Saloon.

Each disc presents three tracks, none shorter than 12 minutes. This allows for the players to stretch out, yet each track maintains a consistent motif. "Sweet Georgia Bright" opens The Judson Hall date with, not "Sweet Georgia Brown," but Lloyd's extemporaneous take on Thelonious Monk's "Bright Mississippi." The gem here, though, is "How Can I Tell You," his tribute to Billie Holiday. Lloyd begins with the sound of Coltrane's blues to build a cogent and eloquent solo of devastating elegance.

The tavern date opens with a spontaneous blues, "Slug's Blues." It is raggedy, joyful, sweaty, music making. Ron Carter's bass stands as a pillar for LaRoca to batter and Lloyd to launch. Heard on both dates is Szabó's piece "Lady Gabor." A sort of blues raga. The mesmerizing sounds wrap the guitarist's Hungarian roots with his passion for Gypsy, Asian, and Indian music. Lloyd complements with a full range of sound that he coaxes from his flute. The Slug's version comes with the grittiness and cash register sounds of a crowd. A very happy crowd