Thelonius: Crows On The Beeline

BY BRUCE LINDSAY
September 24, 2014
Sign in to view read count 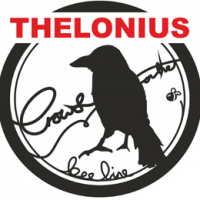 Thelonius announced its arrival on the scene with a brief-but-fun self produced EP, Reminisce, in 2012. The quintet, from Bristol in the west of England, blended its mix of influences—most notably hip-hop and Thelonious Monk—into a hook-laden and imaginative set of tunes. It was over all too quickly. Thelonius returns with the download-only Crows On The Beeline—a whopping 29 and a bit minutes of music. It's still hook-y, still infectiously danceable, still mixing hip-hop, bebop and a few other things in ways that gladden the heart. Still too short, too.

The Thelonius sound is underpinned by catchy, drum-led, grooves and full-on guitar chords. It's a sound that runs through original tunes such as the slow-burn "Julia"—the band's tribute to hip-hop producer and major Thelonius influence J Dilla. It's also perfectly at home on Thelonious Monk's "Straight No Chaser," fitting neatly into Monk's angular, fragmented, melody—Baker's guitar solo also sounds right at home on the tune.

A Tribe Called Quest's "Award Tour" is the album's other cover. Palmer opens up with a funky electric keyboard, Darbon and Haskins lay down a heavy, deep, groove and the whole thing flows beautifully.

Past band members Imogen Walker and Tom McMahon-Hoer share writing credits with the current line-up on "So Wrong, So Right." The tune mixes hip-hop beats with a rockier guitar sound, Evans' quirky additional percussion and a Latin-flavored mid-section. That might give the impression of an everything but the kitchen sink muddle but it comes across as a coherent, catchy, composition.

As a title "Hardcore Horn" sounds like it belongs in a Carry On movie, as a tune it mixes a simple bass/sax riff with soulful tenor and guitar breaks from Haskins and Baker. It's the album's smoothest number. "(The) Sofa Grooves" keeps Haskins' soulful sax but pairs it with a slinky R&B influenced groove led by Darbon's raw electric bass, set suitably high in the mix.

The band describes "Say Hello, Don't Whisper" as the album's centerpiece, which seems like a fair appraisal. It certainly gets the fullest sound, its impact heightened by multiple sax parts, a flowing mid section, hip-hop drum and bass and Palmer's tense, repetitive piano line. The most ambitious tune on Crows On The Beeline, "Say Hello, Don't Whisper" is also an exception to the "catchy, drum-led, grooves and full-on guitar" foundation, preferring a more subtle approach to the rhythm. Crows On The Beeline is the sound of a band in full flow, ideas, energy and enthusiasm leaping out of every tune—Thelonius marches on.