Malcolm Griffiths: A Man For All Seasons 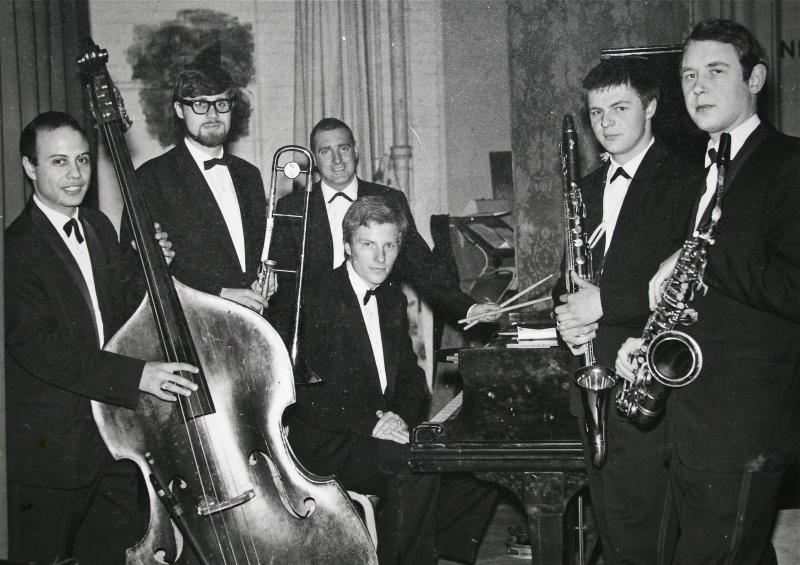 By DUNCAN HEINING
May 4, 2017
Sign in to view read count
We talk often of the stars, like 'Trane and Miles. We remember the bandleaders, such as Basie and Duke. We even recall the composers and arrangers, Ellington again, Gil Evans and Monk. And we never forget those star soloists like Johnny Hodges or Lester Young. But the guys in the machine room, the guys who make their leaders' visions real time and again are all too often just an afterthought.

Yet stop and think about what made those records special and made you go back time and again to hear some of their most perfect moments. How many of those came from a Lawrence Brown or a Bubber Miley or a Harry "Sweets" Edison. And no matter the country or the era, the boys in the back room have been there making it happen.

This is a story about one of those guys—the British trombonist Malcolm Griffiths. Not a household name in jazz terms, perhaps, but a fine servant of the music. He added to an approach derived from J.J. Johnson, the more bizarre sounds of the avant-garde and some of that New Orleans—Chicago tailgate trombone. Griff came of age in the sixties, playing in all the major bands of that era and beyond. He's there on most of Mike Westbrook's albums up to and including The Cortège (1982) and on more John Surman records than you can shake a stick at, if that's your idea of fun. You can hear him on Graham Collier's ground-breaking New Conditions and Symphony of Scorpions (1977) and was a regular feature with Stan Tracey's Octet. He even worked and toured with the Buddy Rich Orchestra in the late sixties and early seventies.

Sadly, Griff's mighty voice is silent now. Health problems with diabetes forced him to give up music some years ago but that cannot detract from the fondness in which he is held by British jazz musicians and fans. I interviewed Griff recently for a biography of Graham Collier and it was an opportunity to talk about and celebrate his career in jazz. As with so many musicians who came up in those years, Griffiths' introduction to jazz began in his teens at school.

"This is going to sound odd but I used to belong to a jazz club at East Barnet Grammar School," he tells me. "I had started doing a bit of playing around the area and got a call one day from someone who used to go to the local club. He was teaching art at another local school and he was instrumental in getting me to play with a band that one of his sixth formers ran. They had a gig at the Café des Artistes. I went along and they invited me to join the band."

It was at one of these gigs that Griff met a musician who would have a major impact upon his future direction in life, as he explains,

"One day, the baritone player couldn't make it and they had sent along this young chap who had come up from Plymouth. It was John Surman. John kindly invited me to go down and rehearse with Mike Westbrook and as a result I joined Mike's sextet. I have to say that John has been so important in the careers of so many musicians—certainly was in my case. The work I did with John was absolutely wonderful."

For several years, Griffiths pursued a dual career—jazz musician by night and at weekends and university lecturer by day. It was another chance occurrence that finally made him jump ship and plump for jazz over academia.

"One of the early gigs I did was with Buddy Rich," he tells me. "Buddy had come over with his band and, as was his wont, he had had a row with his lead trombone player. Dankworth's agency was given a call and I got invited to go down and play with him at Ronnie Scott's. The second night in, he said, 'Do you want to come back to the States with me?' At the time, I was lecturing in Economic Development. They wanted me to lecture full-time and do an exam-based PhD. I thought, 'Sod that!' I was determined never to take another exam in my life. If you had the choice between lecturing on Economic Development or touring with Buddy Rich, what would you do? I went with Buddy."

Buddy Rich stories are the stuff of jazz legend. However, Griff enjoyed his time with the orchestra. "I liked Buddy, I thought he was a very nice man," he says and continues, "He did seem to take quite a lot from me. There was an issue about coming in after a drum solo. We had to have somebody giving us a count, otherwise we didn't know when to come in. We had a meeting in the band to talk about this problem but I didn't realise that Buddy's daughter was in the room listening. That night I got a drum stick up my arse with Buddy saying, 'Is that alright, Malcolm?'"

Griff was on so many of those great British jazz albums of the late sixties continuing on into the nineties. He was in at the start of the Brotherhood of Breath, worked extensively with South African bassist Harry Miller in his group Isipingo, played in the big band of Canadian baritone saxophonist John Warren and with Mike Gibbs. Knowing that I was writing a biography of his one-time boss, Griff is tactful in response to my questions about his time with Collier.

"When I joined Graham's band he had a wonderful tenor player in Art Themen," he says. "And Henry Lowther was often there, which was nice. I am not absolutely certain what Graham wanted. All I did when I played with him was improvise with him the way I felt. You were in the band and you were expected to play your thing, I suppose. I've only ever played what I felt was right"

Asked how that experience compared with his other musical experiences, Griffiths waxes lyrical about his work with Stan Tracey and Mike Westbrook, "It was a joy for me to play all those years with Stan and, similarly with Westy, too. In fact, the last album I'm on with Mike, The Cortège, is a truly wonderful record with some truly wonderful pieces of music on there. I think the playing of the musicians...it's difficult music and they just play it marvellously. With Stan Tracey, I guess it was his determination to have a damn good rhythm section. If you imagine a cross between Duke Ellington's piano playing and Thelonious Monk—that was Stan. I spent a lot of my career playing in a band with two of the finest tenor players—Art and Don Weller—in the world. I thought they were just stupendous."

Reluctantly, he admits that he was not as keen on Collier's work, "I think that's fair enough. I don't know if this is going to tar me in some way but I just thought their music was better. What I will say about Graham was that he was a very good arranger. He knew his business where that was concerned but I preferred playing Stan's music or Mike Westbrook's."

Griffiths singles out the track "Erme Estuary" from Westbrook's The Cortège as one of his favourite musical moments. It is, in truth, a simply magnificent piece, beautifully structured and arranged, as it shifts through a series of movements. Phil Todd solos on clarinet supported by Georgie Born's cello, before Griff's dramatic entry. It's a classic moment and, given that The Cortège references New Orleans' funeral parades, offers a few moments of tailgate trombone that fits the mood to perfection. Later, on the Spanish-tinged "Leñador," he plays with spectacular fluency and attack. In fact, there are too many such moments from the trombonist's years with Westbrook to mention here. The more one listens to these records the more important his contribution seems. His strengths are even more evident on Westbrook's "pop-soul jazz" Love Songs, his elegance and poise matching an accuracy of articulation and a strong dramatic sensibility.

I ask about his time with Stan Tracey but the trombonist just wants to extol Stan's virtues and those of his fellow band members. Again, there many high-spots to pick from. One that should be at the top of the list, however, would have to be Griff's solo on Tracey's "Mainframe" from the Blue Note album, Portraits Plus. The trombonist stops the action with a cadenza that shifts into a duet with Dave Green on bass before returning to the theme. It is a fine dramatic moment, indeed. And then there's his lovely, skipping solo on "Peg-Leg Bates" and even more eloquent and explosive contribution to "Miff," both from Tracey's Salisbury Suite. It is easy to understand why band-leaders like Tracey, Westbrook and Collier looked to him to fill the trombone chair.

When it comes to his influences, however, Griffiths is one hundred percent clear—it's Duke and his trombonist Lawrence Brown. "I think Lawrence Brown is the greatest trombone player I have ever heard," he tells me, "absolutely wonderful. If I was influenced by anybody, it would be him, though it would be very hard to duplicate what he did. He was so superb. His range was incredible and his playing on the Billy Strayhorn tribute album (And His Mother Called Him Bill...) is glorious. Duke Ellington would be my biggest musical influence."

That leaves John Surman, the friend who really got him started. Griff shared a flat with Surman and John Warren in the sixties and the saxophonist included him in many of his groups. It is something for which he remains grateful. "Obviously, a lot of people appreciated John Surman's work and that gave the rest of us an 'in' and a chance to work," he says with typical modesty. "There's a record I did with John that just got reissued. Morning Glory—it sounds a bloody sight better now than it did at the time. The work of John Marshall and Chris Laurence is fantastic. What a wonderful rhythm section! All of the records with John, they all featured John Surman which made it always a wonderful experience. But on Morning Glory the way he just steams into that first solo. I thought, 'Hello, this is going to be a problem following that.'"

The track Griffiths refers to is "Iron Man" and he's right, Surman is straight out of the blocks. But this is a band album. The backing from Terje Rypdal, John Taylor and Chris Laurence and John Marshall makes this one of the great jazz-rock records of the period. But then Griffiths comes in backed at first just by Laurence and Marshall. He begins not at the high emotional point where Surman's soprano finished. He builds slowly, thoughtfully and as John Taylor on electric piano and then Surman and Rypdal join, he lets loose. That is why Surman and others chose Griff time and again.

Realising that the interview may have been quite demanding for him, I start to bring things to a close and return to Lawrence Brown. I suggest that Griff shares with his influence that fine combination of lyricism and attack. There is an embarrassed silence before he responds.

"That's kind of you to say so," and he pauses. "I suppose that is how I approach music."