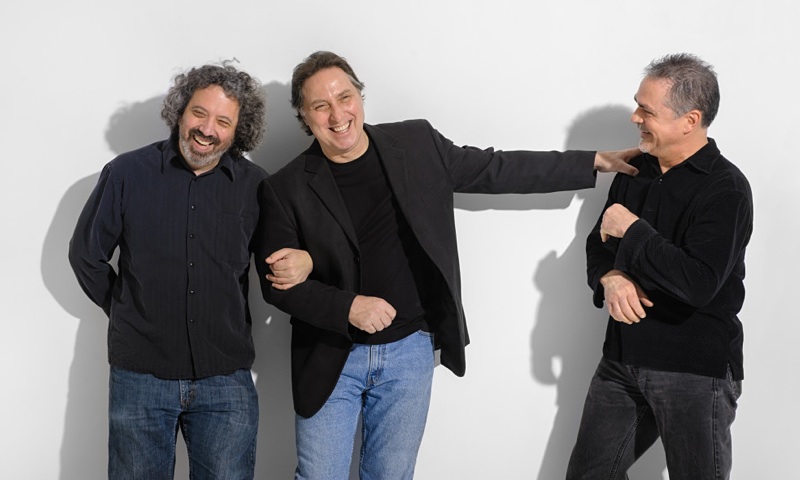 All About Jazz Founder and Publisher Michael Ricci recently innovated a world-wide program to facilitate and co-create musical events in the intimate setting of people's homes where the householders serve as hosts, hiring musicians to provide a day or evening of performance. The program will utilize the resources of Jazz Near You—an offshoot of All About Jazz which tracks and lists jazz events by geographical region—to bring together musicians with potential hosts, who will benefit by having a gathering that is intimate, social, and entertaining. Musicians will gain by being paid and having an opportunity to perform for an audience that really values their playing.

To kick off the new project, Ricci held the inaugural concert at his suburban residence, which also serves as the command center for All About Jazz. For the musicians, he chose the Jost Project, featuring vocalist Paul Jost and instrumentalists Tony Miceli on vibraphone and Kevin MacConnell on bass. The Jost Project is gaining increasing attention for their jazz versions of rock tunes of the '60s and '70s, tunes which are instantly recognizable to generations like the baby boomers who were relatively unexposed to the "jazz standards" of swing and bebop. Ricci wanted the music to appeal to a diverse group of listeners, and the Jost Project was a good choice. They drew an eclectic audience of friendly folks who listened with rapt attention, snapping their fingers, and roundly applauding solos. It is mind-blowing to hear these rock classics played in a swing tempo with all the mechanisms of the jazz idiom to embellish the tunes.

So an eclectic cadre of attenders, whose cars jammed up the Ricci driveway, had a terrific time while being exposed to the uniqueness of jazz. One of the features of a home concert is that the people and musicians co-mingle, and there was a great deal of informal conversation and networking before and after the performance, much more than you'd find at a nightclub or concert hall. To the credit of Ricci and his wife, Rosemary, the atmosphere was comfortable and relaxed. The quality of the hosting would seem to be very important in this type of venue, as would a good match between the listeners and the kind of music that is performed.

A Short History of Home Performances

Home and family have played a very important role in the evolution of jazz. (Jazz was early performed in a particular kind of house, one of ill repute, but we are referring here of course to the more typical family-oriented residence!) When African Americans and their new music, jazz, moved north and west in the first half of the twentieth century, budding musicians would study and jam together in people's homes, whether in Detroit, Los Angeles, Philadelphia, New York City, Boston, or any number of other cities. Harlem was a hotbed of such jam sessions, some of which coalesced around Thelonious Monk's apartment. Sonny Rollins, Jackie McLean, and other talents were products of these informal sessions. In Philadelphia, the guys and gals would gather at the family homes of the Heath Brothers, John Coltrane, and so on. A little later on, they would gather in New York at loft studios and in-home recording studios, such as that of Rudy van Gelder. Modern jazz would never have developed without these places where formality could be dropped and a relaxed, uncensored creative process could take place.

On another level, especially in Europe, the musicians would go to someone's home after a concert and play for a small audience of aficionados. One series of concerts that Oscar Peterson did were privately recorded with invited guests and became a jazz classic (Exclusively for My Friends, MPS, 1968). Such events were an offshoot of the musical "salon," a long-held tradition in European countries.

Another originating force for home concerts has been primarily economic in nature. A musician can pick up some good cash by playing at parties and events, especially when wealthy people are the hosts. Musicians in the Philadelphia area are always telling this reviewer about such gigs, notably on the Main Line, with its stately homes and well-heeled residents. Sometimes the hosts become patrons, covering the costs of recordings and other projects. Of course, there may be undue pressure to cater excessively to the host's tastes, a risk factor that also holds true for some recording dates and nightclubs as well.

So, home is where the jazz is, and Ricci intends to use web networking to facilitate a resurgence in home concerts wherever the best musicians go and devoted fans reside. Indeed, this may form the basis of a new jazz culture as the nightclubs become less lucrative than during the time when jazz was the prevailing form of music and audiences lined up around the block to get in. In Philadelphia, we have seen an attrition of jazz clubs both recently and in the decades following the so-called "British Invasion" of the Beatles and rock groups. That is just where home concerts and the Jost Project come in.

Paul Jost is a versatile and experienced vocalist who on this particular gig sang with passion and intensity, using scat, finger snapping, and other devices liberally to create rhythm, effect, and mood. Jost's dramatic style invoked a feeling of going back to the sixties. Through his interpretations, listeners easily heard reminders of heroes like Donovan, Paul McCartney, and Emerson, Lake, and Palmer. By contrast, vibes player Miceli and bassist MacConnell backed Jost with straight ahead bebop and post bop comping and accompaniment. It was remarkable how well the fusion of jazz and rock came together to create energetic and fascinating music, the hallmark of The Jost Project, as can be heard in their recently released CD, The Jost Project: Can't Find My Way Home (Dot Time, 2013).

The group started with a jazz emphasis with iconic guitarist Jim Hall's "Waltz New," a bebop contrafact superimposed over the chords of "Some Day My Prince Will Come." Jost's scatting was ingenious and sophisticated. The rest of the program was entirely devoted to rock, pop, and folk music. The group proceeded with Donovan's "Sunshine Superman," followed by a laid back version of Paul McCartney's ballad, "Maybe I'm Amazed." The energy level then escalated as the group took on Emerson, Lake, and Palmer's classic "Karn Evil" and Iron Butterfly's desperate "In A Ga Da Da Vida" (translation, "In the Garden of Eden"). Miceli and McConnell did sophisticated jazz improvisations, almost as if Milt Jackson and Percy Heath from the Modern Jazz Quartet were present to guide them. Vocalist Michelle Lordi made a guest appearance, singing Glen Campbell's signature "Wichita Lineman" (composed by jazz standard writer Jimmy Webb) in an unembellished slow tempo legato interpretation (a metaphor for the long highway telephone lines?) that was diametrically opposed to Jost's eclectic style.

After a wine and cheese break, the second set began with the Beatles' perennial "We Can Work It Out" followed by the equally familiar "Good Vibrations" by the Beach Boys. Then, Jost took out his harmonica for a surprising medley of two folk songs, "Shenandoah" and "She Moved Through the Fair." These ballads, popular at folk festivals of the time, highlighted the way the Jost Project can transform music from almost any genre into jazz. But the group revved up for a rapturous rock climax with Procol Harum's "Whiter Shade of Pale," with its psychedelically transformed theme from J.S. Bach's "Air on the G String," the Stylistics' "People Make the World Go Round," and the Beatles' "Come Together." The Jost Project amply proved its thesis that jazz interpretations of rock classics make for exciting music which is powerfully evocative of the Woodstock and Fillmore East/West epoch whose musical language was quite different from jazz.

Home Concerts and the Future of Jazz

Modern jazz emerged in the context of the nightclubs and LPs that replaced the dance halls and 78 rpm records of the swing era with intimate opportunities to play and hear extended sessions that sometimes went on well into the night. Concert halls and festivals added glitz and a wider audience to these developments. Subsequently, digital recording and the internet made it easier to produce high quality tracks for CDs and downloads, expanding the possibilities for recording and distributing music and generating creative experimentation. In the meantime, jazz audiences downsized from the popular consumption of the swing era to a form of music that appealed mostly to a particular fan-base, more sophisticated than the average consumer. Now jazz is at a stage where, to survive as an art form, it must develop new venues and forms of expression that stimulate the creative process while maintaining an appeal to wider audiences.

Home concerts may serve just such purposes. They make the hosts and attenders more active participants in the music. Musicians and audiences interact more intimately, sharing ideas and interests in live in-person conversations. They afford jazz groups opportunities to explore diverse musical pathways such as the Jost Project. In such ways, they may help create new ideas and new audiences. Music is a form of communication, which is optimized when people come together in a setting of a family and tribal nature. All About Jazz has pioneered in fostering the development of jazz through the internet, and the home concert is a logical next step in bringing new life to the jazz community.