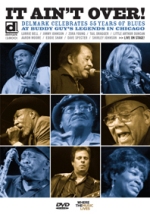 It Ain't Over! Delmark Celebrates 55 Years of Blues at Buddy Guy's Legends in Chicago
Delmark Records
2009

Recorded live in Chicago at guitarist/vocalist Buddy Guy's Legends on March 7, 2008, It Ain't Over! is a celebration of Delmark Records' 55th year in the record business. Label founder Bob Koester presents an all-star roster of legendary Chicago blues artists for an unforgettable evening of down-home soul.

The festivities start out with a jolt of nastiness courtesy of blues diva Zora Young singing her own "Til The Fat Lady Sings," accompanied by legendary bassist Bob Stroger and powerhouse guitarists Lurrie Bell and Scott Cable. Smooth-toned vocalist/guitarist Jimmy Johnson brings forth a slick urban sound on "Cold, Cold Feeling" and "You Don't Know What Love Is," a couple of minor-key blues that allow Johnson's emotive, razor-sharp string bending to shine. Backing up Johnson is a highly sensitive rhythm section led by guitarist Dave Specter.

Boogie-woogie pianist Aaron Moore, a mainstay on the Chicago scene since the 1960s who plays in the style of Roosevelt Sykes, pounds the keys and shouts with authority on two of his own compositions, "Wading In Deep Water" and "Why You So Mean To Me." The Greenville, Mississippi native is accompanied lightly by drummer Kenny Smith. The late Little Arthur Duncan blows his harmonica and sings with characteristic rasp and moan on "Pretty Girls Everywhere" and "I Got To Go"—the latter being a staple of the late harmonica great Little Walter, a role model to Duncan. Although he remains seated during the performance, Duncan's energy level is quite astonishing considering this would be his last recorded performance. Duncan passed just five months after filming.

Following an onstage presentation of a Delmark Day proclamation from the city of Chicago to Koester, guitarist Bell returns to the stage to front a couple of numbers of his own with Stroger, drummer Smith and pianist/organist Roosevelt Purifoy. Bell digs in deep, singing and playing his heart out on "Don't You Lie To Me," a groovy shuffle made famous by Albert King in the 1960s, and the Lowell Fulsom slow-blues anthem "Reconsider Baby. For all of the electrified guitar posturing heard during the show, Bell's brilliant six-string excursions on his overdriven Gibson 335 stand out as the most inspired.

Bell reaches deep into his dirty bag of tricks backing up vocalist Shirley Johnson on "As The Years Go Passing By." Johnson's matter-of-fact delivery is ripe with confidence and pathos. Gut-bucket tenor saxophonist/vocalist Eddie Shaw swings hard on the jumping "For You My Love" and the 1957 Jimmy Reed shuffle "Sun Is Shining." The latter features a romping piano solo from Purifoy.

Cowboy-hat-wearing Tail Dragger (James Jones) mingles with the crowd and brings the show to a resounding close with the help of ace harmonica player Big D and guitarist Kevin Shanahan. A sure-fire crowd pleaser, Tail Dragger pleads and moans in the style of legendary blues entertainer Howlin' Wolf.

An enlightening commentary by Koester is included as a special feature playback option. Blues enthusiasts will be fascinated by the first-hand account Koester gives of Delmark's history and philosophy. More than a record label birthday bash, It Ain't Over! is a thorough account of the current state of affairs in Chicago blues.

Tracks: The Fat Lady Sings; Cold, Cold Feeling; You Don't Know What Love Is; Wading In Deep Water; Why You So Mean To Me; Pretty Girls Everywhere; I Got To Go; Mayoral Proclamation; Don't You Lie To Me; Reconsider Baby; As The Years Go Passing By; For You My Love; Tribute To Bob; Tend To Your Business; My Woman is Gone.