By George Kanzler
April 7, 2009
Sign in to view read count 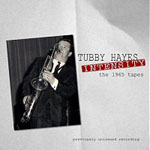 The late '50s and early '60s were a great time for jazz at clubs in downtown Manhattan. It was a heyday for tenor saxophonists; such giants as Sonny Rollins, Al Cohn, Zoot Sims, Sonny Stitt, John Coltrane, Johnny Griffin, Gene Ammons, Wayne Shorter, Booker Ervin and Tubby Hayes could be heard at cozy spots like New York's Village Vanguard, Five Spot, Half Note and Bohemia. Hayes was the only foreigner, an Englishman who was an occasional musical import before The Beatles. Hayes subbed for Paul Gonsalves with Duke Ellington in London and recorded with such top American jazz players as Clark Terry, Rahsaan Roland Kirk, Dizzy Reece and Gary McFarland. That he was booked into the same downtown clubs as the tenors mentioned above attests to his reputation.

Intensity: The 1965 Tapes was recorded at London's Ronnie Scott's jazz club, with the Hayes Quartet of the time: Terry Shannon (piano), Jeff Clyne (bass) and Benny Goodman, the British drummer. Hayes stretches out on three tracks totaling over 62 minutes, providing a rare example of his famous stamina and ability to create long improvised solos with a thematic continuity and logic reminiscent of Rollins. Those traits are especially evident on the fast blues "Mini-Minor," where he takes 35 choruses, many seeming to flow directly from the preceding ones, the whole coalescing into a satisfying statement. The slower, walking ballad tempo of "Alone Together" demonstrates his robust ability to swing at heartbeat speed, a trait that explains his fondness for Zoot Sims. "Sometime Ago," the longest track, is a modal waltz that finds Hayes on flute (he also played other reeds and vibraphone), an instrument he played with a raw passion while incorporating some of the innovations of Dolphy and Roland Kirk.

Because of his propensity for long, intense solos, Hayes, who died at 39 in 1973 after years of deteriorating health, is often compared to Coltrane. But his energy was more one of vitality than questing. He was more like Zoot or that other tenor famous for his long solos, Gonsalves, who also recorded with Hayes.

Mini Minor; Alone Together; Sometime Ago.