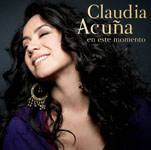 It's been roughly five years since Chilean vocalist Claudia Acuña released Luna (MAXJAZZ, 2004), a brilliantly conceived meeting of minds with pianist/co-producer/co-composer Jason Lindner, her strong ally coming up in the New York Smalls scene of the '90s. In the interim, Acuña made In These Shoes (ZOHO, 2008), an overtly Latin-pop collaboration with pianist Arturo O'Farrill, plus inspired guest appearances on David Gilmore's Unified Presence (RKM, 2006) and Joey Calderazzo's Amanecer (Marsalis Music, 2007). En Este Momento represents a long-awaited return to the jazz spotlight and an auspicious move to Marsalis Music.

The CD features a streamlined quintet with Lindner once again at the core, layering lush atmosphere on piano, Fender Rhodes, organ and Mellotron. The producer this time is saxophonist Branford Marsalis, who gets the best from Acuña's punchy, live-sounding band, with Israelis bassist Omer Avital (another Smalls colleague), Venezuelan guitarist Juancho Herrera and Detroit drummer Clarence Penn. From any given standpoint—jazz, international, pop—En Este Momento rises to the level of Luna in its tuneful appeal, exacting ensemble sound and expressive potency.

In adapting three songs by Víctor Jara, brutally murdered in Chile's 1973 coup, Acuña strikes something of a political note, which shouldn't go unremarked in these first 2009 months of the Obama administration. While Jara's anthemic paean to Ho Chi Minh ("El Derecho de Vivir en Paz") is hard to swallow lyrically, the slow and solemn arrangement works well. As if to turn the page on hopeless times, Acuña also includes Ruben Rada's "Sueño Contigo," a stirring example of Uruguayan candombe, and Jara's "El Cigarrito"—both irrepressibly happy, immaculately played, and demanding of repeated listens. Songs from Cuba, Mexico and Argentina extend the disc's idiomatic reach. Acuña's "Tulum" and "That's What They Say," co-written with Herrera and Lindner respectively, work a distinctive sort of magic as well—keening legato melodies, dramatic releases of tension, and an emotive outline that will come to be widely recognized as Acuña's signature.