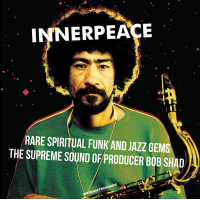 It took a few years for producer Bob Shad's newly formed Mainstream Records to nail its direction in the 1960s. A less than auspicious start was releasing the first singles by the latter-day Trump-boosting halfwit Ted Nugent. A better move, given hindsight, was releasing the debut album by Janis Joplin's Big Brother & The Holding Company. But by the end of the decade, Mainstream had hit its stride as a platform for jazz—in particular freedom jazz / spiritual jazz, with which it took its place in the sun alongside Stanley Cowell and Charles Tolliver's Strata-East, Bob Thiele's Impulse! and Joe Fields' Muse.

The albums Innerpeace is drawn from are as rare as hen's teeth in 2018. The closest most listeners will have got to them will be samples on discs by hip hoppers such as De La Soul. Which makes this outstanding 67-minute compilation doubly welcome. Also not to be missed: WeWantSounds' reissue of Buddy Terry's Mainstream debut, Awareness (1971), previously reviewed here.