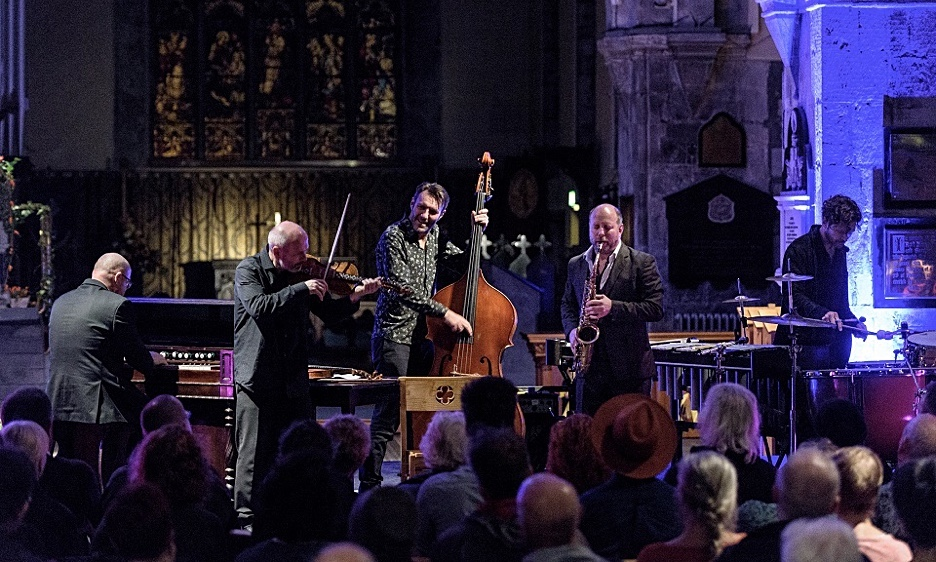 By IAN PATTERSON
October 16, 2019
Sign in to view read count

A good festival, like Galway Jazz Festival, opens up the heart. Journeys of the heart are important. —Leo Hallissey, Educator, festival curator, activist

Bat song may be a first at a jazz festival, but then they do things differently here in Galway. Bats were in and plastic was out. No plastic laminates or cable ties, no plastic on outdoor advertising, no plastic wrapping on backstage food, and no plastic bottles were permitted by the organizers of GJF19. With carbon footprint awareness the name of the game even the festival programme was printed with one hundred per cent vegetable oil-based inks. One in the eye for the petroleum industry.

Greta Thunberg would have been proud of the GJF19's efforts to do its bit for the planet, though she might be surprised to learn that her dog Roxy provided the inspiration for a piece of theatre/musical improv featuring actor and human rights activist Donal O'Kelly—one of three commissioned works by the festival. The other two, featuring singer Lauren Kinsella and harpist Una Monaghan, threw improvisational spanners of the best kind into the world of Irish traditional music.

Musically, GJF19 was as diverse as the city's culinary offerings. From swinging piano trio and funk quartet to big band jazz, and from solo guitar to vocal jazz standards— there was a little of everything. David Lyttle's Drum 'n' Tapes saw the Irish language serve as a launching pad for the drummer's real-time improvisation. Kaja Draksler and Eve Risser explored composed and improvised dialog on two pianos. Renaud Garcia-Fons and Claire Antonini married double bass and medieval theorbo, while contemporary gamelan, hip-hop and electronic experimentation lent a modernist sheen to GJF19.

The bandoneon was centre stage with Daniele di Bonaventura, whose quartet visited international songs of resistance. Modern jazz put its best foot forward with Trish Clowes' My Iris. Hardanger fiddler Nils Økland's quintet blurred the boundaries between Nordic tradition and innovation while the inimitable Sue Rynhart served up her potent brew of sung-poetry and jazz-spun folklore. Guitarist Andreas Varady showed why he was, in 2011, the youngest musician ever to headline London's Ronnie Scott's.

Almost sixty performances over four days were held throughout Galway in theaters, cultural centers, pubs, restaurants, churches, shops, and Galway University Hospital. Whilst GJF19 could boast plenty of international glamour, the healthy number of Irish artists was testament to the festival's belief in, and support of, Ireland's deep well of creative talent.

Workshops, jazz film, climate-related book talk, record fair and tree-planting made for an action packed, varied and sociable weekend that not even the threat of Storm Lorenzo, barreling in over The Atlantic Ocean, could upstage.

And the bats? The Galway Bat Group led a dusk tour through the bat's stomping ground, the creatures' high-frequency chatter picked up by special electronic detectors. This educational outing was part of GJF19's commitment to preserving and protecting the natural environment. First awareness, then action.

The five-day festival pulled away the chocs on Wednesday. This report covers events from day two.

Nourishment for Heart and Mind

The official opening of GJF19 took place in The Kitchen where, as has become traditional, the Headford Music Works Ensemble regaled everyone with a few jazz standards. This thirteen-piece string and brass ensemble was joined by David Lyttle on drums and Cormac McCarthy on piano. Saxophonist Matthew Berril, one of the main figures behind GJF, led the group in a polished collective performance, with vocalist/trumpeter Catriona Murphy taking the lead on "Autumn Leaves" and Roisin Mulliez shining on "Summertime."

GJF Artistic Director Ellen Cranitch then introduced activist and environmentalist Leo Hallissey to address the informal gathering. For the past thirty-five years Hallissey has run the Conamara Bog and Sea Weeks in Letterfrack, festivals that bring together all manner of creative artists, scientists and chefs together in a celebration of nature, creativity, respect and kindness.

"Every young person has the right to be involved in the arts," Hallissey said, going on to express his simmering anger at the notion that the arts have somehow to be justified. Walking into Charlie Byrne's bookstore in Galway town centre, Hallissey described stumbling upon Roisin Mulliez singing "Bye Bye Blackbird." It was, he said, a very poignant moment because as a race we are saying lots of goodbyes, to numerous species across the planet, to major habitats, goodbyes to entire cultures. These are, he reminded the listeners, dangerous and threatening times.

In the face of such negative developments, there is ever greater need for spiritual nourishment and activism. That can come from the arts and from taking care of the environment. Even the smallest gestures, Hallissey said, taken collectively, can move mountains. A good festival, like Galway Jazz Festival, opens up the heart, Hallisey said. "Journeys of the heart are important."

It was a journey of the heart and mind for acclaimed singer Lauren Kinsella in this commissioned work for GJF19. Challenged to explore traditional Conamara sean-nós— the ancient tradition of unaccompanied singing—through a jazz prism, Kinsella had to go back to her Irish language roots to tackle traditional songs such as "Roisin Dubh," "Uileacan Dubh O" and "Maire Ni Eidhin."

Kinsella, however, is not one given to following the easiest path and she steered the songs into less easily mapped, and altogether darker terrain. Her vocal improvisations—stream-of-consciousness, non-syllabic voicings—were punctuated by pristine soaring notes and her diversions invited diverse responses from her colleagues— brooding and introspective on the one hand, fractured and feverish on the other.

Like an expert seamstress Kinsella wove the contrasting threads of tradition and innovation to conjure a striking sonic tapestry, boldly original in concept, haunting in its stark beauty.

Galway is a compact city and all twenty-one venues hosting gigs at GJF19 were within easy walking distance. It was a mere hop and a skip from An Taibhdhearc to Black Gate Cultural Centre, where Carole Nelson and Maria Walshe, aka Zrazy, beguiled the basement audience with a lesson in the art of the duo.

Honing their craft for over thirty years, pianist Nelson and singer/percussionist Walshe are the real deal. Award-winning and globe-trotting, they have earned the right after three decades to pick and choose their gigs. It was something of a privilege, therefore, to catch the duo in such an intimate venue.

Sparkling technical chops and pronounced empathy besides, Zrazy also boasts first-rate songs. The epic, blues-inflected "U Can" could have come from the pen of Jimmy Webb, while the duo was equally at home delving into sunny funk, deft balladry and radio-friendly pop tunes. GJF Artistic Director Ellen Cranitch brought her flute to the party on a couple of numbers, her jazz and funk improvisations on "Rain" and "Hot Sun" juicing things up. Not that the star duo lacked spark. On the contrary, Nelson's spicy rhythms and melodious soloing were a constant joy, while Walshe's grooving percussive rhythms would make way for sassy flute and harmonica improvisations.

Introducing the slow-grooving blues-funk set-closer "Down With Jazz," Walshe read an extract from a 1934 letter penned by The Gaelic League and addressed to the Irish government. It denounced jazz as being "against Christianity, learning and the spirit of nationality." It urged clean-living Irish "to boycott foreign dances." The memory of the Catholic Church's anti-jazz movement of the 1930s lives on in a sense, as it has now inspired a jazz festival and a song of the same name.

As long as there are musicians and songwriters as cool and provocative as Nelson and Walshe then music will always trump the Church and State party-poopers, the ultra-nationalists and xenophobes. As one audience member remarked during the standing ovation: "That was way more fun than mass."

Una Monaghan has more strings to her bow than there are strings in her harp, working in a wide variety of settings whose common denominator is experimentation and the pushing of traditional boundaries.

Laptop drone underpinned ethereal melody in the simple though affecting opening number. From using technology as enhancement, Monagahan progressed to interacting with a computer programme in a sort of improvisational call and response. Signals from a motion sensor glove triggered sonic patterns from the computer, which in turn provoked improvisation from the harpist.

Guest vocalist Pauline Scanlon, a traditional Irish singer, joined Monaghan on a three-part suite in response to the gender imbalance in Irish traditional folk music. Statistics, the recorded experiences of Irish female musicians, and the poetry of Maureen Boyle fused in a powerful—and shocking— fifteen-minute protest number that called out misogyny, sexism and the institutional discrimination against women in Irish traditional music circles.

Translating the 2017 statistics into musical notes, Monaghan demonstrated via a tune and the 'sharing' of notes, the much higher proportion of male artists (86%) compared to female artists (14%) represented on Irish trad festival stages. The tune representing women's participation was minimalist indeed. Major award winners in music categories and the leaders of sessions trails during the week, it came as no surprise, were nearly all men.

Scanlon sang Boyle's "Weathervane," with its echoes of the scandalous Magdalene Laundries, where single Irish mothers were robbed of their infants and subjected to forced labor. She then related first-hand accounts of women's experiences in the Irish trad scene, where patronizing and dismissive comments by male peers were the least of the outrages. The third part of the suite was a ghostly mix-tape of famous Irish songs melting into one another.

The obstacles facing women in Irish traditional music as described by Monaghan and Scanlon would have sounded very familiar to women jazz musicians at any point in the past century, and to some degree, still today. The panorama has changed for the better in jazz, it has to be said, with more women leading bands, writing music, playing major stages, curating festivals and appearing on the covers of jazz magazines than ever before. There is still some distance to travel, however, before jazz can live up to its boast as a democratic music, one of freedom and equality.

Even those who didn't know there was a jazz festival going on in Galway will hardly have been able to avoid it, with free jazz gigs enlivening packed pubs, coffee shops and restaurants at all hours of the day. One of Galway's most popular drinking venues, Blue Note—a pub with a live music space —was packed to the rafters early on Friday evening for Catch The Lemon. Keyboardist Jos Kelly, bassist Bruno Pierucci, drummer Brian Gosker and guitarist Alvaro Soto delivered a blistering set that proudly raised the flags of jazz funk and jazz rock.