BY JEROME WILSON
October 17, 2019
Sign in to view read count 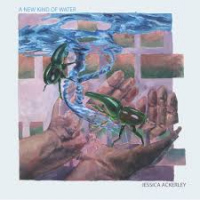 On several tracks Ackerley's thick, percussive picking creates a simmering jumble of sound along with Muntz's and Boegehold's work before Manning comes in and spreads a broad layer of thick alto sax. On "Space, Frame, Contain" the trio's playing has a contemplative feel with Ackerley's guitar carrying a courtly lilt reminiscent of Jerry Garcia. "Sfumato" has a similar dynamic, but with a slower tempo and alto blown in low wisps. "Dotted" starts as a more random piece. The guitarist bends and resonates solitary notes, her playing gradually getting faster and more complex until the bass and drums come in to give a twisted but melodic shape to the music.

Sarah Manning's contributions throughout the CD are uniformly impressive and she gets a spotlight on "An Elephant Bathing on a Friday Afternoon," blowing a warm, folksy melody with Ackerley's chords echoing around her. "Trifold" is the closest thing here to conventional jazz. Ackerley and the rhythm section keep a walking shuffle beat going that approximates the rhythm of Eric Dolphy's "Hat And Beard" and Manning blows sour, warbling bursts before everyone folds into a harsh but subdued prog rock tapestry.

"Trifold" shows some of the heavier and more angular aspects of this music, something that really comes to the fore with "A Meadow Land, Towards A Closing Door." Here intense rock guitar strumming is combined with hammering alto and crashing rock rhythms like an intense King Crimson passage. Ackerley's solo then loops and turns slowly over tumbling rhythms, Muntz takes a subdued solo and everyone decreases to low volume before rumbling back up to support Manning's searing howls. "Partial Scene" goes in the other direction. It starts with quiet trio play, cuts to loud, repeated metallic strumming, then gives way to slow but inevitable trio tangles. The work momentarily returns to its lyrical beginnings before finishing up with heavy electric guitar shredding.

Jessica Ackerley's music is a slippery blend of melodicism, intensity and improvisational byplay, a mixture of the worlds of jazz, prog rock and folk with a hypnotic, slow-burning intensity. It has moments of ethereal beauty and crunching power, and showcases a guitarist with a strong identity.